When it comes to ocean outreach, Dr. M is a giant: a rum-loving, goggle-wearing outreach giant, one with whom I had the pleasure of working on his most massive (though by far not his only) science-meets-outreach success. Dr. M was the lead author on a groundbreaking 2015 review paper called “Sizing Ocean Giants,” cataloging the largest members of many marine animal groups. He was kind enough to include me as a participant, and the experience was beyond inspiring. I’ve never seen someone so seamlessly integrate teaching, outreach, and research, and all with remarkable results.

Best I can tell from sleuthy internet sleuthery, Dr. M first realized there was a need for such a paper sometime around 2006, a full nine years before publishing “Sizing Ocean Giants” (talk about commitment!) Why do think 2006 was the golden year? Because he wrote about it, briefly, in a 2011 article for Wired on the value of taxonomists:

In 2006 I set out to explore how biodiversity and body size were linked among animals. To do so I needed information on the largest- and smallest-sized species for each group of animals — something surprisingly not readily garnered from the published literature.

So what did he do? He published the literature. How? He lead a team of five undergraduates on a semester-long adventure to solve the mysteries of the biggest ocean beasts. All five undergrads earned authorship on the paper. In conceiving the idea, Dr. M had a teaching vision:

The students would become experts on their individual animals. Part of that coming about by searching the literature for body size data. Part coming from sharing that knowledge with the public. I would ask each student to contribute blog posts to storyofsize.com and that would serve as our core of outreach. I would require each student to engage the science community and public via Twitter.

But the really amazing part, at least to me, is that it worked. I mean, it’s a beautiful idea, but actually pulling it off? Dr. M made it happen, coordinating his team of five students and 10 scientists to publish the 69 page manuscript, complete with publicly available dataset and computer code to back it. The paper rapidly became one of the journal’s top marine biology papers. Science, education, outreach: I’ve heard a lot of people talk about ways to combine these goals, but Dr. M did it, and he did it beautifully.

And the thing is, I don’t really know if Dr. M appreciates just how impactful his outreach is. My experience with Sizing Ocean Giants left a lasting impression. When it was all over I thought, ‘I want to do that some day. I want to be like that guy.’

And I’m not the only one. I wasn’t even looking for examples of people whose lives have been changed by Dr. M when a friend of mine told me this:

I read [DSN] at 15 and it made me want to do what I do. Way back when it was part of this amazing community of science bloggers called “Science Blogs”- I subscribed to DSN, as well as many others through Google Reader (this amazing, now non-existent RSS aggregator). I followed them through their migration…for this science obsessed teenager, this was the perfect place for me to read about things I was fascinated by. I wanted to be a marine biologist, but this helped to narrow the scope, and here I am!

She is now a PhD candidate studying deep-sea animals.

I don’t know how many people Dr. M has touched with his humor, dedication, and intellect. But counting me and my friend–well that’s two right there. Add to that all the folks he has reached through Sizing Ocean Giants and Deep-Sea News? I bet my friend and I are in good company. So thank you Dr. M. Thank you for your Giants paper, thank you for your leadership, thank you for helping to change science outreach for the better. 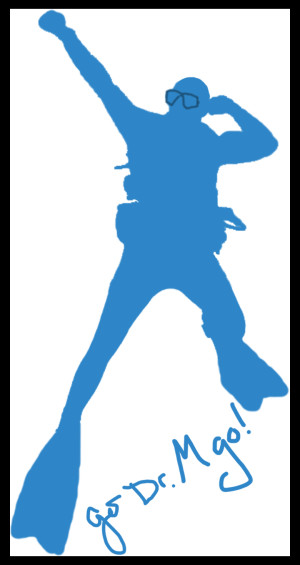 One Reply to “Dr. M: An Ocean Outreach Giant”