What better way to kick off a “Tribute to our Leader” theme week than with Dr M’s favorite type of post? That’s right, a listicle.

Scientists aren’t always up in their research 24/7 – we have personalities too! Kickass personalities, in fact, that don’t always come across on the internet. For those of you DSN readers that haven’t had the pleasure to meet Dr M in person, we want to give you a taste of what you’re missing. So here we present our Top Ten Facts about Dr M:

Dr. M is slightly obsessed (UNDERSTATEMENT) with old skool rap and hip hop – he can talk for hours about his spotify playlists. His social media feeds are an endless linkfest of Youtube videos. Including some pretty weird ones, like this:

Like a true southern gentleman, Dr M is always impeccably dressed. If a summer garden party suddenly materialized in the middle of the workday, just hand him a Mint Julep and he’ll fit right in. Exhibit A:

In fact, Dr Mr often schools ME about fashion. He leaves me googling things about men’s fashion that I’ve never heard of, like “Seersucker suit”. Such swank is unheard of in a scientist! And his dress sense boils all the way down to his accessories, like his very colorful and diverse sock collection:

3. Science of the South

Dr M has recently started cheating on DSN with another blog affair: Science of the South. That’s OK, we don’t judge him for it. In fact, we’re in constant awe of his productivity. Does he sleep? The Science of the South is Dr M’s new project that aims to link southern culture with scientific explanations. It involves a lot of road trips, pie-cooking and pie-eating. If you love DSN, you should check it out!

Dr M is the only person I’ve met who understands my obsession with stationery, pens, and post-it notes. I’ve never seen a scientist with a desk so clean; there is never a paper out of place. Again, we ask: Does he sleep? I aspire to this level of tidiness but can never quite get there.

5. Connoisseur of All the Alcohols

Port, wine, bourbon, rum, you name it: Dr M has tried it, and has an opinion about it. In fact, he worked a side job at a wine shop in his younger days – and he has quite the sophisticated palate because of it. In marine biology, knowledge of (and access to) alcohol is almost as important as the science. Take this post, for example (which includes a great cocktail recipe by Dr M). More recently, Dr M has schooled me on All the Ports when we spent a day meandering through tasting rooms in Oporto, Portugal:

Did you know that Dr M designed the DSN site from scratch? The logo, the WordPress theme, the layout, the color scheme: he’s the mastermind behind all of it. Now you know, and you can revel in all the DSN web design glory. Design skills are an overlooked – but very important! – part of being a scientist. I mean, c’mon, just look at Dr M’s professional website. Is that not the greatest choice of fonts you’ve ever seen?

Dr M is not shy about his diving skills – he’s SCUBA’d on the Mid-Atlantic Ridge in Iceland, with Whale Sharks in Mexico, and on countless tropical coral reefs. But my favorite SCUBA picture is from the time we had a DSN retreat and he dived at the Georgia Aquarium:

Thinking back, most of my dining experiences with Dr M have involved him trying some sort of weird meat. I’m not sure if this is coincidence or if this is how he eats all the time. We dined on seabirds and marine mammals in Iceland, and more recently I watched him eat a coil of flaming sausage in Portugal (which he of course turned into a GIF).

Internet memes are almost as prominent as old skool hip hop videos in Dr M’s social media feeds. And his blog posts. And his Tweets. He probably has meme printouts adorning his office walls too. So here we throw in Dr M’s favorite meme, Research Wahlberg: 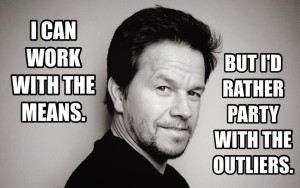 And now here’s where my Top Ten list gets all sappy. Above all, Dr M is our tireless leader here at DSN, and someone who serves as a source of infinite inspiration. We’ve all learned many things from him over the years – about life, about science, about outreach and writing. We all felt it was time to remind him of this fact, and remind him of how important he is to so many people. Marine Biology – and science in general – wouldn’t be the same without Dr M.

3 Replies to “The man behind the science: Top 10 Facts about Dr M”