To any one who, for the first time, sees a great stretch of sandy shore covered with innumerable ridges and furrows, as if combed with a giant comb, a dozen questions must immediately present themselves. How do these ripples form? Are they made and wiped out with every tide, or do they take a long time to grow, and last for many tides? What is the relation between the ripple and the waves to which they owe their existence?

LADY FLUID DYNAMICIST ALERT! LADY FLUID DYNAMICIST ALERT! Let’s just say I was absolutely thrilled to open Google this morning and discover that today’s Doodle was of Hertha Marks Ayrton, a pioneering scientist, engineer and fluid dynamicist. Her list of accomplishments are long. She explained light bulb popping and hissing by experimenting with electric arcs and patented a device for dividing lines into equal parts. Although she was the first woman to be nominated but not elected to the Royal Society of London (due to some dubious issue with her being married), she did become the first female admitted to the Institution of Electrical Engineers (IEE) in 1901. She was also the first female to win the Hughes Medal in 1906. Only one other woman has won the same award, 102 years later in 2008!

But what really captivated me was her paper “The origin and growth of the ripple-mark.” It is beautifully written with a sense of wonder that is sorely lacking from scientific papers these days.

The solution of the problem cost me several weeks of observation and experiment, yet it was absurdly simply when it came to me. It was that a single ripple, existing alone, in otherwise smooth sand, initiates a ripple on either side of it, that each of these ripples produces another on its farther side-these in turn originate on their farther sides, and so on, till the whole sand is ripple-marked.

I love the nod to the difficulties and frustrations inherent in the scientific process, and her ultimate reverence of scientific discovery. She then goes on to show how initial ripples are formed, their growth and the various parameters affecting their size and orientation in a series of tank experiments. The illustrations accompanying the manuscript are also delightful.

Vortices that brush the bottom, removing particles to form hollows and depositing particles downstream to form bumps leading to ripples. 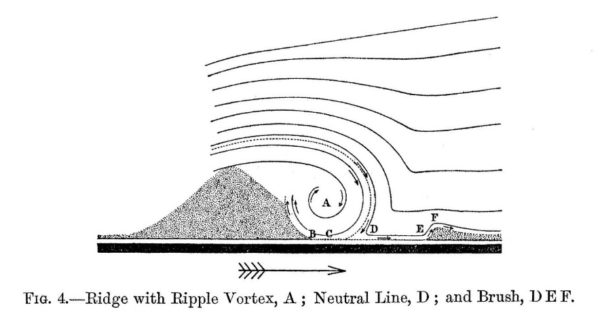 Ripple creation by oscillatory flows like tides (This handwritten font must have inspired Edward Gorey!) 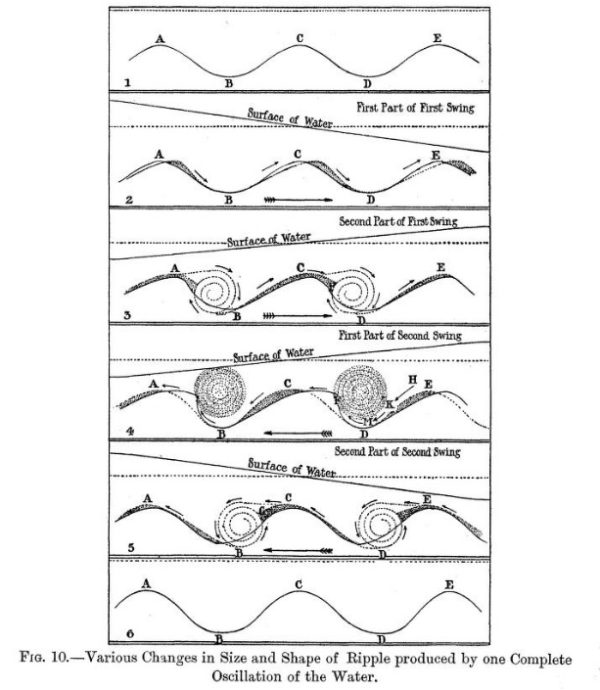 Ripples were not Ayrton’s only foray into fluid dynamics. She also did experiments that showed theories on residual motion in stationary waves, pressure changes by vortices formed by water flowing over obstacles, and the relation of skin friction to vortice coupling were correct!  Not to mention the invention of the Ayrton Fan, which removed poisonous gas from WWI trenches by creating eddies. All in all, she was a pretty remarkable woman and her Google Doodle homage is well-deserved.

Ayrton, Hertha. 1908. “On the Non-periodic or Residual Motion of Water Moving in Stationary Waves”.Proceedings of the Royal Society of London. Series A, Containing Papers of a Mathematical and Physical Character 80 (538). The Royal Society: 252–60. http://www.jstor.org/stable/92896.

Ayrton, Hertha. “The origin and growth of ripple-mark.” Proceedings of the Royal Society of London. Series A, Containing Papers of a Mathematical and Physical Character 84, no. 571 (1910): 285-310.

Ayrton, Hertha. 1915. “Local Differences of Pressure Near an Obstacle in Oscillating Water”. Proceedings of the Royal Society of London. Series A, Containing Papers of a Mathematical and Physical Character 91 (631). The Royal Society: 405–10. http://www.jstor.org/stable/93511.

Ayrton, H.. 1926. “Primary and Secondary Vortices in Oscillating Fluids: Their Connection with Skin Friction”. Proceedings of the Royal Society of London. Series A, Containing Papers of a Mathematical and Physical Character 113 (763). The Royal Society: 44–45. http://www.jstor.org/stable/94582.

Ayrton, Hertha. 1919. “On a New Method of Driving Off Poisonous Gases”. Proceedings of the Royal Society of London. Series A, Containing Papers of a Mathematical and Physical Character 96 (676). The Royal Society: 249–56. http://www.jstor.org/stable/93844.