The story of sea salt. It’s a story of geology, endurance, and erosion. Unfortunately, this story seems to be unknown to several persons of dubious copious fame. And they’ve taken it upon themselves to create a menagerie of strange, kickass and even gross theories on ocean salinity. Join me now on a strange and wondrous trip to debunk some bad celebrity science. 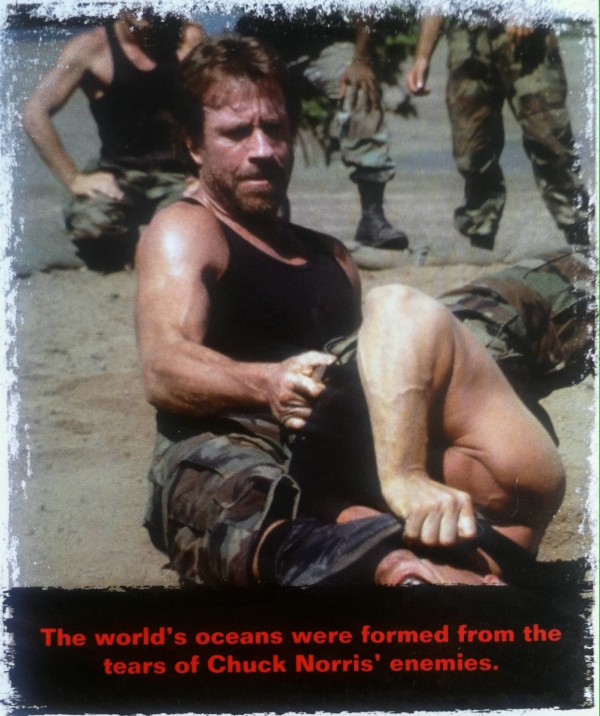 The world’s oceans were formed from the tears of Chuck Norris’ enemies.

A normal human sheds about 100 liters of tears in their lifetime. The volume of the ocean is 1,335,000,000 km3. To fill the ocean Chuck Norris would need about 13 quintillian enemies. However, there are only about 7.5 billion people on earth. Either 99.99999995% of Chuck Norris’ enemies are aliens, or Chuck Norris has extracted enough tears to fill 5000 olympic swimming pools from each and every human that has ever lived. Either way, don’t f**k with Chuck.

The reason why the oceans are salty is that’s what’s needed to hold the water onto the Earth. If that didn’t happen the water would levitate right off the Earth, that’d be the end of it. The salt holds it on, in the same way it holds it into our body.

DO I NEED TO BATHE IN RARE HIMALAYAN ICELANDIC SALT SO I DON’T FLOAT AWAY? TELL ME AVOCADO MANBUN MAN!!! It appears Avocado Manbun man clearly denies the existence of freshwater lakes, which due to their lack of salt, must be floating away at this very instant.

It’s GRAVITY Manbun Avocado. Gravity is the attraction between different masses and keeps salt water, freshwater and everything else on this planet on the ground. Salt just makes water denser than freshwater. Things that are denser sink, while things that are less dense (or buoyant) float. If you very gently pour saltwater into freshwater*, it will sink. Although if you lived on world with an atmosphere of molten lead (which is 10X denser than water), salt water would be buoyant and float away into the sky. It would also be 621F and the water would turn into gas and you would be a liquid, but that’s just a minor technicality. 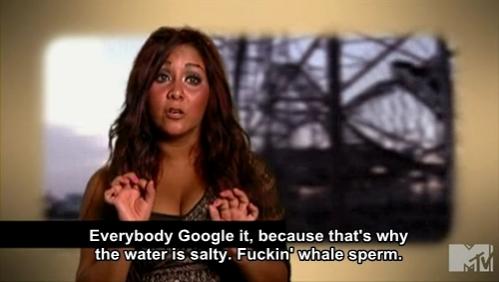 …the water’s all whale sperm. That’s why the ocean’s salty.

First thing: EEEEEWWW. Second thing: GOOGLED IT. This is also the point where I learned a lot about whale ejaculate. THERE ARE THINGS I CAN’T UNSEE. So how much whale sperm DO you need to make the ocean salty?

Unsurprisingly, you can’t google the salinity of whale sperm. But you can google the salinity of human sperm. Since we are all mammals here, I’ll just use human sperm as proxy sperm. Ejaculate is three times as salty as seawater (although it made up of a somewhat different collection of ions). Therefore according to Snooki, one third of the ocean volume is whale sperm. Sperm is also less dense than seawater (due to the lipid content). Therefore according to Bunman Avocado, it would float away into the sky. But I digress.

Popular internet lore states that a blue whale produces over 400 gallons of liquid each time it ejaculates, about enough to fill a hot tub. This is a value that has been debunked, but no one has actually measured blue whale ejaculate volume. So we shall estimate it! Ejaculate volume for various whale species ranges from 2-24 ml (2-16 bar shots). Testes size from 0.1-3.6 kg**. Testes size to ejaculate volume ranges from 0.01-0.6. At most, a blue whale with 45-70 kg testes would only make 27-42 ml of ejaculate (although I agree this sounds really small). That would be a very sorry hot tub…or would it?

Blue whale you have failed us. I summon you Right Whale!! With 1 ton testes it produces gallons of sperm each time it mates. David Attenborough doesn’t lie people. Right whales have been known to live up to 70 years. Assuming right whales try to mate 20 times per year, with 2 gallons per encounter…that’s 2800 gallons a year of ejaculate! Therefore, it would take 1.25 x 1017  hot and bothered whales living 70 years each to make the ocean salty. If that were true, there would be more whales than mosquitos and it would be time to invest in some kind of whale swatter technology. I’m calling your bluff Snooki. 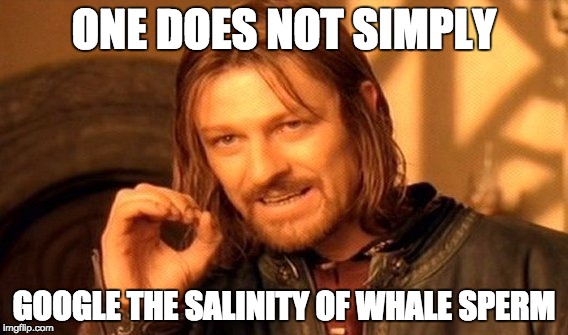 Salt in the ocean comes from rocks on land.

Yes, it’s true. Not from vanquished foes, not from amorous cetaceans and certainly not to prevent spontaneous levitation. ROCKS. Over many, many eons, rain pitter-pattered on rocks, weathering them, dissolving salts and minerals. This ever-so-slightly water eventually flowed into the ocean. Some ions were consumed by sea beasties. Other ions continued to increase in concentration. It was this slow accumulation of ions, in particular sodium and chloride, that eventually became the salty sea water we now of today. It truly is a beautiful geological saga that is better than any story a celebrity could or has ever made up.

A shoutout to Madeline Merck, the owner of the Chuck Norris calendar that inspired this post!

*This assumes that the denser water does not mix with the surrounding water, aka you pour in dense red water into clear fresh water and the two waters merge to form pink water.

**One Orca testicle weighs about the same as a newborn baby.