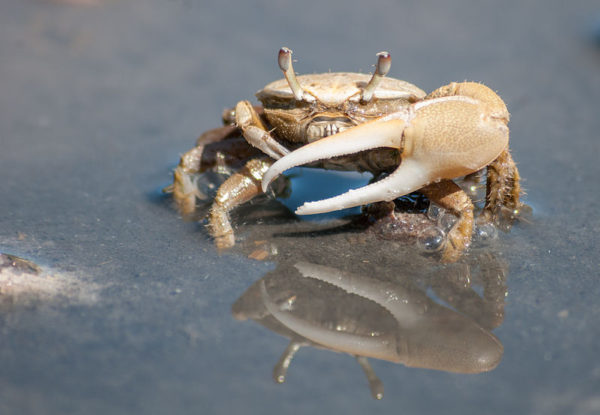 For fiddler crab males, size is everything.  Well over 60 different species of fiddler crabs, genus Uca, exist across the globe.  You are probably familiar with the crabs.  The males have one ridiculously large claw.  You might think I’m being unfair to fiddler crabs, but the claw of male fiddler crabs is one of the most exaggerated, sexually-selected structures of animals.  That ginormous claw can exceed 1/3 of total body size in large males.  For perspective, that is the equivalent of a 200-pound human male having a hand that weighs 66 pounds.  The average weight of human male hand is 1.25 pounds.  So yeah I think ridiculously large is an apt description.

So why gargantuan claws?  To attract the ladies of course.   Male fiddler crab wave their claws about, held high above their head to attract females into breeding burrows. Each species as unique claw wave.  Uca longisignalis, the fiddler crabs right aside my window here at the marine lab in southern Louisiana, stands outs because of numerous small jerks, sometimes reaching more than 30, that occur before the raising of the claw.  Uca musica, a fiddler crab from the tropical Pacific, conducts a prominent circular motion with its claw during a display. In my Louisiana fiddler crab, Uca longisignalis, the circular motion is weak at best, clearly needing some practice.

Why are the claws so important to the fiddler crab ladies?  In part males with larger claws are more likely to win contests, much more a ritual than an actual fight.  To the winner goes the spoils.  In this case the spoils are prime burrows in the mud flat, important both as bunkers during hide tides and nurseries.  Wandering pregnant females actually choose males partly on the basis of the respectability of the burrow.   Of course bigger claws are quite frankly just more visible to females. Interestingly, despite the large claw primarily being just for show, the equivalent biological bling, the claws are still functional and quite capable of generating enough Newtons of force to successfully cut the author’s index finger.

In a great 1996 study by Jennions and Blackwell, males of Uca annulipes were removed from their burrows and released back into the colony.  The two researchers then monitored the fighting success between the residents of the burrows and the released intruders.  Intruders with relatively large claws for their body size won more fights.  However, not just claw size that mattered.  Released intruders initiated encounters more frequently with burrow resident males smaller than themselves.   When the intruder was larger than the residents, the intruder was more likely to win.  The bigger the loser or winner in any fight the longer the battle goes.  Another study by Blackwell and Passmore, found females not only are particular for larger claws but larger males as well.  At the beginning of a mating period, females selectively go for the larger males in the population.  Toward the end of the mating period, when females feel the pressure of mating in time to release young to coincide with the following nocturnal spring tide, they become a little less choosy for big males.

Share the post "My What A Big Claw You Have! All the Better to Love You With."