I have a confession. I am obsessed with ridiculously large and small things. While other children impatiently anticipated toys for Christmas, I enjoyed just as much the miniature Christmas village my mother would place under the tree. I was particularly fascinated with the tiny frozen pond and ice skaters. I eagerly awaited the display being pulled from the box and the opportunity to set up the whole small scene. Years later as an adult, I am still fascinated by that miniature pond and skaters. And I still dream of owning my own tiny Christmas village. Much to wife’s dismay I’m sure, I spend substantial amounts of time drooling over displays of tiny villages in holiday shops. O’ how I must possess my very own miniature gas station or bakery! 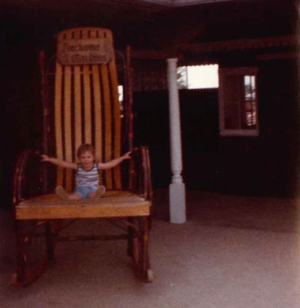 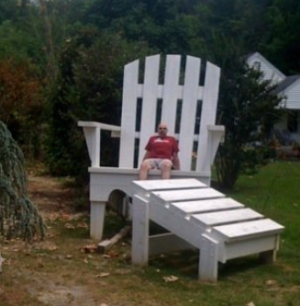 I am not sure when this obsession with both small and large things began. One of the earliest photographs of me is in a giant rocking chair. With a big smile on my face, I am dwarfed by the colossal piece of furniture. Sadly, in researching this post I discovered this rocking chair is not the largest. That title is bestowed to a towering rocking chair, a 56.5 feet tall behemoth in Casey, Illinois, not only the world’s largest rocking chair but also the largest chair in all of America. I will of course need to visit, and photograph, myself next to the massive chair. Another photograph to add to my photo collection of myself with oversized objects. The world’s largest Adirondack chair and me…got it. Largest chest of drawers…done. Largest frying pan…visited. Giant 6-foot tall cheese grater…photographed and almost bought. I could go on and on. 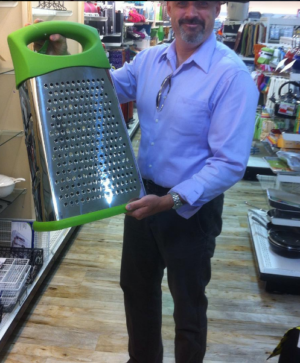 I never realized I could get paid for my obsession. I did not at some point in high school realize or declare I wanted a vocation focused on extreme sizes. Nor was such a trajectory flagged as a possibility on those mandated vocational tests. I got flagged for being perfect for cake decorating. No joke. Nothing about decorating tiny or giant cakes. Of course, who would even think you could make a career out of a passion for size, except maybe Guinness World Records? No, I came by it all by accident.

As an undergraduate, I applied for a summer program to conduct research with a biologist. Knowing at the time I wanted to be a marine biologist, I applied to do summer research counting fish on the coral reefs of St. Croix. An unshockingly, popular choice among undergraduates, I did not get the position. My second and third choices were the only other ocean-based projects in the program. When the scientist involved with my second choice project called to invite me to work with him that summer, I didn’t even remember what the project was. I wasn’t really concerned with the specifics of the other projects because how could I not be selected for my first choice, St. Croix, dream project. Opposed to the beautiful tropical beaches of the Caribbean, my destiny would be to work in a windowless lab all summer in Boston. The project didn’t exceedingly interest me at the time as I wanted to be a field scientist and microscopy in the lab sounded…well dull. But working in an air-conditioned lab in the big city sounded better than living with my parents in rural Arkansas working in the intense Southern heat sweating in a factory. So off to Boston I went. Within a few hours of the first day, I fell in love with the project. So much so I asked that scientist, a preeminent deep-sea biologist and expert on the body size of marine invertebrates, if I could pursue a doctorate with him.

In the biological world, size is more than a novelty. How an organism relates to the world around it is determined by its size, and understanding what influences size is key to understanding the diversity of life itself.  That summer I measured the size of 100’s of tiny snails and when I returned to pursue my Ph.D. I measured thousands more. In total I measured 14,278 deep-sea snails. The largest no bigger than Abraham Lincoln’s head on the face of the penny. The smallest the size of his nose. Those snails I measured were collected from off the coast of New England from depths of over 600 feet to well over 18,000 feet, from the shallows of the New England continental shelf to the abyssal plains.

Why would anyone measure close to 15,000 snails? In the late 1800’s Henry Nottidge Mosely wrote: “Some animals appear to be dwarfed by deep- sea conditions.” By the 1970s, Hjalmar Thiel of Universität Hamburg observed that the deep sea is a “small organism habitat.” Increased depth typically translates into less food in the oceans with the deep-sea being a very food poor environment. As you might expect this has profound effects on the body size of deep-sea animals. Thiel’s seminal 1975 work demonstrated that with increased depth, smaller organisms became more dominant. At depths greater than 4 kilometers on the vast abyssal plains where food is extremely limited, you find some of the most diminutive sizes. In a particularly striking example of this, my doctoral advisor Michael Rex and I calculated those nearly 15,000 deep-sea snails I measured could fit completely inside a single Busycon carica, a fist-sized New England knobbed whelk found along the coast. But by measuring all those snails, Mike and I were able to document exactly how size in these snails changes over a 3.5 mile increase in depth. That study was the first of its kind and remains the largest number of deep-sea animals ever individually measured.

But to say that all creatures of the deep are miniaturized overlooks the complexity of size evolution in the deep sea. Some taxa actually become giants. The Giant Isopod, a roly-poly the size of very large men’s shoe, and sea-spiders the size of dinner plates, quickly dispel the Lilliputian view of the deep sea. Although all those deep-sea snails are smaller than their shallow-water relatives, shockingly Mike and I also found that they actually increase in size with greater depth and presumed lower food availability. To further confound the situation, other scientists have reported the exact opposite pattern in other types of snails, whose size decreases with depth. The same appeared to be true in other taxa, such as crustaceans. How can the deep-sea be both a habitat of dwarfs and giants?

To answer that, I turned from the Earth’s largest habitat to one of its smallest—islands. On islands both giants and dwarfs exist. The diminished kiwi and the enormous Moa of New Zealand, the colossal Komodo dragon on the island of Komodo, the extinct pygmy elephants on the islands of the Mediterranean, the ant-sized frog of the Seychelles, the giant hissing cockroach of Madagascar and the giant tortoise of the Galapagos represent just a few of the multitudes of size extremes on islands. In 1964, J. Bristol Foster of the University of East Africa demonstrated that large mammals became miniaturized over time on islands. Conversely, small mammals tended toward gigantism. This occurs with such frequency that scientists refer to it as “Foster’s rule” or the “Island rule.” Big animals getting small and small animals getting large.

My colleagues and I discovered a similar pattern in 2006 between shallow and deep seas. As shallow-water gastropods evolved into deep-sea dwellers, small species became larger and large species became smaller. Interestingly, size did not shift in a parallel manner. Larger taxa became disproportionately smaller sized—that is, both converged on a size somewhat smaller than medium. I’ve since observed this pattern in radically different taxa, such as bivalves, sharks, and cephalopods.

The fact that islands and the deep sea have so little in common represents a wonderful opportunity that allows elimination of several hypotheses. Of course, what the deep sea lacks is food. The absence of sunlight precludes plants.   Thus, for the majority of organisms living there, the food chain starts with plankton, dead organisms and other organic debris descending from the ocean’s surface. Less than five per cent of the total food available drifts to the sea floor, leading to an extremely food-limited environment. On islands, less food is available because the small land areas support fewer plants at the base of the food chain. 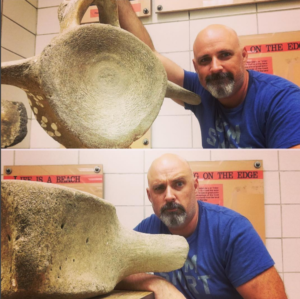 In either case, island and deep-sea animals need to be efficient and creative in their acquisition of food. In both habitats, there may not be enough total food to support populations of giants only. Unable to travel long distances to search for food or to store large fat reserves to fast through periods of food scarcity, smaller organisms are also at a disadvantage. If these contrasting evolutionary pressures were equal, size would be driven to an intermediate. However, the selection against larger sizes is greater, leading toward an evolutionary convergence that is slightly smaller than the intermediate size. Thus, differential responses to food reduction by different- sized organisms may resolve the outstanding paradox of divergent size patterns in the deep. In the interests of reaching this ‘golden medium’, some species become giant while others miniaturized.

In that summer of 1996, as a clueless undergraduate, I started my scientific adventure that fueled my obsession with size. Two decades later, I still am excited by the body size of animals. Much of my research, and the students who work with me, is dedicated to understanding how the expansive variety of sizes on Earth from bacteria to blue whales emerged. Did I mention the great selfie I took recently with a giant whale vertebra the size of coffee table?