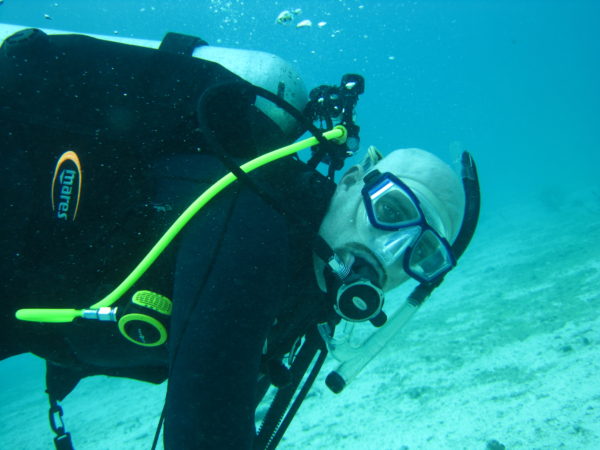 I am annoyingly the first one to return to the surface after any scuba dive.  My bottom time exploring the wonders of the aquatic realm is 60-75% shorter than these friends. I know this specifically because I have kept detailed records in my dive logs.  One of my closest friends, using the same size scuba tank as I, can return to the surface after me and then use the remaining air in his tank to complete an entire second dive.  I hate him.  No but really, it’s very annoying. The difference between him and I? Primarily our size.  At 6’3’’ and 250 lbs., depending on the proximity to the holiday season, I am by most definitions a “big guy”.  My friend is closer to 5’3’’ and weighs of course considerably less.  Tanks of air for scuba diving come in different sizes denote by the holding capacity measured in pressurized cubic feet. Most recreational divers find that an 80 to 100-cubic-foot tank is sufficient for their underwater breathing needs.  My friend dives with a tank in the 70 range.  I cannot match his time with 110-cubic-foot tank.

I am reminded that with great repetition, scientists have found in areas of land and ocean with more oxygen, animals are larger.  In 2001, my Ph.D. advisor Mike Rex and I found that snails in the deep ocean were much larger in parts of the abyss where oxygen was higher.  In one species, one of my favorite deep-sea snails (yes I have a favorite deep-sea snail) Benthomangelia antonia, size doubled across the Atlantic Ocean due to a relatively small increase in oxygen concentration.  A couple of years earlier, the duo of Chapelle and Peck compared 1,853 species of amphipods crustaceans from the poles to equator in both marine and freshwater areas.  They too found when there was more oxygen animals were bigger.  Alligators, fruit flies, domestic chickens, trout, rats, red-bellied turtles, mealworms, and garter snakes, when grown in low oxygen environments obtain smaller sizes.  Even humans living in lower oxygen concentrations at higher elevations, as seen in the high altitude dwelling Peruvians and Tibetans, reach smaller adult sizes.

This pattern of large animals in higher oxygen regions and vice versa also translates across the history of life as well.  Animals were larger during geologic times when oxygen concentrations were greater.  Enter the massive dragonflies of the genus Meganeura that occurred during the Carboniferous, approximately 300 million years ago.  With wingspans of up to 65 centimeters (25.6 inches), Meganeura was one of the larges known flying insects to have lived on Earth.  Their existence and large sizes occurs during a time with atmospheric oxygen was at high.  This high oxygen era led to a lot more than just large dragonflies.  The land and oceans were teeming with giants ranging from arthropods, bryozoans, urchins, brachiopods, and corals. Moreover, the sizes of the largest arthropods, mollusks, and chordates all decline from the Carboniferous to the lower oxygen Permian. 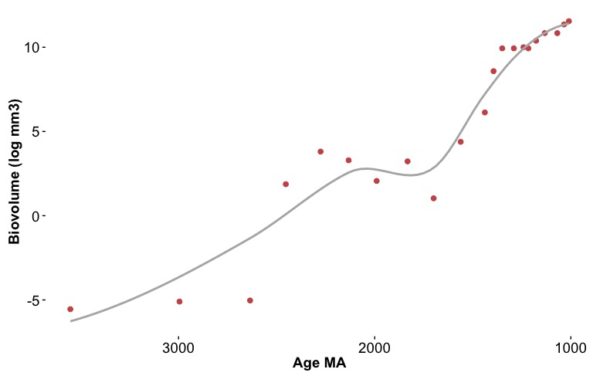 In 2009, my friend and colleague Jon Payne at Stanford university lead a team (myself included) documenting changes in the maximum size of life throughout the history of life (see above plot).  During this 3.5 billion year span, life increased over 16 orders of magnitude in body size.  However, a great majority of this increase occurred in two discrete steps one at 1.9 billion years ago and the second approximately 0.5 billion years.  The steps corresponded with evolution from prokaryotic to eukaryotic cells and from single cell to multicelluar organisms.  Most interestingly, these steps also coincide, or slightly postdate, major increase of oxygen in the atmosphere.  Major shifts in size and the complexity of life appears to have required more oxygen.

But why this pattern?  Simply, cells require oxygen to make cellular energy in the form of ATP.  The more cells that come with bigger body sizes require even larger quantities of oxygen.  But the whole story is more complicated than just this.  Oxygen uptake by an organism is limited by the amount of surface area available for diffusion whether it be the surface area of the gills, lungs, or body surface.  But how much oxygen an organism needs is governed by its mass.  With increasing size, mass increases quicker than surface area, thus demand increases more quickly than supply.  For any given shape there will be a critical size in which oxygen cannot supply demand.  This constraint is exacerbated by low oxygen concentrations.  This is also why gills and lungs have evolved to increase their surface areas through branching, invagination, and folding.

Despite my continued frustration with this whole scuba scenario, I try to remember I am simply the modern day equivalent of the massive dragonflies of the Carboniferous. We are creatures bound by physics and biology.