Editor’s Note:  This is a guest post from Karen James (@kejames on Twitter) is an independent researcher in Bar Harbor, Maine.  Her work is at the intersection of research, education, and outreach to adapt DNA-assisted species identification (DNA barcoding and related techniques) for use in projects involving public participation in scientific research (citizen science). Her aim is to use this combination of approaches to help scale up environmental research, conservation, restoration, and management. 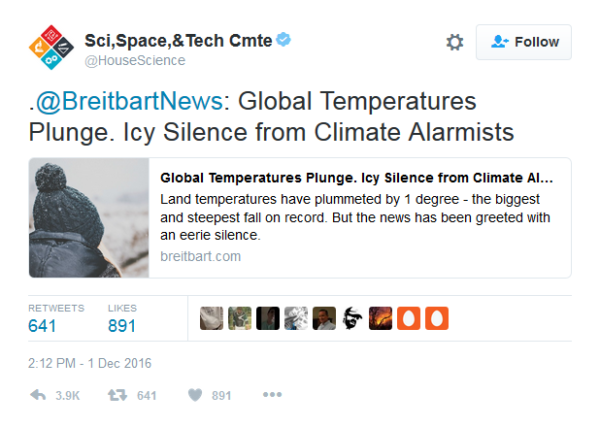 On December 1st, the House of Representatives Committee on Science, Space, and Technology approvingly tweeted a link to a Breitbart piece claiming El Niño, as opposed to climate change, is to blame for the run of record high temperatures observed in 2015/2016.

Their argument appears to be that, because temperatures are now falling as La Niña begins to kick in (and as summer turns to winter in the northern hemisphere where most of the Earth’s land surface is), that we must be settling back into a climate change hiatus (which doesn’t exist – more on this below). They conclude from this that greenhouse gas emissions from human activity don’t cause climate change.

There are many, many problems with this argument. The main one is that greenhouse gas emissions and naturally occurring climate cycles like El Niño aren’t mutually exclusive possible causes of global warming; rather, they can and do interact and co-occur. In other words, to suggest that global warming must be caused either by El Niño OR greenhouse gas emissions is a false dichotomy.

Another problem is that the Breitbart piece cites this Daily Mail piece as its source, which in turn cites a NASA study: “…on its website home page yesterday, Nasa featured a new study which said there was a hiatus in global warming before the recent El Nino, and discussed why this was so.” The Daily Mail didn’t provide a link to the study, so I went to NASA’s website and found the study. Here’s the problem: the study does not say what the Daily Mail says it does. The study provides strong evidence that the observed slowdown in surface warming was not evidence of a “hiatus”; rather, the heat was redistributed in the ocean. Overall, global warming has not slowed or paused. There is no hiatus.

In summary, the United States House of Representatives Committee on Science, Space, and Technology shared and agreed with a piece on Breitbart (a conservative, white supremacist platform to which the chairman of the Committee is a regular contributor, claiming that a recent temperature drop proves climate change is not caused by human activity, citing the Daily Mail (a conservative British tabloid known for its racist, homophobic, and anti-science tendencies) which misreported the results of a NASA study.

If you agree that the Committee should be listening directly to NASA, and not conservative tabloids who dishonestly twist NASA’s science to support their anti-science politics, you can call the Committee at (202) 225-6371. Ask them to retract the tweet, issue an apology, sever its chairman’s connection to Breitbart, and get their information about climate change directly from NASA and other unbiased government agencies. If your Representative is a member of the committee, you can call them too.

One Reply to “An Alarming Tweet From the House of Representatives Committee on Science, Space, and Technology”