“Are you worried about trump deleting climate data?” This was a text I received from a friend last night. My first cynical kneejerk reaction: 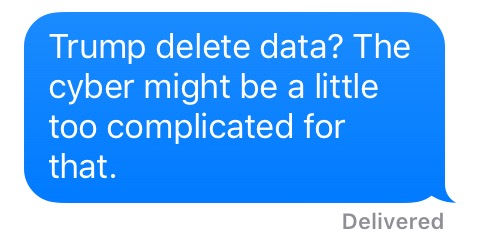 After I got that out of my system, I thought a little bit more. Her question stemmed from a series of articles that have cropped up on the interwebs regarding how some scientists are making duplicate archives of public data because they fear it being deleted by the incoming administration if it doesn’t fit their ideology. For the best answer to my friend’s query, I needed to reframe the questions.

Do I think Trump will physically press the delete key on data?

There are just too many lines of evidence that support the science that the incoming administration disputes. Deleting it all would be to put it mildly, unwieldy. And not only that, it’s not theirs to delete. IT’S YOUR DAMN DATA. Your tax dollars paid for it and you should be able to have access to it. This is the type of data that people and companies use everyday to make this world livable, from planning infrastructure to deciding what coat to wear.

Access to data could be restricted. Which is pretty bad, because climate data has all sorts of applications and quashing it could have repercussions elsewhere. Building that house on a slope with the awesome view? Could be in landslide territory but you don’t know because no data! Even worse, data might still be taken but never analyzed, never interpreted and never communicated to the public in a useful way by imposing limits on what government agencies can say. There’s definitely precedent for this. Government scientists let out a collective sigh of relief once they were allowed to utter the words “climate change” again.

That being said, it’s ALWAYS a good idea to have independent repositories. So I applaud the efforts. If you want to save the data, check out Guerilla Archiving or Climate Mirror. Both are concerted efforts to copy climate data so it remains freely available and accessible. And remember, it’s not only about the data, it’s about communicating that data. As Luanne Thompson from the UW wisely said: “Be a little bit braver” and have those difficult and awkward conversations about the science you care about.