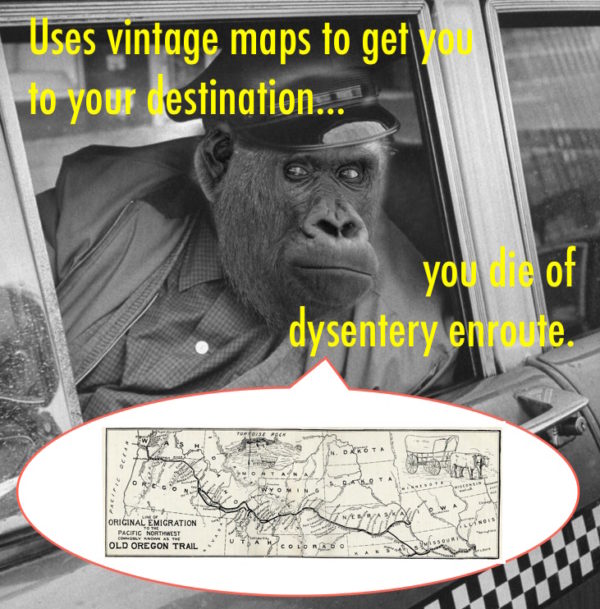 Would you want your taxi driver using a paper road map from 1892? Or would you rather he plug in the route on his Google Map iPhone app?

You just got off a 14-hour flight from Australia, you’re exhausted and sore, and counting down the seconds until you can crawl into the soft comfort of your memory foam mattress. You want to get home as fast as possible, and any further delay is unacceptable.

In this scenario, if your taxi driver pulled out a faded historical road map, you would literally shout at him “Are you fucking kidding me? Is this a joke?”. Old maps list wagon trails, not highways, since the modern interstate system wasn’t built until the 1950s. In another scenario, maybe your taxi driver agrees to use Google Maps, but he turns off the traffic settings and also takes away your own smartphone so you can’t see where you’re going. He might be driving down back roads on purpose, choosing to ramp up the mileage and ramp up his final fare to rake in the cash.

Any of these above scenarios would really suck. They’re not cool. You should DEFINITELY not stand for them. You also shouldn’t stand for the gag order (#EPAgag) and grants freeze (#EPAfreeze) that’s happening this week at the EPA – because the results will be sickeningly similar to the above taxi driver scenario.

NPR reports this morning that peer-reviewed research coming out of the EPA may soon face a case-by-case review before it gets cleared for release into the public domain. This is exactly what corporations do when they fund research – do you think tobacco companies would approve studies confirming that cigarettes cause cancer? Nope, they would bury the science and ensures it never sees the light of day – and that’s exactly what the Trump administration wants to happen at the EPA. Climate change facts? Bury them. Gag the scientists. The difference is that corporations don’t fund the science at the EPA – YOU FUND IT, as a taxpayer and US citizen, and you should have a say in how your tax money is spent:

Scientists at the Environmental Protection Agency who want to publish or present their scientific findings likely will need to have their work reviewed on a “case by case basis” before it can be disseminated, according to a spokesman for the agency’s transition team.

Any review would directly contradict the agency’s current scientific integrity policy, which was published in 2012. It prohibits “all EPA employees, including scientists, managers and other Agency leadership from suppressing, altering, or otherwise impeding the timely release of scientific findings or conclusions.”

The EPA funds a stunning amount of stuff that effects your everyday life – the EPA monitors beach health (so you can swim in a seweage-free ocean!), water quality in lakes and rivers (so you can fish there!), air quality (don’t wanna taste smog on your run, right?), and even programs on Native American reservations to help with initiatives like recycling and sustainability.

If you want to know what the EPA funds in your local area, 1) Click here and enter your ZIP code to find your congressional district, and then 2) Go to the EPA search tool and search for grants awarded to your congressional district (you only have to fill out two boxes – your district number and state). The list of EPA search results will show you exactly what type of projects and how much $$ has been allocated to your town in the past few years.

Finally, CALL YOUR CONGRESSPERSON AND SENATORS to let them know that the #EPAfreeze and #EPAgag is NOT OK! All us scientists at Deep-Sea News are steaming mad, and you should be too. Click here to find contact info for your state senator. And click here and type in your ZIP code for your local congressperson in the House of Representatives. Phone calls are the best way to get in touch – inundate their district and DC offices with phone calls. Phone calls are scary for me as a millennial, but then again so is that dodgy taxi driver who wants to take me home using unpaved wagon trails and historical maps. Make a stand, make your voice heard.

To dig into this issue further, I did my own EPA award search. My congressional district (California 41st) has been awarded $26,369,556 in EPA grants over the last ~15 years. Here’s a screenshot of the awards: 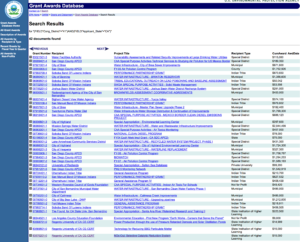 To dig in even further, I started reading about the grants and tweeting short summaries of what the EPA had actually funded in my local area:

One $15k EPA grant funded research to build a device that lowers pollution/exhaust from your lawnmower https://t.co/iVchR80lxn #EPAfreeze

I encourage you to do your own search – what has the EPA funded in YOUR local community?

One Reply to “Fight against the #EPAfreeze – Because you don’t want sewage on your beaches, right?”