I think one reason DSN wanted to rope me in was that Alex wanted another algae nerd on staff. And I hope I make her proud. For you see, it was not always this way. I started my life academic as an invert guy – sea squirts à la dock. It’s taken me some time, but now I’m here, part of Team Algae and slowly trying to earn my cred in the phycological world. But, well, not entirely. Not all algae. I am not as cool as someone like my hero Kathy Anne Miller, algal goddess, who is immersed totally in the weed. You see. There’s one weed for me.

(*to the tune of Oscar the Grouch’s I Love Trash*)
Oh I love kelp!
I love it because it’s kelp!

So why oh why is kelp the badass algae of the sea? There are a lot of reasons (I’m sure I’ll talk about them later), but, I’m going to talk about the one that hits many of us when we first see them in the wild, or even just as a slide on a screen when you’re a wee boy.

Look at the size of that thing.

Why yes, kelp GIFs do exist.

Kelp are the ocean’s charismatic megaflora. Sure, we’re used to hearing about and seeing the giant kelp, Macrocystis pyrifera as kelp’s poster child. It rises up from up from 20m (that’s 60′) up up up to the surface and spreads it’s canopies out. 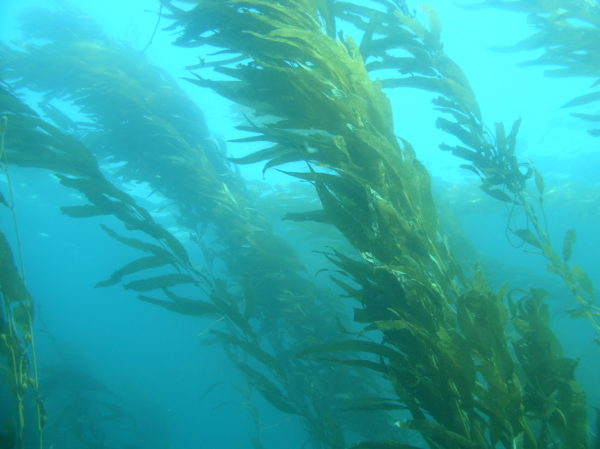 It’s so big, it’s canopy so huge, that you can see it from space (Cavanaugh et al. 2011, and our own Floating Forests). It covers about 1/3 of the range of kelps around the world – a true cosmopolitan – so it’s many people’s first kelp love. 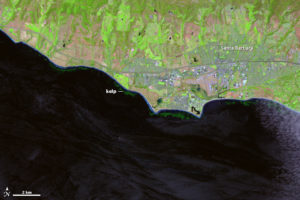 But to focus just in giant kelp is to ignore some of the other giants of the world.

A second runner up in most commonly seen is the Bull kelp, Nereocystis leutkeana (Which really looks more like a giant flail than anything bull-ish, so, why not Flail kelp? Too close to Fail Kelp?). This big beauty – again, vasty depths to surface tall – is a few short base pairs away from Macro (Lane et al. 2006 which really fracked up the kelp taxonomy world), and grows in the wave-swept places giant kelp cannot countenance in the Eastern Pacific. Aside from thumbing it’s nose at high flow, the wind, and waves, its giant hollow stipe makes a badass horn.

Lest you accuse me of being US-centric, consider Ecklonia maxima – Look at this thing. Look at it. It’s a truffula tree. A giant damned truffula tree. Underwater. Case closed for its awesomeness. 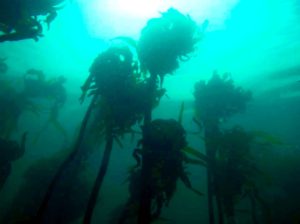 So where is the sea-Lorax? Photo courtesy of T. Wernberg

In Japan, Laminaria longissima does the same, extending long blades from the seafloor up to the waiting hooks of passing kelp harvesters. Big. Fast growing, and delicious. Like the longest lasagna noodles ever, waiting to be slurped up. Get it in your mouth (and see my bio below for a recipe). 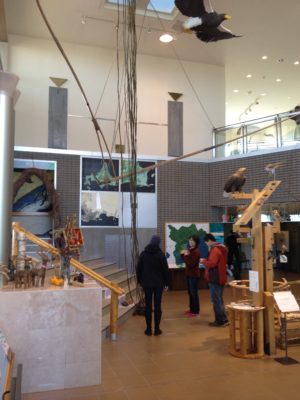 Laminaria longissima in the Kritapu marsh museum kelp harvesting exhibit. You know what was on the menu that night! http://kiritappu.mond.jp/center/

In the Aleutians of Alaska, the long feathers of Eualaria fistulosa – Dragon kelp – reach up to the surface from the vasty depths, aching for sun. This kelp is legen – wait for it – dary… for needing otters to keep it safe from local marauding sea urchins. If you’ve taken an intro bio course that talked about food chains at all, you may not know it, but you’ve heard of this gentle defenseless giant of the sea. 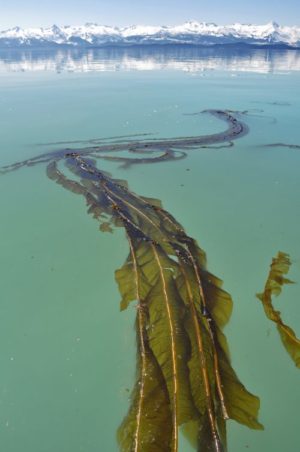 Can you feel the kelpy dragon fire? Photo courtesy of Seaweeds of Alaska

Last, the Giant Elk Kelp – Pelagophycus pora. This is, bar none, my favorite kelp in the whole wide world. It can grow deep – a hundred feet or more down where light begins to fade out. Heck, it’s babies don’t even like light very much (Fejtek et al. 2011). It extends its impossibly long stipe up to a big floating bulb still beneath the waves. And then it unfurls grand long arms with blades that reach up for the sunlight. Swimming among sparse forests of these algal behemoths, one cannot help but feel like a lilliputian come to a temple of old. 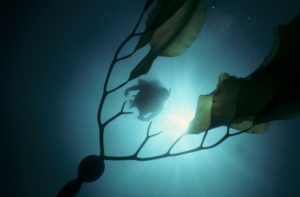 Pelagophycus and diver from the Ron McPeek collection at UCSB that I *really* have to blog about at some point.

So, yeah. Charistmatic megaflora. How can you not love them and want to cuddle up with them at night?

And will Craig count them among his Ocean Giants?