This is a guest post form Maarten De Brauwer, a PhD candidate at Curtin University. You can find more of amazing work from Maarten on his social media sites, listed at the end of the article! 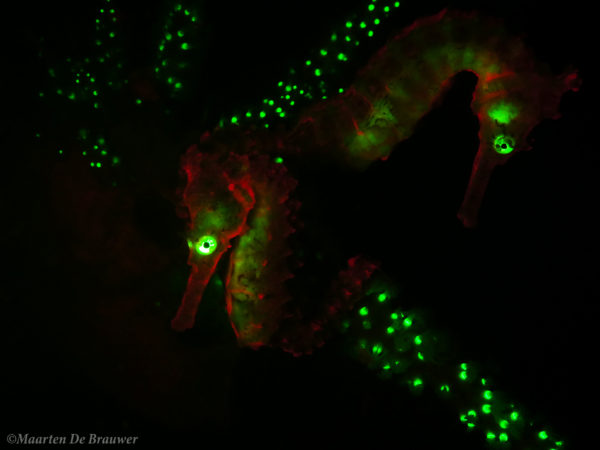 It isn’t the first time DSN gets it’s underwater rave on, whether we are showing you the fluorescent corals of coral reefs, Red Sea underwater disco, or fluo raving diving on the Great Barrier Reef, we’ve always been keen to show you how to have a great time underwater and look stylish (or at least bright) while doing so. A returning theme besides how awesome it looks, is why? Why would there be an entire world of dazzling colours underwater that us puny humans can only see by using specials tools? While I don’t pretend to know the answers, I might offer a few suggestions that could make you look at it in a different light…either that or confuse you even more while showing pictures of pretty glowing fish. 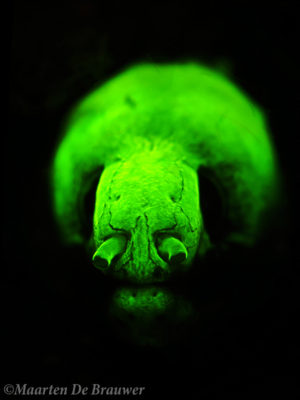 As a short recap, biofluorescence is not the same as bioluminescence. In the latter, fish produce their own light, the former (which this blog is about) reflects colours from an external light source at a different wavelength. You can find the technical details here. While diving, we can only observe biofluorescence using a few aids: a blue dive torch to stimulate fluorescence and a yellow filter in front of the mask to block the excess blue light and only see the reflected colours. Originally the blue torches used were UV-lights, but increasingly we are finding that normal, high intensity blue light actually works better. It also has the added benefit that it doesn’t make you go blind if you stare at it for too long.

So there we are, blue light in hand, yellow filter on, ready to marvel at all things fluo. The question remains why? Looking at what happens on land might give a few clues, because biofluorescence is not limited to the ocean. Birds, scorpions, butterflies, flowers, etc. all show biofluorescence. It has been suggested to play a role in attracting pollinators, mates, or even detecting light levels. One of the few functions that has been proven, is that it is used as a sexual signal in parrots.

Now that we’ve ended up at sex, it’s time to get back in the ocean.

Could this Hairy frogfish (Antennarius striatus) use its fluorescent lure to attract fishy prey? Notice how the lure resembles the worm in (c).

Of course, all these explanations depend on whether or not fish can actually see fluorescence, which is still an important point of discussion. The fact that many species that are fluorescent also possess yellow filters in their eyes similar to what we use for diving hints at the fact that they might. But simultaneously, the low light levels found in the ocean might be too weak to stimulate the reaction. So alternatively, marine biofluorescence could just be a quirky side-effect of evolution that serves no real purpose. Even if that would be the case, we can still marvel at just how beautiful the hidden quirks of the ocean can be.

Want more from Maarten ? Check him out online!

4 Replies to “Reef raving revisited: 4 good reasons for fish to glow in the dark”