Today’s guest post is by Natasha Phillips, a marine biologist and PhD researcher based at Queen’s University Belfast, interested in the movement ecology, diet and energetics of ocean sunfishes (Twitter: @SunfishResearch, Blog: sunfishresearch.wordpress.com)

If I asked you to picture a predator, weighing over 2 tonnes1 and capable of travelling the distance of a marathon every day2, what would it look like? Would you imagine sleek shapes, immense power or maybe terrifying teeth? What if it could also dive >840m deep3, swarm in huge numbers4 and produce over 300 million offspring5? Such a creature sounds like the stuff of nightmares, spawning thousands of B movies where people fear to tread water… introducing the ocean sunfish! 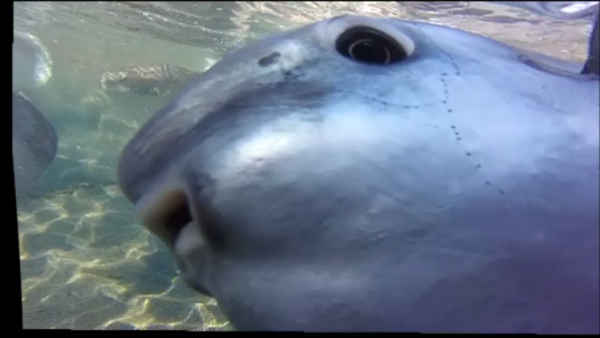 Curiouser and curiouser. Image from my fieldwork season

These crazy-looking creatures have hit the headlines again and for good reason… just look at it. The bizarre shape, the enormous size, the permanently surprised expression; sunfish are simply swimming clickbait! Firstly in 2015 Boston Man broke the internet with his idea of catching a ‘baby whale’ (*spoiler, it’s a sunfish) and now a hilarious rant about the “biggest joke played on earth” has gone viral, again with sunfish as the butt (or should that be swimming head?) of the joke. But what is it about these oceanic oddballs that inspires such outbursts?

Well, even someone who studies sunfish for a living like me has to admit they are pretty weird, both to look at and in their habits, but that is precisely why I find them so fascinating. So what do we really know about this strange species? Alongside the jokes, Scout Burns’ comic rant made some pretty fishy claims about sunfish and the scientists who study them, so I feel it’s time for someone to stand up for the funny-looking fish and bite back.

Dishes to fishes and the meaning of life

One of my favourite suggestions from Scout’s blog is that sunfish are “big dumb idiot[s]” made when “God must have accidentally dropped [one] while washing dishes day and shrugged his shoulders” because they have “no purpose… every foot… wasted space”.. Well sometimes the truth is stranger than fiction; the fishes first evolved around 500 million years ago6 and despite their somewhat prehistoric appearance, the ocean sunfishes actually represent the new kids on the block (evolutionary speaking)! They appeared ‘only’ 50 million years ago, descended from pufferfish that left for a life in the open ocean7. Their strange shape actually represents cutting-edge evolutionary design, honed by selective pressures over millions of year to a life wandering the world’s oceans. As to their purpose, well this is a bigger question… the meaning of life has been debated for centuries from ancient philosophers to Monty Python (of course the answer is: 42). But roughly speaking, their “purpose” is the same as that of all life… simply to exist: to feed, grow, breathe, reproduce and die. Of course, having an interest in biology, we want to know a few more details than that! Which is why scientists (myself included) are trying to unravel the ecology of the sunfish a little further… 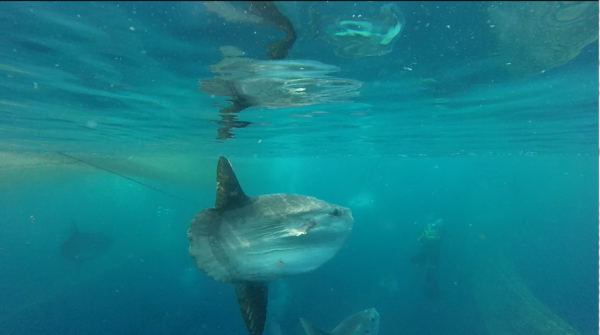 Why swim when you could fly?

Scout suggests “scientists even debate how [sunfish] move. They have little control… some say they must just push water out of their mouths for direction…They could use their back fin, except… it doesn’t f****** grow. It just continually folds in on itself.” The image of a giant sunfish blowing water like a kid blows bubbles is a great one! But sadly this simply isn’t the case, we know how they move and in quite a lot of detail. Rather than swim with a strong tail fin (like most sharks and tuna species), the ocean sunfish flaps its dorsal and anal fins like a penguins flippers8 to efficiently (if a little ungainly), fly through the water. The funny stumpy tail (or clavus) actually has a vital role to steer the fish, like a ship’s rudder (and for the record it grows like any other body part).

Scout quite rightly mentions that sunfish don’t have swim bladders; however it is not true that “that every fish has [one] to make sure it doesn’t just sink”. In fact, although it might sound strange, many fish don’t have swim bladders, including great white sharks, manta rays and white marlin. There are other ways to provide lift without the issues of containing air internally (which can cause problems with rapid changes in depth). Most fish without swim bladders, including sunfish, have large deposits of fatty lipids in their livers that provide buoyancy, so no swim bladder, no problem9.

Unfortunately it’s also not the case that sunfish “get stuck on top of the water… because without the whole swim bladder thing… the ocean pushes over the [fish]”. This idea sounds super funny as sunfish are often seen bobbing around at the surface, but unfortunately is untrue. Sunfish don’t actually need a swim bladder to remain upright (it’s not a life jacket); they are perfectly capable of swimming upright both at the surface and at depth. They “bask” at the sea surface10, which is a clever behaviour to increase their heat exchange, to communicate with birds for cleaning services and perhaps simply just to rest, before diving back into the depths. 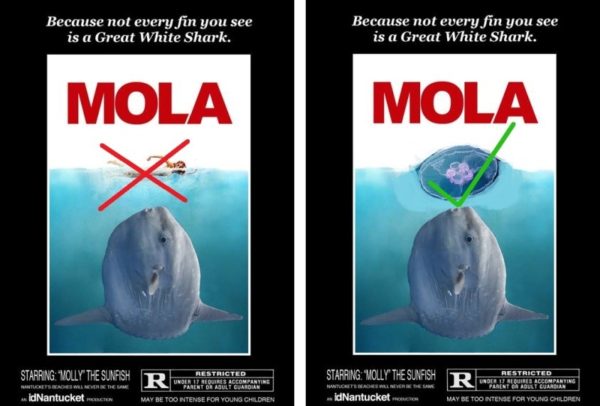 Of course being a huge fish, there is a certain amount of Hollywood pressure to be a tremendous toothy terror and Scout’s article sounded distinctly disappointed that despite being “so huge” sunfish are not even “decent predators”. Unless you are a prey item of course! The biological definition of a predator is ‘an animal that naturally preys on others’ and so sunfish are oceanic predators. But of course this particular predator poses little threat to people, unless you are unfortunate enough to stand under a breaching sunfish, in which case you may find yourself transformed into a pancake-ified version of a human being. But as a biologist, this doesn’t seem like the best method for classifying predators (although it might win you a Darwin Award).

Back to sunfish as predators, (an area a lot of researchers are working on), Scout says “They mostly only eat jellyfish because [it has] a possibility of drifting into their mouths I guess. Everything they do eat has almost zero nutritional value and because it’s so stupidly fucking big, it has to eat a ton of the almost no nutritional value stuff to stay alive. Dumb.” Well, that’s the funny thing really –they really can survive on a crazy diet! Small sunfish (<1 m), eat a wider range of things than their larger cousins, with 40% of their diet made up of seafloor creatures including crustaceans, molluscs and even some fish species11. When they come across gelatinous prey (siphonophores, pyrosomes, jellyfish etc.) the sunfish are surprisingly fussy and are careful to only eat the most calorific parts (no dieting here!) which means gonads… yum. Anything that requires more energy to find or digest than it provides -like jellyfish bell tissue- is rejected. By remaining fussy eaters within their ecological niche (where unsurprisingly, there is less competition), sunfish are able to survive where few others can, something biologists (myself included) are still trying to understand and explain. 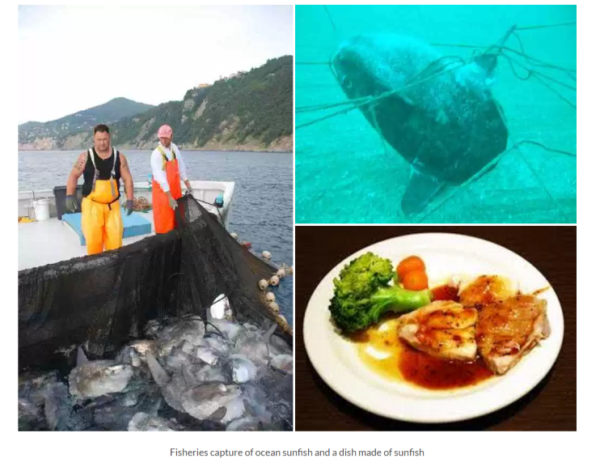 Moving on from thinking of sunfish prey to sunfish as prey, and it’s hard to imagine this giant floating head being vulnerable to attack. However, sunfish start life in the plankton as tiny eggs <1 mm5. This puts them on the menu for almost every creature in the sea! As they grow, the number of predators able to cope with such an item decreases, but they have been found inside sharks12 (not a pretty sight) and there is plenty of evidence of attacks by orca13 and sealions (although these might aggressive play behaviours, like a cat tormenting a mouse). The main threat to ocean sunfish, the super predator that kills 100,000’s each year is… you’ve guessed it: us. There are markets for sunfish meat across the Far East (Taiwan and Japan in particular14) and they are captured as unwanted bycatch by fisheries globally15. It is these enormous catch figures that have led to the ocean sunfish being classified as Vulnerable to extinction by the IUCN Red List. 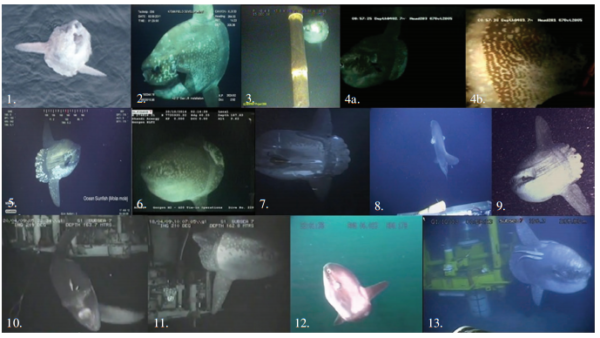 Sunfish images from across the world. Phillips et al., 2015

However the future for this funny fish is becoming brighter; as more people become aware of the oceans weird and wonderful creatures, from funny rants and viral videos, more pressure is placed on governing bodies to reduce bycatch, combat climate change and alter unsustainable exploitation of the seas. Perhaps ranting and raving about strange species can be helpful for conservation, simply by raising awareness and creating a catalyst for change.

3 Replies to “Trolling in the deep: from raging rants to support of the strange”