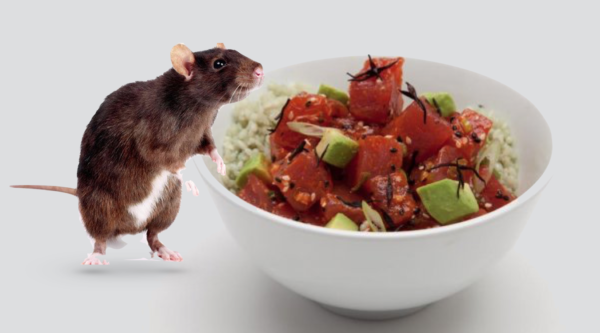 One of my favorite urban myths is that at any point in time you are never more than six feet away from a rat.  Turns out that the reality is more like 164 feet away, but that’s just splitting rat hairs.  The point stands that where you find people, you find a lot of rats.  I’d like to suggest that perhaps the new urban metric should be, “You are never more than 4 city blocks from tuna poke.”  As I’m beginning to discover, where you find people, you are (increasingly) finding poke.

Allow me to explain by indulging me in a little experiment.

If you have Yelp or a similar restaurant-finding app, fire it up and do a search for “tuna poke” from your current location.  Go ahead… I’ll wait.

For the benefit of poke noobs, poke (pronounced POH-kay) is a traditional raw fish salad that is an important part of Hawaiian cuisine.  While various seafood can be used to prepare poke, by far the most common and most popular preparation uses tuna, primarily yellowtail or big-eye tuna.  While poke has been eaten for millennia by Polynesians, it was Hawaii chef Sam Choy (the “Godfather of Poke”) who really put the dish on the map for a global audience.  So much so that Business Insider claimed in early 2016 that, “poke will be the next big thing in fast food.”

Fast forward to April 2017.  So how did your local tuna poke search go?  Allow me to share the results of my search from my home in Oakland, California: 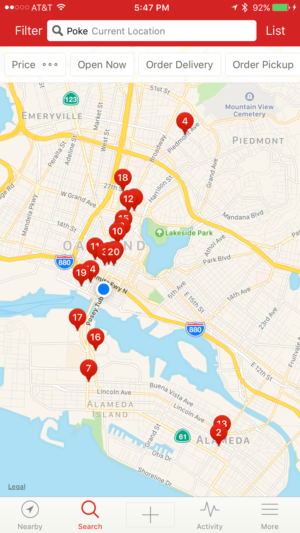 Yelp apparently limits smartphone map results to a maximum of 20 locations per search presumably to avoid over-cluttering the screen.  But according to Yelp, I have at least 12 locations within easy walking distance where I can find tuna poke.  Some are mom&pop poke operations like “Poke Koma,” while others are mega-poke chains like “Poke Zone” (a wholly-owned subsidiary of “Poke Salad USA,” or “Ono Grill.”  Still others are sushi restaurants or sushi fast food retailers that advertize poke.  Maybe it’s just me, but I was amazed by how many poke retailers had seemingly appeared out of nowhere.  Granted, I live in the SF Bay Area, a proud foodie haven, but this poke bonanza was most definitely NOT the case just a year ago.  Tuna poke has really taken off.

Wondering if poke was booming across in San Francisco, I performed a few Yelp searches to check for patterns.  Here’s what I found: 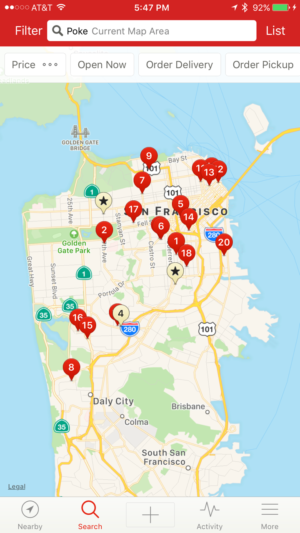 Again, the map search is limited to 20 results across the visible map area.  But tuna poke retailers can be found across the city, with a plethora of choices not surprisingly being concentrated in the downtown/financial and tourist-heavy neighborhoods.  But what if I drill down closer into a neighborhood?  Zooming in on The Castro, for instance, I can find another set of poke retailers who did not appear in the initial, broader scale search.

According to Yelp, I can find 17 retailers who carry tuna poke in The Castro alone.  Who knew there was so much fish eating happening in The Castro?

So let’s assume that the deeper, more selective geographical area you search for “tuna poke” on Yelp will return more unique options for procuring your poke.  But what does poke availability look like across the mainland US?  Here are my results… 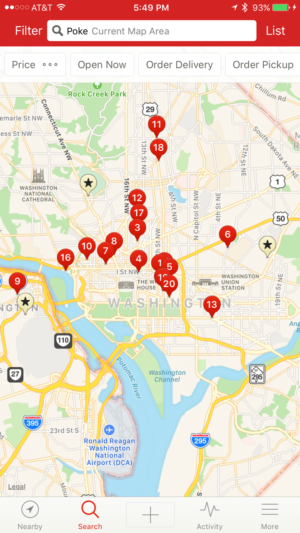 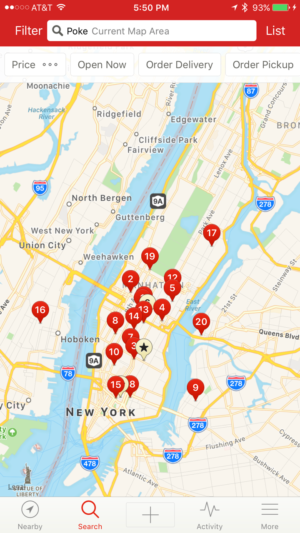 With a drill down on south of 34th Street:

And from Tribeca to the Financial District: 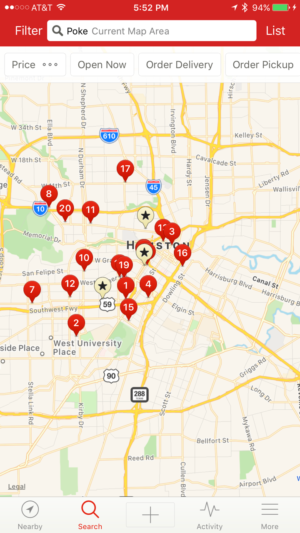 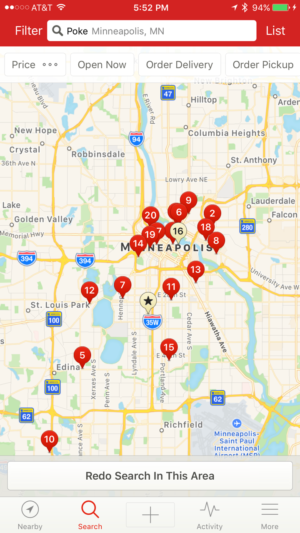 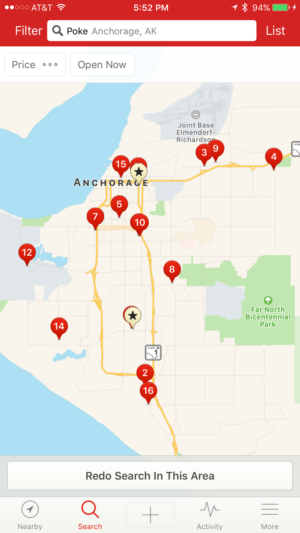 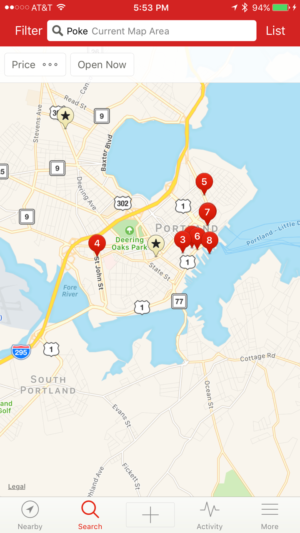 And yes, even Fargo, North Dakota has poke according to Yelp: 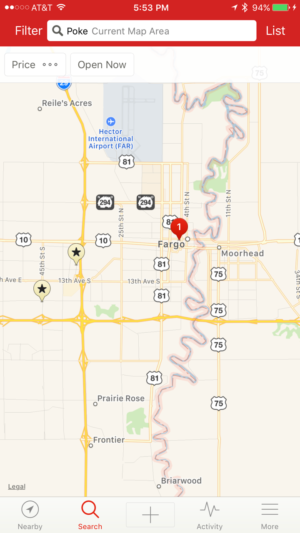 Which raises an important point.  These are results of what Yelp reports as to the availability of tuna poke based on their users who have reviewed restaurants, posted photos, or restaurants who have advertised on their app that the menu includes tuna poke.  I would imagine that North Dakota readers may know of some great tuna poke spots in Fargo.  So take all of these results with a dose of context.

But it does indicate to me that tuna poke has gone from a specialty dish that required a holiday in Hawaii to enjoy to something that has been mainstreamed across the mainland.  This represents A LOT of tuna consumption.

But here’s the thing.  The Hawaii tuna poke brand identity that Chef Roy Choy and others have successfully built is one that conjures impressions of the freshest catch of the day (remember, you are eating raw fish) that is being harvested in Hawaii and shared with Aloha around the world.  When you eat poke, it’s supposed to evoke an image and a connection to Hawaii.

And this is where I smell a rat.
Take a peek at a Yelp search for tuna poke in Honolulu, Hawaii: 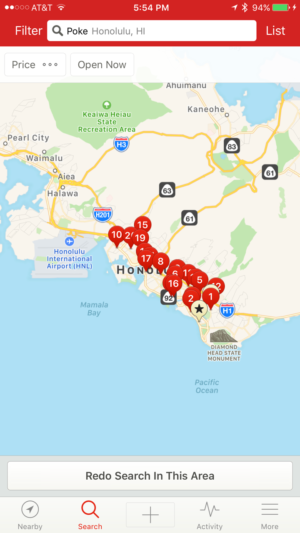 Again, the search is limited to 20 retailers, but not surprisingly Honolulu streets are lined with poke vendors from downtown to Diamond Head.  This is as one might expect at ground zero for tuna poke.

But in the motherland of poke, mass consumers of this dish (and by that I mean visitors and residents who eat poke regularly from high-volume retailers such as Safeway, Foodland, KTA Super Stores, and also numerous food courts that dot Waikiki as well as across the main islands) are NOT eating fresh-caught fish.  Volume tuna poke sellers are not buying their fish from small scale, sustainable, local fishermen (called pono fishermen) who fished that day but from the Honolulu Fish Auction Block.  The mass-market poke retailers are sourcing deep-frozen tuna (often treated with carbon monoxide gas in order to retain color) that were caught perhaps months ago by tuna longline fishermen, often from the waters of Micronesia or the Marshall Islands.

Very little of the premier quality tuna landed in Honolulu makes it’s way to Hawaii restaurants or poke retailers, but is destined for restaurants in Japan and other Asian markets where they fetch handsome prices.

So if the bulk of Hawaii poke eaten is sourced from long-ago frozen, carbon-monoxide color-stabilized tuna that was caught on longlining vessels, what do you suppose mainland tuna poke vendors are selling?

Make no mistake… I love poke.  It’s delicious, simple, satisfying in a way that is hard to describe, and I do truly feel (as much as a white dude can without sounding culturally appropriative) a connection to a Polynesian tradition.   Why I find the proliferation of mass-market tuna poke so alarming is that it’s coming at a steep series of costs to the ocean as well as to sustainable local fishermen.  First, there’s the reality that longline fishing, where miles of mainline are deployed with thousands of baited hook sets, is the absolute antithesis of sustainable, pono fishing.  The tally of bycatch and discards from tuna longline fishing is staggering, and it means that you carve a very deep impact on long-term ocean health with each serving of tuna poke that is sourced in this manner.

Secondly, in embracing mass-produced tuna poke we miss the fact that truly sustainable tuna poke is indeed possible.  Each of the Hawaiian Islands has communities and networks of local pono fishermen who use handlines and practice traditional methods to bring their catch to market.  Contrast this with the Hawaii commercial tuna longline industry that uses mostly foreign workers who work for slave wages and who cannot even step off their ships.  Of course pono fishing cannot supply mass global demands.  But that, in essence, is what makes this type of fishing pono (or correct/righteous/sustainable) in the first place.  Perhaps some food is simply not suited for globalization.

Finally, this explosion in tuna poke further stokes the mythology that our oceans are an inexhaustible source of food, irrespective of the fishing effort or methods.  This isn’t conjecture… this is free market reality.  If there is demand for a resource, there will always be a group seeking to exploit it.  Case in point, the Western Pacific Regional Fisheries Management Council (WESPAC) is now urging President Donald Trump to remove fishing prohibitions within the Pacific marine monuments created by Presidents George W Bush and Barack Obama and re-establish the councils’ supervision of the fisheries.  Why would a quota-based fishery that meets it’s federally determined quota every year be trying to open fishing once again in fully-protected marine reserves?  Simply put, it’s greed.  But it’s greed that is fueled by consumer demand, and cheap/affordable tuna is a big part of that.

Perhaps tuna poke will, like the cronut, fade away once the next food trend appears.  Or perhaps we will hit peak poke before that.  My crystal ball is hard to read.  Tuna has the dinstinction of being incredibly ono (Hawaiian for “delicious”).  That’s a good thing.  Now, if we can just try harder to also make sure it’s pono.

2 Replies to “Peak Poke? (Or, Our Choices Have Consequences)”