The title may be a bit harsh but without a doubt the deep sea remains one of the least explored environments on Earth.  The earliest interest and sampling in the deep sea occurred in the late 1800’s; however, a majority of deep-sea exploration did not occur until after the 1960’s.  And although the current amount of sampling and exploration of this great environment is without precedent, much of the deep sea remains unexplored. How much of the deep sea you ask? This is indeed a tough question to answer. To derive an exact answer, we would need to know of every single sample of every deep-sea expedition taken plus all the submersible and ROV dives and how much area they covered. Of course this is extremely unreasonable but I find myself with some free time and interest so an exercise in estimation…

Total Number of ROVS and Submersibles 20

Total Number of Dives Per Day 1

0.0017% is actually a ridiculously high estimate. The assumption that all the ROV’s/submersibles dive every day is unreasonably stupid and does not take into account downtime for travel to sampling sites or maintenance. Likewise, although the total number of ROV’s/submersibles is near the current total estimate not all of these have been in operation since 1975, although the Alvin was commissioned in 1964. I also feel that the total distance covered per dive is high, especially when dives visit specific features such as hydrothermal vents or methane seeps. Perhaps more importantly, the assumption that each of the above samples/dives were taken in a unique location is unlikely has ROV’s/submersibles dives frequently return to specific sites. In addition, the trawl distance, average trawl opening, total number of trawls and cores, and field of few for the benthic landers are stupidly high estimates as well.  So the answer is much less than 1/1000 percent of the total deep sea.

New work by Taylor and Roterman attacks this same question, how unexplored is the deep sea, from another angle.  The two scientists collected all known scientific papers studying the genes of populations of deep-sea invertebrates.  The total number of papers they found? Just 77 on a mere 115 species.   Nearly half of these studies focused on that Atlantic Ocean and most focused on larger and commercially important, e.g. orange roughy, species.  Only 9 of the 77 papers studies animals from depths greater than 3,500 meters which account for nearly 50% of the Earth’s surface.

Webb and colleagues approach the question by examining all the records of deep-sea animals in Ocean Biogeographic Information System (OBIS).  OBIS is the scientific communities attempt at a stockpile of all the location data ever collected for any marine species.  Of course not all data finds its way into OBIS but it remains our best attempt at the effort.   Webb and colleagues findings echo that of Taylor and Roterman and my own, the deep ocean is poorly explored.  In one example from the study, >50% of the OBIS records come from the continental shelf, which constitutes <10% of the ocean, whereas <10% of records are from the Abyssal Plain (4000—6000m), which constitutes c. 50% of the ocean area. 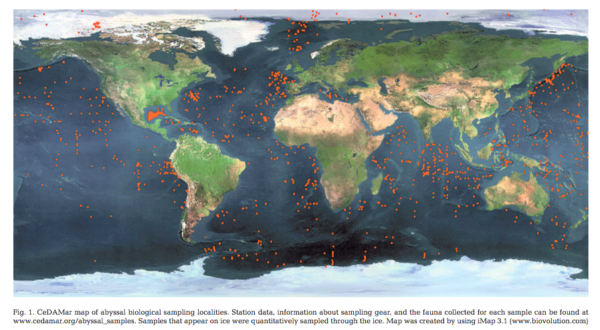 Stuart et al. compile all known abyssal samples (>4000m) and also find a glaring problem.  In total, there are only about 1600 documented samples which sounds like a massive amount.  But these account for a minute proportion, 1.4 × 10– 9 percent of the abyssal sea floor. The uneven distribution of sites reflects mainly the proximity. Vast areas particularly in the Central Pacific and Southern Ocean remain virtually unknown and most sampling is concentrated in proximity to long-established American (WHOI) and European (Southampton) oceanographic institutions.

We know more than ever about the deep oceans. However with the amount unexplored, innumerable new species, new biology, new habitats, and new discoveries await.