Last week, we wrote a teaser on what would happen in the sea during the eclipse. But now the results are in and YES! CALAMITY ENSUED.

On August 21 2017, the moon passed in front of the sun, the sky darkened, the temperatures dropped, and the zooplankton thought it was night. This triggered their daily migratory response and they headed to the surface of the sea. And data from oceanographic buoys off the Oregon Coast recorded all the drama! Leave it to marine scientists to so conveniently deploy OOI, a permanent, highly instrumented, cabled oceanographic observatory, directly in the path of the eclipse. 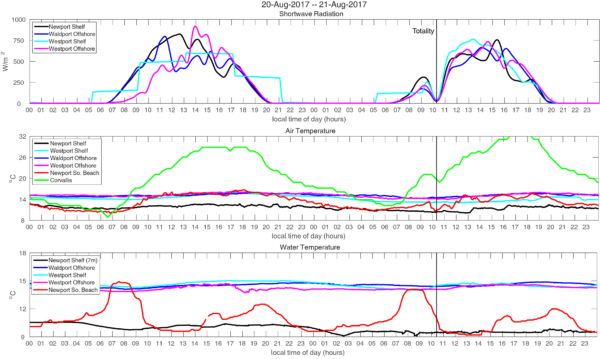 Thank you meteorological station for giving up the atmospheric deets during the eclipse. Solar radiation dropped. Air temperature dropped. Water temperature did nothing because heat capacity is a bitch. 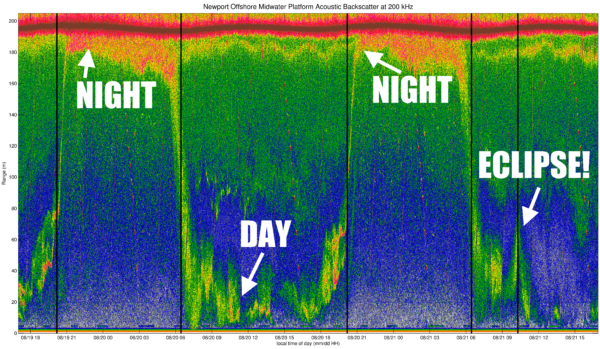 By day zooplankton go sink. By night they rise. By eclipse, they make an attempt to get out of their bed, rise halfway to the surface, assess the situation, then hit snooze.

In sonar imagery, zooplankton are easily identified as the bright reflecting bands. When the eclipse happened, you can see that band start to rise, just like it does every dusk. Of course an eclipse isn’t night. Within an hour the zooplankton mob realized they had made a terrible, terrible mistake and descended again.

Kudos to Jonathan Fram at Oregon State University for setting up the sonar to watch this awesome migratory spectacle. Was it truly an oceanographic calamity? Only if you were one of the thousands stuck in traffic after the eclipse.

One Reply to “What actually happened in the sea during the solar eclipse!”