And when I say Dragons, I am talking about the Dragon Kelp (Eularia fistulosa), of course! 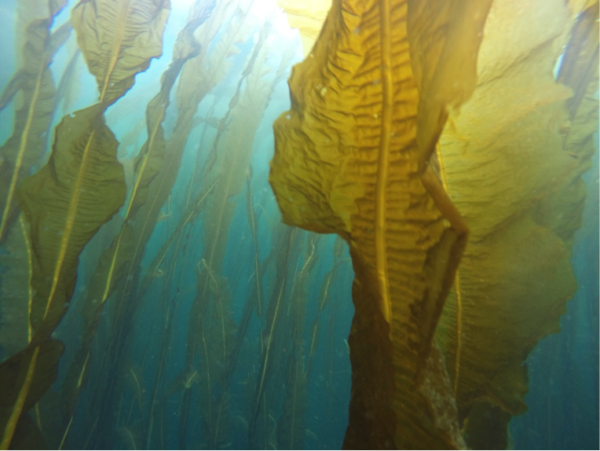 This summer, I was lucky to catch a number of tweets by Genoa Sullaway (@genoa_sully), a student in Matt Edwards lab, on a research trip up in the Aleutian Islands. The images she posted were arresting – particularly for a kelper like me, so I asked her if she could throw some together in a picture post of Aleutian kelp forests. Below is what she sent me, and it’s a voyage I hope you’re as excited about as I am! Enjoy! -JEKB

It all started with the sea otters, beginning in the 1980’s, sea otters throughout the Aleutian Islands began to disappear. It is hypothesized that orcas (aka killer whales) depleted their populations because they were hungry; international whaling in the North Pacific had taken away a lot of the food they normally eat (Estes et al. 1998). When the otters started to decrease, the populations of their favorite food, sea urchins, began to explode. This shift in the food chain, what ecologists know as a trophic cascade, resulted in large scale changes to the underwater landscape of the Aleutians. Sea urchin numbers became so great that they began to essentially ‘lawn mow’ the surrounding kelp forests and associated algae, leaving behind urchin barren grounds (areas devoid of most seaweeds) that contain extremely dense populations of sea urchins (hundreds per square meter). Over the course of five to ten years, sea urchins consumed thousands of kilometers of kelp forests across the archipelago. The goal of our research is to understand how this immense loss of kelp across the archipelago affects the species and communities that depend on kelp to live. This work is funded by the National Science Foundation and is a collaborative effort between scientists at San Diego State University, University of Alaska Fairbanks, and Kunsan University, South Korea. 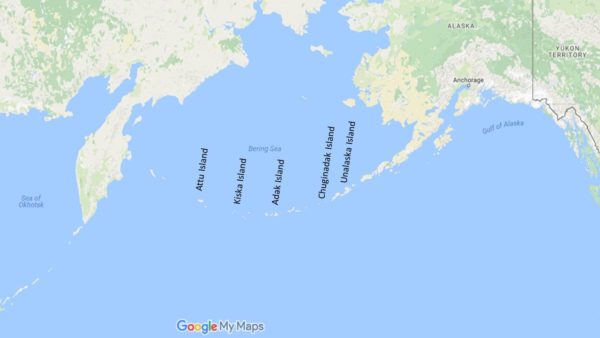 Over the course of two research cruises, we sampled 14 representative islands across the chain (seven in 2016, seven in 2017). This year we started in Adak Island, and headed west to Attu to sample the Western Islands. Last year, we started on Adak and set course for Dutch Harbor to focus on sampling the Islands in the East half of the chain. 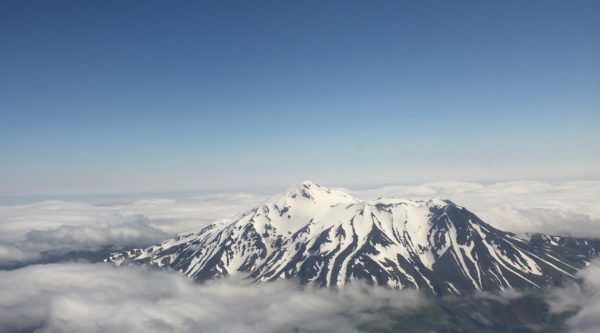 How ’bout that ride in? Volcanic Mt. Moffett peaks through the clouds as our plane lands in 40mph winds on Adak Island. This is where we met up with the R/V Oceanus (R/V = Research Vessel), to begin the research cruise. Photo: Genoa Sullaway, San Diego State University 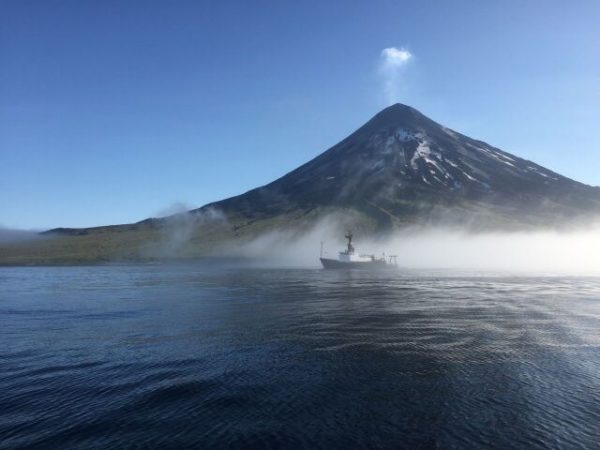 Chuginadak, Say that five times fast! Our floating home, the R/V Oceanus is 175ft long and holds 11 scientists and 12 crew members. Here, she is anchored in the Bay of Four Mountains (i.e., we were surrounded by FOUR glorious volcanoes) at Chuginadak Island in front of a very active volcano. Photo: Genoa Sullaway, San Diego State University 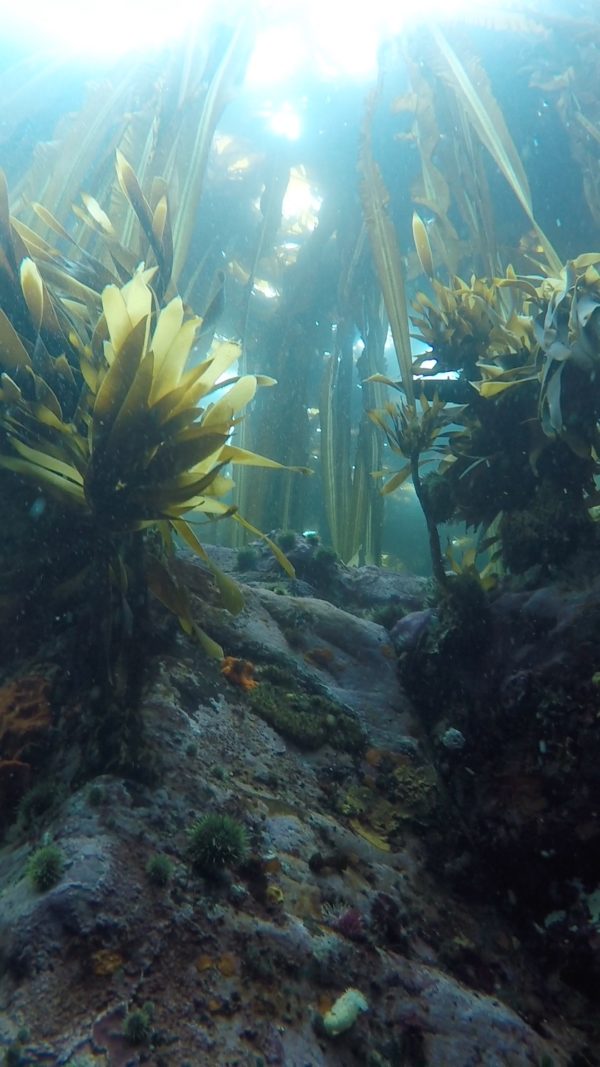 An Aleutian Kelp Forest in all its glory. Dragon kelp, Eularia fistulosa, is the dominant canopy forming species across the Aleutian archipelago. These algae are considered ‘ecosystem engineers,’ because they provide habitat and structure that supports a diverse array of marine life. Dragon kelp, along with associated algae, oxygenate the water via photosynthesis, and provide the base of the food chain for hundreds of species ranging from mammals such as sea otters and stellar sea lions, to invertebrates such as sea stars and sponges. Fun Fact: The clumps of blades at the base of each kelp are reproductive kelp blades, or sporophylls, and when they move back and forth in the ocean currents they knock encroaching urchins off the rocks, acting as a built-in urchin defense! Photo: Genoa Sullaway, San Diego State University 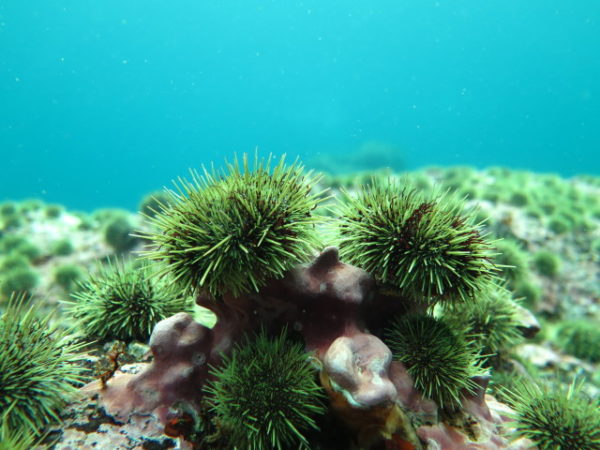 Urchin barrens look strikingly different from the darker dense kelp forests. The pink ‘encrusting’ algae that the urchins are on coats the rocks and provides some habitat for small invertebrates, but the habitat is mostly dominated by sea urchins, often there will be hundreds of sea urchins within one square meter! Photo: Sarah Traiger, University of Alaska Fairbanks 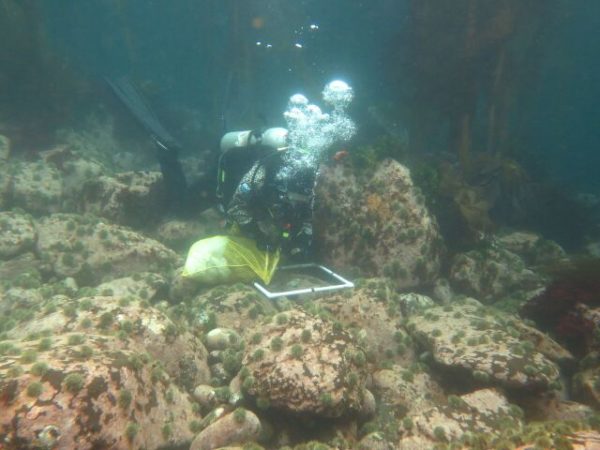 Does nearshore biodiversity differ between kelp forests and urchin barrens? To answer this question, divers surveyed the organisms living in urchin barrens and kelp forests. Surveys are done by collecting all organisms within a quadrat (our fancy PVC pipe squares used to standardize sampling area) and bringing them back to the R/V Oceanus so they can be counted and weighted. After a full day of diving we would often be up until the wee hours of the morning sorting and weighing! Photo: Sarah Traiger, University of Alaska Fairbanks 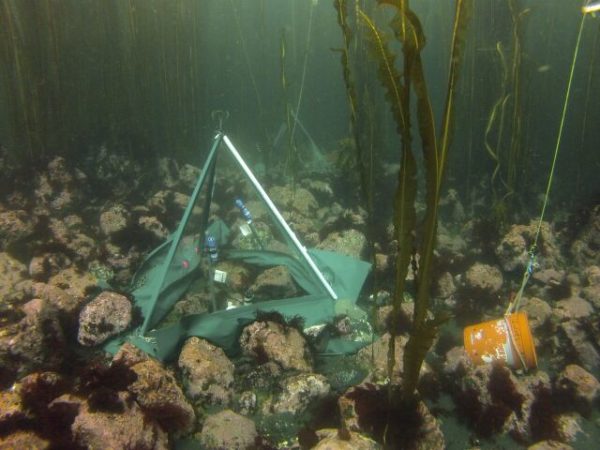 Does nearshore primary production (how much oxygen is produced by a habitat) differ between kelp forests and urchin barrens? To answer this question, we used underwater tents to estimate how much oxygen is being produced in these different underwater habitats. Here, a tent is deployed in a ‘transition zone’, a habitat where urchins have begun to mow down kelp, especially the dense understory kelp, but some dragon kelp remains, thus it is not quite an urchin barren. These tents are left for 24 hours underwater. Inside a tent, sensors recording oxygen, temperature, and light record data that will help us estimate and compare photosynthesis among habitats! Photo: Scott Gabara, San Diego State University 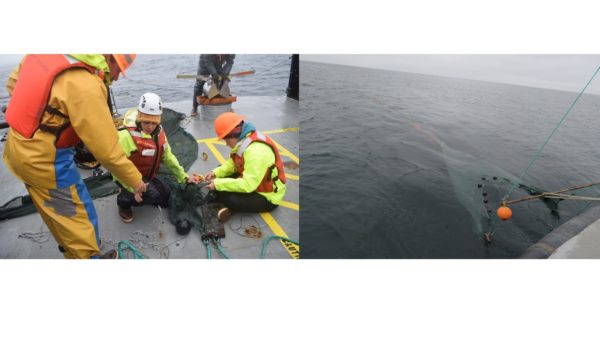 How does offshore biodiversity differ across the Aleutian archipelago? Do nearshore kelp forests support life in the deeper ocean? To answer this, we used trawl net surveys to sample the communities at around 90m offshore of the islands we visited. Rocks are a trawl nets worst enemy, unfortunately on our cruise we managed to bend three trawl bars and accidentally hauled up a 400lb lava rock…Oops! Nevertheless, we got the data. Photo: left-Tristin Mchugh, San Diego State University, right- Melissa Goode, Alaska SeaGrant. 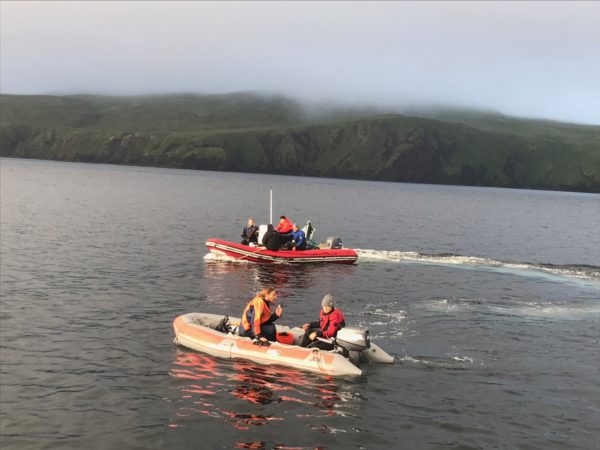 San Diego State Dive team prepares for a day out on the Bering Sea! Boats are craned over the side of the R/V Oceanus to get them in the water and then loaded up with divers and dive gear! Photo: Ju-Hyoung Kim, Kunsan University 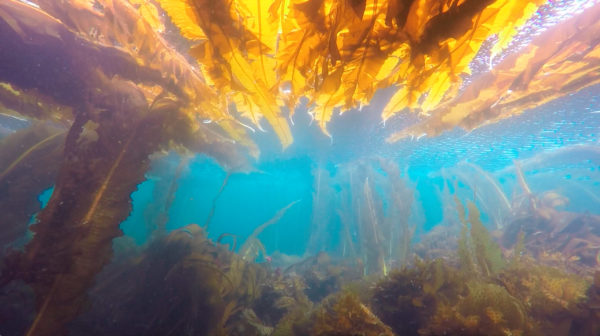 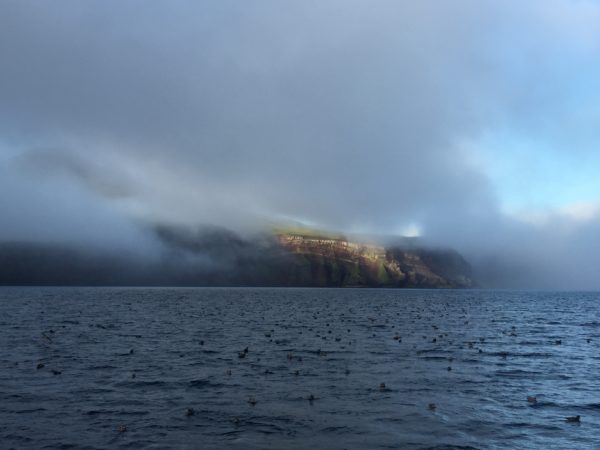 After three weeks of clouds, the sun decided to show off and highlight the unique geology of Yunaska Island! Photo: Genoa Sullaway, San Diego State University 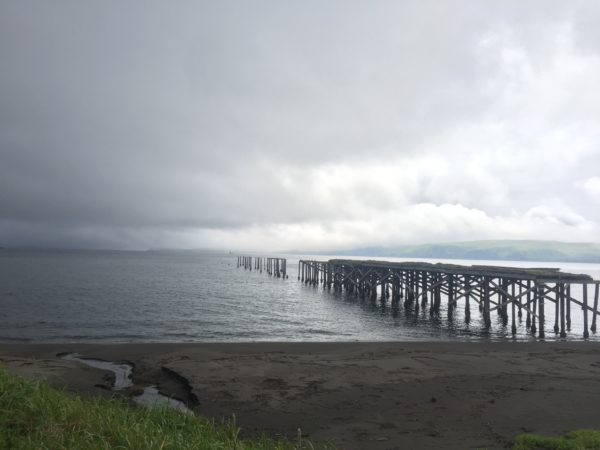 Kiska Island is reminiscent of human activity and war; adjacent to our boat is a pier that was constructed during WWII, but has since been abandoned, shipwrecks and a Japanese submarine have sunk into the beaches. Our dive sites were littered with ammunition shells. Here the Battle of the Aleutians was fought in 1943 and unexploded landmines are still buried among the island’s rolling green hills. We got a few hours to explore the beaches and looked for washed up treasure, and by treasure, I mean buoys and shells. Photo: Scott Gabara, San Diego State University 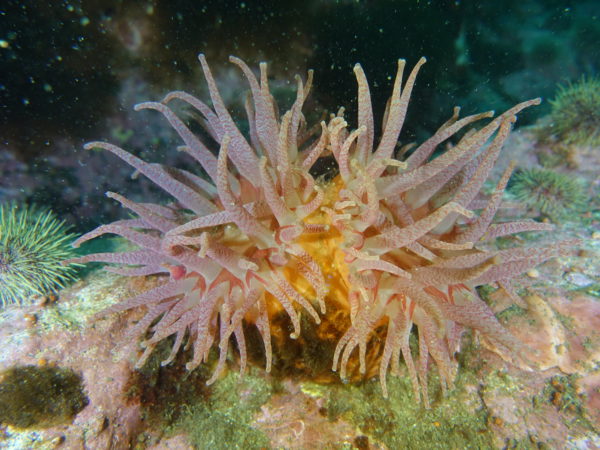 The topside weather was often cloudy and grey, but when the winds are not blowing, the calm seas bring out the bright colors of the subtidal world. Here, two anemones that appear to be fused together show off their bright colors! Photo: Melissa Goode, Alaska SeaGrant. 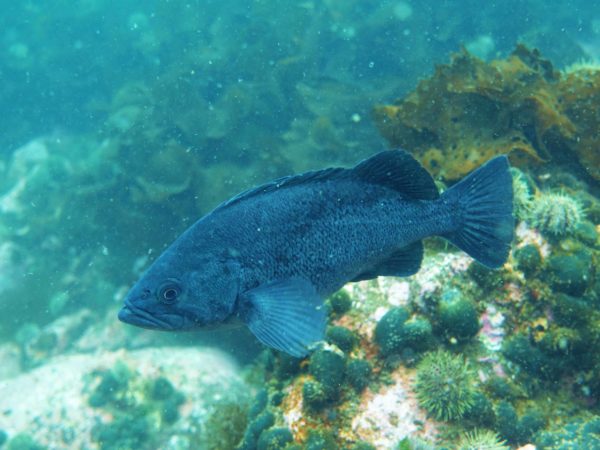 A black rockfish, unfazed by the loud, bubbling object swimming towards it (a SCUBA diver, trying to get the perfect shot) lazily swims through an urchin barren. Photo: Melissa Goode, Alaska SeaGrant.