Skip to content
Where do you find the most Narwhals on the Earth. Why Narwhals?

Well it could be any species. Anglerfish, carnivorous sponge, giraffe, or even a montane unicorn.

BUT I WANT TO WRITE ABOUT THE NARWHAL! NOBODY CAN STOP ME!

So Narwhals. You probably already know that Narwhals inhabit the Arctic Ocean. But it’s not like if you went to the Arctic there would be back to back Narwhals. There is no big Narwhal carpet you could just walk across carefully avoiding all those tusks. Even in the magical Arctic, there are places where Narwhals are dense and places where Narwhals are rare. But can we make a prediction? The geographic range of an organism, that area of earth in which an organism dwells, is defined by the maximum and minimum extent of latitude, longitude, and depth or altitude a species lives. Think of a giant ellipse defined by these geographic limits. Those boundaries can be set by any number things—temperature, precipitation, food availability, length of daylight, land or water boundaries like rivers, oceans, mountains, or even a continent if it’s a marine organism. These aspects of the environment interact with the needs and tolerances of the organism. Boundaries can even be set by other organisms who outcompete for space or resources.

Let’s assume that once a species gets closer and closer to this geographic limit it is getting closer and closer to some aspect of the environment that is intolerable for them. For our Narwhal, too far South the temperature is uncomfortably warm. This happens with each of its boundaries on the north, south, east, and west sides. But the center of that geographic range is prime position. Everything is just right. The perfect balance. A Goldilocks scenario. At this place the Narwhal flourishes and the number of that Narwhals is spectacular. This is the Abundant Center Hypothesis. A species is most abundant at the middle of its range. And in the case of our Narwhal, we should find the most of that horned, blubbery beauty right smacked dab in the center of its geographic range. 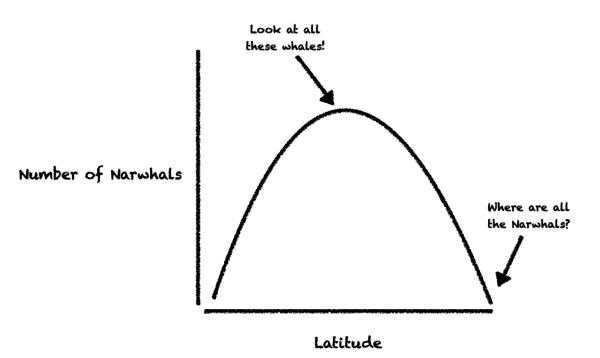 Graphically, you can think of the Abundant Center Hypothesis as normally distributed bell curve (see above). Pick one of those geographic or environmental axes like temperature or latitude and at the center is peak density or abundance for that organism.

But how well does this actually work in the wild among all animals and plants? 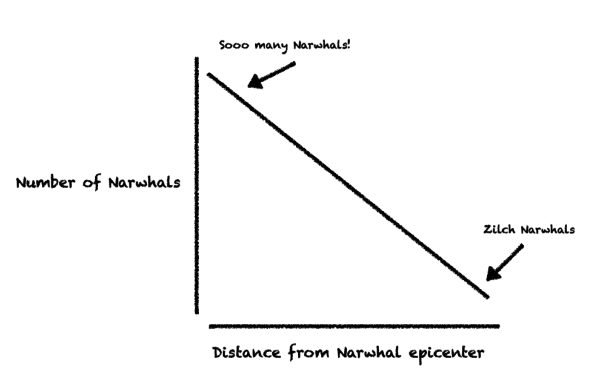 New work by Tad Dallas, Robin Decker, and Alan Hastings at the University of California, Davis sheds some new light on this almost 40-year old question. They recast the Abundant Center Hypothesis into a new testable relationship, if a species is most abundant at their range center, then a negative correlation should exist between abundance and distance from the center—a distance-abundance relationship (above illustration). Overall, the group of scientists examined this relationship for 1,109 birds, 63 fish, 81 mammals, and 166 trees in the Americans.

So what of the Abundant-Center Hypothesis? Alas, it may be time for the trash bin.
Recovering the predicted relationship for only 9.5% of the organisms tested isn’t exactly impressive. One glimmer of hope remains. The study by Dallas, Decker, and Hasting was for land dwellers. For my beloved Narwhal and other denizens of the sea, they may still be most bountiful at the centermost.

One Reply to “Where Do the Most Narwhals Live?”