Jellyfish begin their lives as stationary polyps, then metamorphose into one or more small jellyfish. These results are part of a paper my advisor and I just published in PLOS ONE. Photos by me.

As a scientist, I love jellyfish, and I suffer for it. Up until a few years ago, I had no way of knowing exactly where or when the jellyfish I study would appear. So I traveled to Washington and France and Florida looking for them, and more often than not, came up empty handed. The most frustrating part of all this travel was that I had all the species I needed right at home, but couldn’t use them. That’s because jellyfish, like butterflies, are the last stage in a complicated life cycle. Jellyfish have a stage that’s analogous to a caterpillar, termed a ‘polyp’, which lives happily in the lab. So imagine studying butterflies, and having all the caterpillar you need, expect none of them will metamorphose. No matter how hard you try to convince them, they just sit there eating leaves, and so you travel all around the world to find and study the actual butterflies. That is the exact position researchers and aquarists have been in with jellyfish.

This is why I’m so excited to share with you a paper I just published in PLOS ONE on a simple method for triggering metamorphosis in a huge variety of jellyfish species. Now, rather than traveling halfway around the globe, scientists can add a couple drops of a special compound to their polyp tank, and have jellyfish to study in under a week! I hope this work will be helpful to many different kinds of jelly-lovers, form biologists to aquarists and beyond.

This research started out of frustration. I’d been traveling for over two years looking for the best species to study, and was consistently coming up short. I wanted to better understand the process of metamorphosis, called ‘strobilation’, but I needed to find a species that would easily strobilate in captivity. No luck. And so one day, rather than going out to look for jellies,  I decided it was time to spend a couple months indoors, to test out a hair-brained idea that was all together different.

Throughout the decades, a handful of scientist have recorded that this-or-that chemical, when added to water with this-or-that polyps species, will trigger strobilation. Most of these papers stretch back to the 70’s and earlier, and most have been largely forgotten. But I decided it was time to revisit those old studies, and test out different chemicals. The experiments were messy and quirky–I had a bunch of chemicals, jars, and polyps all soaking in different substances for different lengths of time–but I remember the exact moment when I got my first breakthrough.

I carried a small dish of polyps, which had been soaking in a type of chemical called an ‘indole’, to the microscope. I was working alone in the lab, and I was feeling pretty discouraged. It’d been two weeks of stirring up different chemical solutions, doling them out in precise proportions, and checking every single day for signs that the little polyps had begun metamorphosis. Nothing. But when I looked down at the polyps soaking in indoles…well, I think my lab notebook can express it better than I can (there was, um…some language): 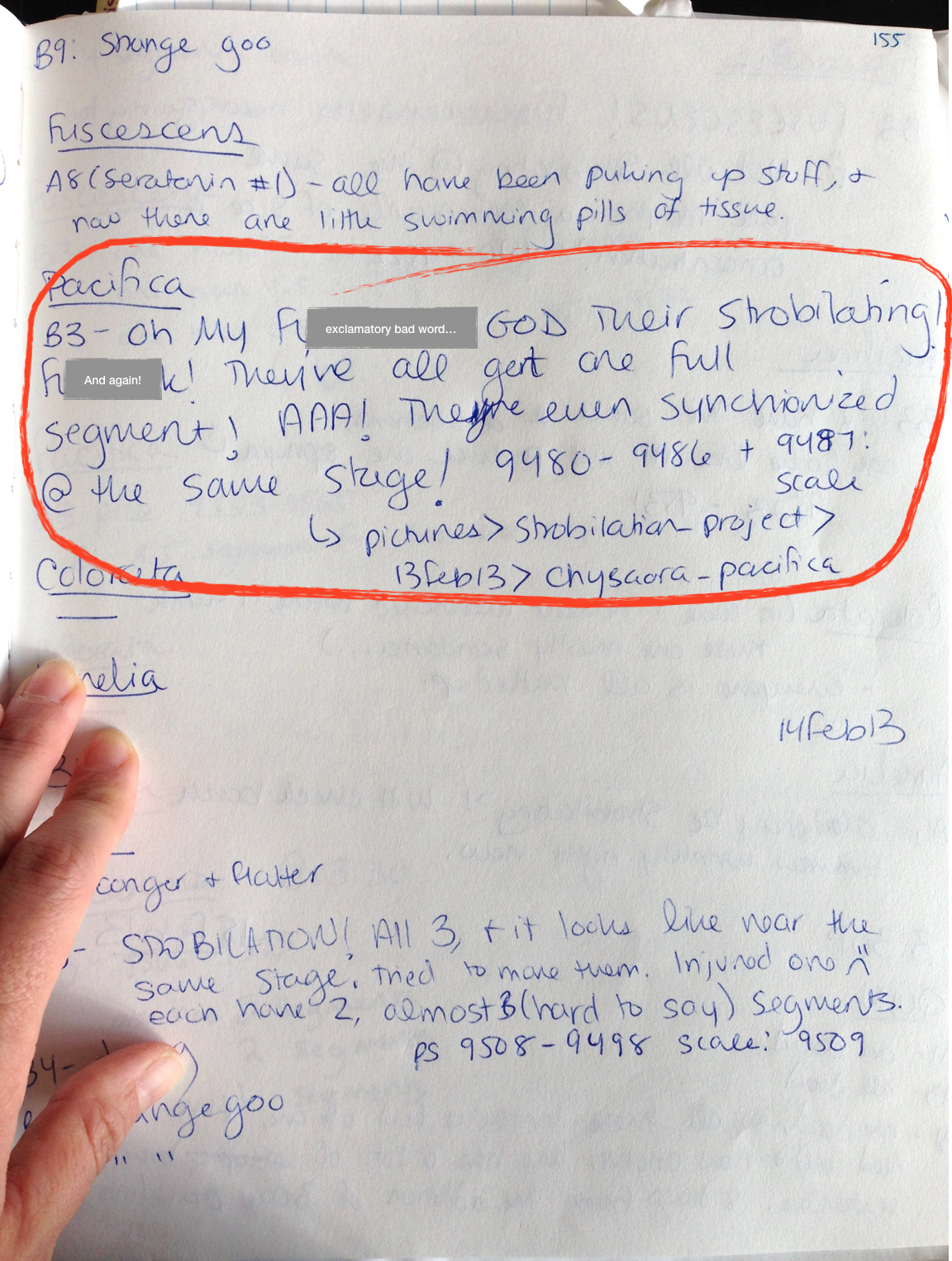 the actual page from my lab notebook…

Each polyp had formed a small ring below the tentacles. This ring was the first sign of metamorphosis. Each ring would eventually grow to be a tiny jellyfish (the pictures at the top of this post are the same animals I saw that day!) This species is the Pacific sea nettle, but the same compound also worked for species from the Atlantic and Indian oceans. Almost every species I tried would dutifully metamorphose into a tiny jellyfish.

Not only did this open up a whole new research avenue for me, it has become the foundation for my career. Now we can have tiny jellyfish of almost any species in under a week. Even box jellies!

But here’s a result that’s got me head scratching: one type of polyp, from a crown jellyfish, didn’t strobilate with the indoles. I tried all sorts of different combinations of conditions, nothing worked. But there are a couple really cool things about crown jellies that may explain why they didn’t respond. First, the polyp lives in a small tube, unlike any other species. So it’s possible the compound didn’t work because the polyp is mostly tucked away behind a barrier. But the second cool thing about this species is that it’s a very distant cousin of most of the species that I studied. So it is possible that over evolutionary time it evolved a slightly different biochemistry, which makes it insensitive to indoles. Similar to the way catnip gets cats high, but doesn’t have the same impact on people. Indoles works well on many related species of jellies, but not so well on a distant relative. 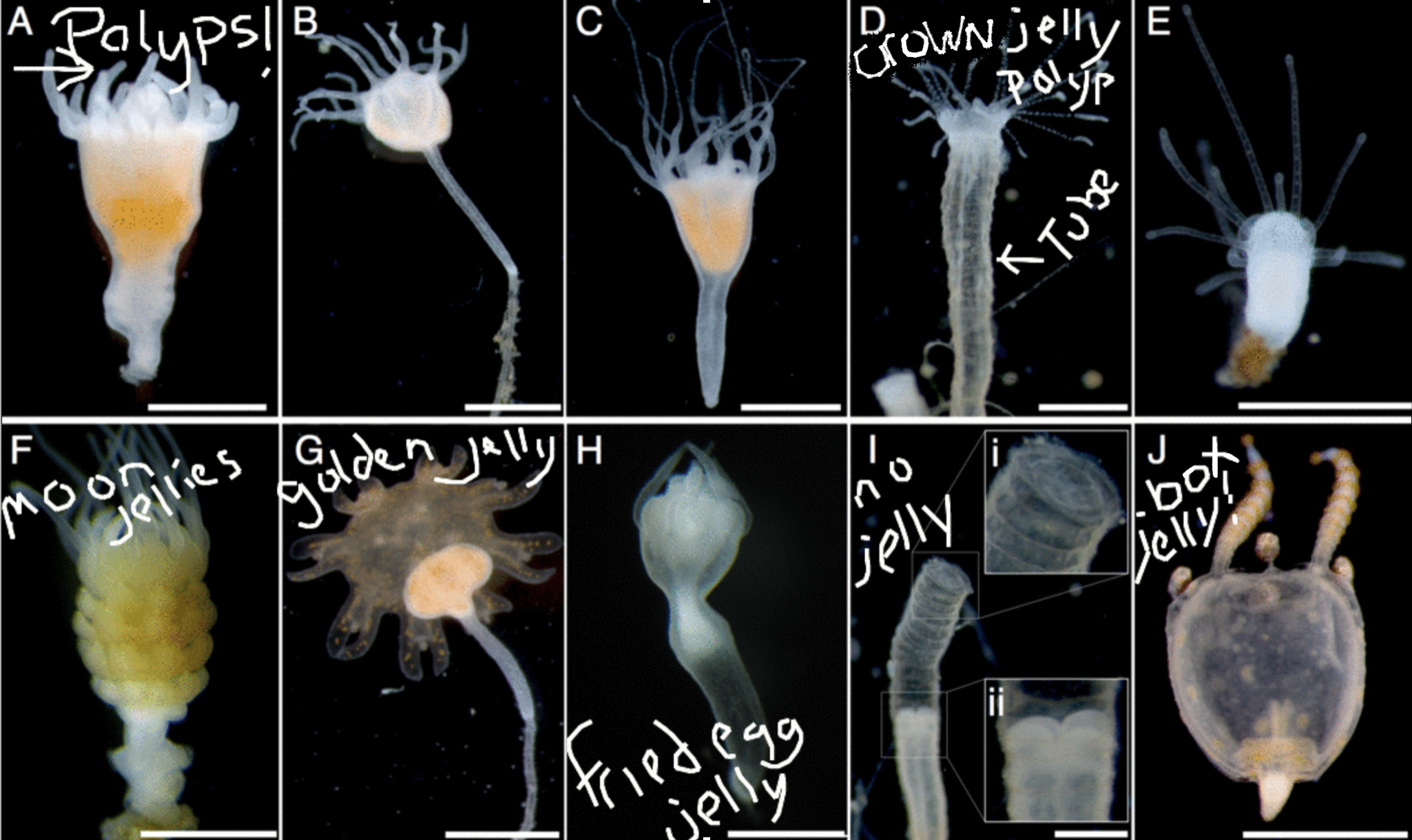 a *slightly* different version of Figure 3 from the paper

I’m now working on figuring out the reason why indoles works so well for some species. What genes might this compound help turn on and off? By studying metamorphosis in jellyfish, I hope to better understand how metamorphosis evolved over long time scales. For example, are there genetic similarities of metamorphosis between frogs, butterflies, and jellies?

Those results are still pending. For now, I’m enjoying all the new jellies we have growing in the lab. And I hope these results can be helpful to all those seeking to learn more about jellyfish in this coming new year!