It’s summertime and you’re sweating from the heat and humidity. You jump in the pool and feel a rush of relief as you suddenly feel cooler. The water might not be colder than the air, but it sure feels like it, and it does a great job of relieving you from the heat. We’re all familiar with this, but did you know it may also explain why whales are so big?

Almost 4 years ago, I began my PhD studies at Stanford University. I was interested in how changes in the environment impact biodiversity through time. I first decided to tackle the question of how transitions from land to water impact body size. Mammals are a well-studied group of animals, and they’ve made this transition multiple independent times. There’s also lots of data on their body size, of species in the modern and the fossil record, so they seemed like a great place to start to answer this question. The original goal was just to test whether aquatic mammals are bigger than we expect by chance, but I was really surprised by what we discovered about the drivers of their evolution.

After hitting the books, I was shocked that I was able to develop a simple mathematical model that explained the minimum, maximum, and average sizes that we were seeing in aquatic mammals. The minimum constraint in the model shows that these mammals need to produce more energy in their bodies and lose less of that energy, relatively speaking, to the water, to have any energy left over for reproduction and growth. Otters are the one exception to this trend: we’re thinking that this is because they only spend part of their lives in the water or are more efficient at conserving their body heat with their thick fur, although we haven’t been able to test either of those hypotheses yet. 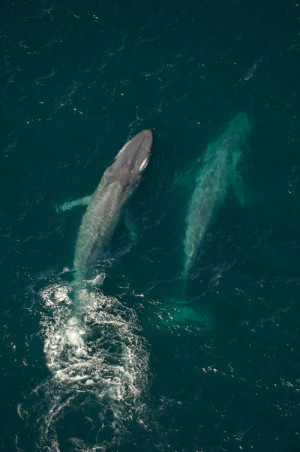 Through developing the model, I also discovered that there’s a maximum limitation on size too. At a certain point, aquatic mammals just can’t eat enough food, no matter how much there is, to sustain larger sizes. For toothed mammals, it appears that this maximum is about the size of a sperm whale. However, baleen whales have figured out a way to eat more efficiently than their toothed cousins, in which they filter entire schools of krill at once from large gulps of water. This feeding strategy seems to allow them to exceed this maximum limit and achieve superwhale sizes.

Long story short, if you want to be a mammal and live in the water for your entire life, you need to get a lot bigger, but you also need to be careful, because you can’t get too much bigger. It’s a tricky balance that aquatic mammals have amazingly mastered at least three times! I’ll stick to my occasional dips in the pool, thank you very much!

Share the post "So, You Want to Live in the Water? A Tale of Why Aquatic Mammals are So Big"