I was just listening to a podcast about how sea sponges use the pores all over their body to “bring in food and release wastes” and I’m pretty sure that’s a scientific way of saying the holes in sponges are all just mouths and buttholes so does that mean that when I’m using a sponge in the shower I’m cleaning my body with mouths and buttholes? Someone get me a marine biologist. And a loofah. And maybe some bleach.  -The Bloggess

Sponges are a bit of a unique case as a loose conglomeration of cells in a body full of pores and channels.  None of this really resembles organs or a digestive system with digesting occurring within individual cells.  However, the Cnidarians, including jellyfish, anemones, and corals,  are all uni-aperture.  We can also add the Ctenophores, the comb jellies, into this lone door group of animals.

In the flatworms, the Platyhelminthes, its mixed bag of one, two, and even more bodily gateways.  Most flatworms have no anus, but some particularly long species do possess an anus. In rare cases, flatworms with very complex branch guts can have more than one anus.  By the way, the plural can be either anuses or ani. 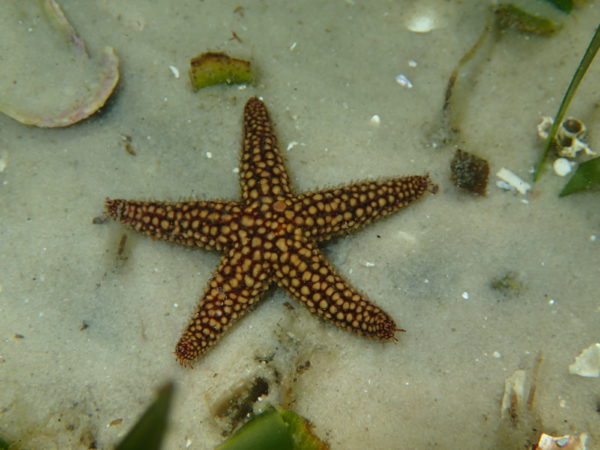 Peeping at the underside of a starfish, you might have only noticed a giant mouth.  You may be thinking to yourself, “I’ve never seen another opening.  Do starfishes have an anus?”  Of course, this is one of the great questions of life.  Indeed,  most starfishes have a complete digestive system with the anus being a small opening on the top. However, there is a large order of starfish, the Paxillosida, that lack an anus.  The only other group of Echinoderms to lack an anus, and even an intestine, is the brittle stars.

A solitary black hole may also occur during specific phases of animals life cycle.  An incomplete digestive system is known in some insects including the sap-sucking aphid relatives, the Phylloxera, during their sexual phase.  Some larvae including those of some fish and proboscis worms can be anally deficient.  Certain lifestyles also can lead to solo agujero such as in parasitic species, like parasitic copepods.

It’s important to remember that all animals start development with one hole, the blastopore.  In the ventrally chosen, a second hole forms later.  So the question remains if some animals form only a single hole is it a mouth that used as anus or anus used as a mouth?  The proverbial digestive pore chicken and egg scenario.

Blastopore formation is started by a protein called disheveled, which gets stuck at the top of the egg and then activates a specific set of genes. In the same location of jellyfish embryos, however, there are genes strikingly similar to the mouth genes of bilaterians. In the sea urchin, a bilaterian, these same mouth genes are also on the top of the embryo. However, disheveled has moved to the bottom. The blastopore forms at this new site of disheveled accumulation, rather than at the mouth. The mouth genes that remain on top still direct the formation of the mouth there. Martindale and Hejnol posit that moving disheveled from the top to the bottom of the embryo in some animals moved the location of blastopore, but that the mouth stayed put. In some bilaterians, like urchins and humans, the blastopore then became the anus. In this scenario all mouths are homologous to each other, whether the animal has one or two holes.

Evolution can be a truly wonderful thing and then sometimes it can produce an animal with a mouth that still uses its anus to feed.