So, uh, I just learned that this is what a pufferfish skeleton looks like, and I think you all should know too pic.twitter.com/ecCXN8RTAV

So what are you looking at other than some truly sweet evolution? 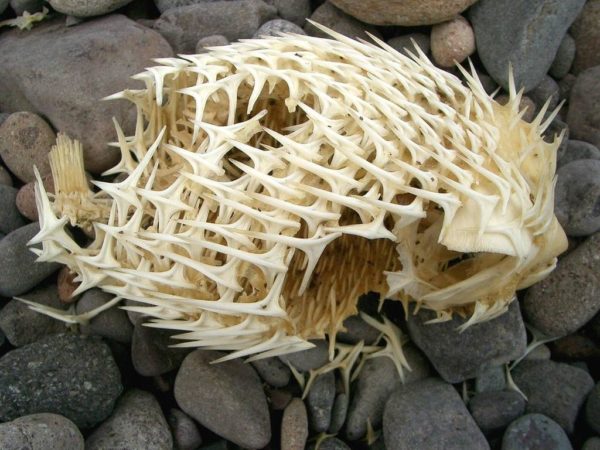 What you are looking at are the spines of pufferfish composed of nanocrystalline hydroxyapatite,  protein(collagen),  and water, the same materials as scales.  Indeed, these spines are just modified scales.  And like other scales, these spines originate during development from the mesoderm layer of the dermis or the skin.

Dr. Brian Sidlauskas, Associate Professor and Curator of Fishes at Oregon State University,  notes puffers evolved from a group of fish (Porcupines, Molids, Triggerfishes, and filefishs) that all possessed ctenoid scales, denoted by small teeth along their outer edges.  “Filefishes actually feel fuzzy.  So it isn’t perhaps too surprising to imagine those scales expanding and getting more and more spiny.”

As you might expect, these spines evolved as anti-predator defense, similar to the ability of puffers to inflate.  However, it looks like the inflation likely evolved before the spikiness.

4 Replies to “You Should Definitely Know about Pufferfish Skeletons”