Holly is the Associate Editor for Deep Sea News 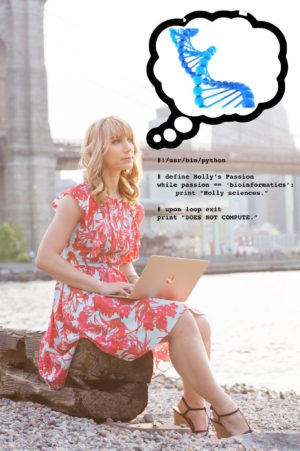 Dr. Holly Bik is an Assistant Professor in the Department of Marine Sciences and Institute of Bioinformatics at the University of Georgia. She obtained her Ph.D. at the National Oceanography Center in Southampton, UK (in conjunction with the Natural History Museum, London), followed by subsequent postdoctoral appointments at the University of New Hampshire, the University of California, Davis. Holly’s research uses badass DNA sequencing and awesome computational biology tools to explore the biodiversity and biogeography of microbial eukaryotes in diverse habitats, with an emphasis on nematode worms in marine and deep-sea sediments. Aside from research, she is heavily involved in science communication and social media, serving as Associate Editor here at Deep Sea News (http://deepseanews.com) and maintaining an active presence on Twitter (@hollybik). She has also written guests posts for a number of external sites (including the Guest Blog at Scientific American), and her writing has been featured in the edited printed compilation Open Lab: The Best Science Writing on the Web.