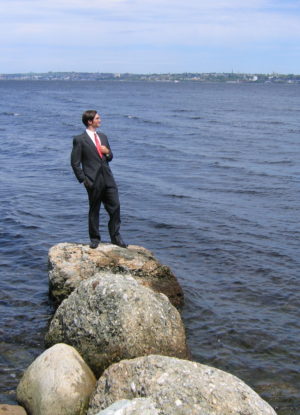 Jarrett Byrnes is an Assistant Professor of Biology at the University of Massachusetts,Boston where his research focuses on the causes and consequences of changes in ocean biodiversity in the anthropocene. He got his Ph.D. from UC Davis in Population Biology in 2008, where he worked out at the Bodega Marine Lab studying how changes in the diversity of predators in the ocean can cascade through whole ecosystems. He was a postdoc at the Santa Barbara Coastal Long-Term Ecological Research site where he fell in love, for once and always, with kelp. But then had a dalliance with data synthesis as a postdoc at the National Center for Ecological Analysis and Synthesis where he helped co-found the #SciFund challenge to help scientists do outreach and crowdfund their research.

When not on land teaching students about the ins and outs and awesomeness of statistical modeling, we find Jarrett either underwater wrapped in kelp or wandering the mosquito filled marshes of New England, quadrat in hand. Jarrett comes to DSN after blogging since 2004 at I’m a Chordata! Urochordata! which plunged him into the world of science communication. He also maintains an active citizen science program for the remote sensing of kelp over at Floating Forests.