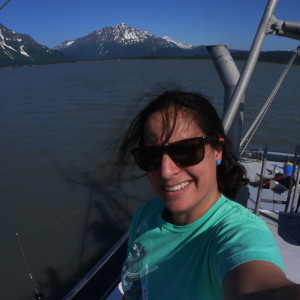 Kim Martini is a physical oceanographer at the Joint Institute for the Studyof the Atmosphere and Ocean at the University of Washington in Seattle, where she studies internal waves and turbulence. Currently she is focusing on how sea ice loss could alter physical and biogeochemical processes in the Arctic.

After receiving her Ph.D. from the University of Washington in 2010, she moved to Fairbanks, Alaska for a postdoc. After three years of awesome wilderness living, she moved back to Seattle.Kim’s other passion is

new and novel ocean observing technologies. Quite simply, her goal in life is to throw expensive s**t into the ocean. She also believes that broad scale data dissemination is a vital, but often overlooked, part of oceanographic research. Her goal is to create simple and universal tools to not only quickly process data, but for researchers to easily share these data using standardized public repositories.