The number three slot is taken over by sponges that are not just happy with filter feeding.  These sponges have a taste for flesh…human flesh.  I jest, they don’t eat all humans just babies.  Seriously, these sponges go after tiny crustaceans which seem to be the tasty preference for many of the carnivores in the countdown.  From Dr. Vacelet

The prey, mostly small crustaceans and other invertebrates provided
with setae or thin appendages, is trapped on the surface of appendages
of the sponges, which is lined by tiny hook-like spicules acting as
Velcro. Then the cells of the sponge migrate towards the prey, and
individually phagocytize and digest fragment of the prey. This is a
very unusual phenomenon in pluricellular animals, a unique case in
which a non-microscopic prey is digested in the absence of any
digestive cavity. This has been investigated in one species, but is
likely general for all the carnivorous sponges (family Cladorhizidae),
which are deep-sea species usually a few cm high (not really dangerous
for a diver…).

The first species of this group was discovered recently in 1995 by scientists in French caves.  Since the initial discovery many more species have been discovered on the abyssal plains, seamounts, and virtually every other nook and cranny of the deep.  The four genera have quite different forms ranging from grass-like, to a candelabra shape, to my personal favorite a lollipop tree. 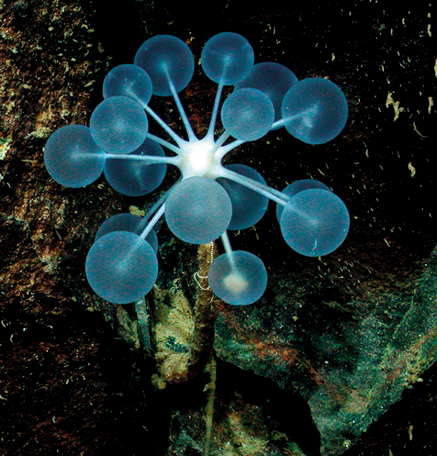 The carnivorous Asbestopluma sp (white sponge in lower right) in front of a goiter sponge.  Photo courtesy of MBARI and MBNMS