Each year the International Institute for Species Exploration announces a list of the Top 10 New Species for the preceding calendar year. Of the top 10 for 2009 are two deep-sea species. The Financial Times also list there top five deep-sea species.  Very cool even if all of them are vertebrates. 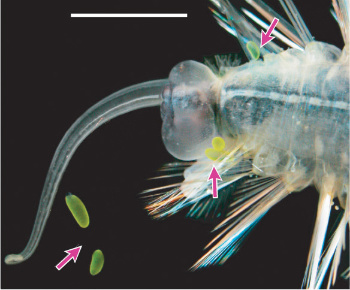 Of course here at DSN, we have long known these species are the shiznit.  The carnivorous sponges made are #3 for the 27 best deep-sea species.

The number three slot is taken over by sponges that are not just happy with filter feeding.  These sponges have a taste for flesh…human flesh.  I jest, they don’t eat all humans just babies.  Seriously, these sponges go after tiny crustaceans which seem to be the tasty preference for many of the carnivores in the countdown.  From Dr. Vacelet, “The prey, mostly small crustaceans and other invertebrates provided with setae or thin appendages, is trapped on the surface of appendages of the sponges, which is lined by tiny hook-like spicules acting as Velcro. Then the cells of the sponge migrate towards the prey, and individually phagocytize and digest fragment of the prey.” The first species of this group was discovered recently in 1995 by scientists in French caves.  Since the initial discovery many more species have been discovered on the abyssal plains, seamounts, and virtually every other nook and cranny of the deep.  The four genera have quite different forms ranging from grass-like, to a candelabra shape, to my personal favorite a lollipop tree.

This carnivorous sponges are so cool they even grace my personal homepage. In August 2009, I also wrote about the bombardier worms.

Osborn et al. report in Science seven previously unknown species (0.7 to 3.6 inches) of annelid worms hailing from the deep pelagic (>1800m).  All the new species form a distinctive group within the Cirratuliformia,a recently proposed higher taxonomic group that encompases seven other groups currently recognized as families.  The species here fall in the currently described Acrocirridae but appear to be fairly genetically distinct from other known cirratuliforms. One of the really cool findings, in addition to the distinctive morphological adaptations of the group described below, is this would represent a third, and independent, invasion of the typically benthic, i.e. living in the mood ooze of the seefloor, cirratuliforms into the nice, clean pelagic realm.  It is not just taxonomy and genes that make this group special.  Scratch that.  It is all taxonomy and genes that make this group special!  Five of these species have pairs of oval-shaped organs evolved from branchaie, i.e. gills, that serve as green “bioluminescent bombs”.  These bombs can be dropped like depth charges, releasing brilliant flashes, and speculated to ward off encroaching predators. The presence of smaller B-Bombs are thought to imply that these species can regenerate them as needed.