I got the dreaded pop-up of doom as my macbook told me it could not install the latest update because I out of space. So I decided to poke around, see where I could save space and delete files. Sitting on my desktop for a couple years was an aptly titled folder, “Photos to Sort”, where I habitually dumped images and video from my point and shoot camera. As I deleted the thousand or so blurry images of my son running around like a lobster in a steambath, I parsed out files for upload to Facebook, Youtube, Flickr or for blogging.

In March last year I attended the 2008 Ocean Sciences Meeting put on by the American Society of Limnology and Oceanography in Orlando, FL. It was a good conference, with two special sessions devoted to deep sea biology! I presented a poster on new species of anemones from near hydrothermal vents in the Lau Basin. That paper is currently in press. I also took a few pictures of some of the posters. Here is one that caught my eye in my spring macbook cleaning that I thought I would share. It is a gulper eel black swallower, Chiasmodon niger, with a bit more snake mackerel than it can chew! The poster was by John Yeh and Jeffrey Drazen and titled: “DEPTH ZONATION OF DEEP-SEA MEGAFAUNAL SCAVENGERS OF THE HAWAIIIAN ISLANDS”.

We are big fans of the Drazen Lab’s work here. They were kind enough to let us release this awesome deep sea shark video last year. I noticed recently that Yeh and Drazen’s work on deep sea scavengers was published just this month in Deep Sea Research. Several baited camera traps were placed around the Hawaiian islands from depths of 250 to 4,753 meters.

They were interested in capturing on film who and how many scavenger species showed up at their traps. For the scavengers in question, finding the traps was not a problem. A synaphrobranchid eel was spotted only 10 minutes into the experiment! Yeh and Drazen also documented the first occurrence of a zoarcid fish in Hawaiian waters. Zoarcids are often found near vents, though they occur elsewhere in the deep-sea.

The most striking result was the discovery of a break in scavenger community composition at around 500-1,000 meters. This also correlated with a drop in the local oxygen minimum zone in the ocean. There appears to be a physiological cause, as a result of dissolved oxygen concentration, for the change in the scavenger community composition. In general, crustaceans were more abundant at shallower depths and teleost fish dominated the deeper study sites. This may have to do with an organisms ability to use oxygen efficiently under pressure.

Another find, contrary to some research (including our very own Dr. M’s), included non-unanimous support for the “bigger is deeper” hypothesis. In synaphrobranchid eels that spanned both shallow and deep sites, a significant negative relationship between length and depth was found. These fish were smaller at deeper depths. This was not previously reported for scavenging fish before. The authors thought the eel might instead be a specialist of some sort, not a scavenger. Though examination of stomach contents and jaw morphology suggest it is indeed a scavenger, Yeh and Drazen acknowledge sampling biases and suggest a targeted sampling program for this species to test whether this result is real or a sampling artifact.

This study is interesting in that it detected a major faunal break at 1,000 meters correlated with a sharp decrease in oxygen. But it also notes many unusual taxonomic and natural history observations. Though anecdotal, they add to the literature of observations on some of the most rarely seen or studied animals on this planet. I’ll leave this post with this great taxonomic guide they published in their article. 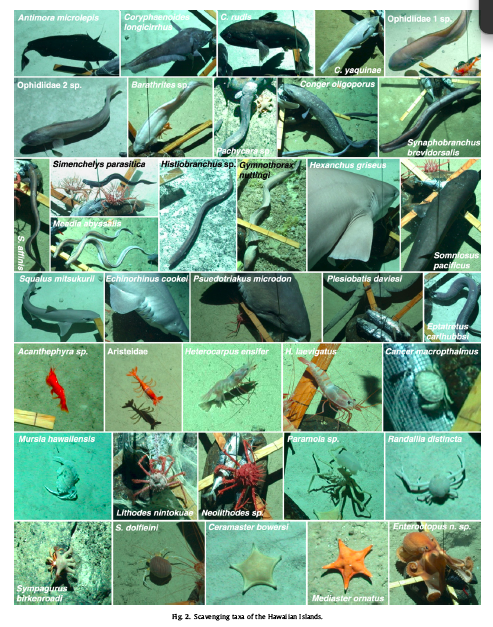 8 Replies to “Big Gulpers In The Deep”