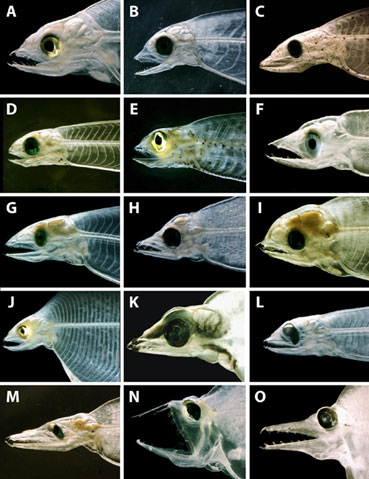 There are all sort of eels in this world. Big ones, small ones, gulper eels, morays. But the most tastiest are the Japanese freshwater eel. Nothing says Ohayo Gozaimasu like fresh eel sushi topped with a mountain of pickled ginger and lightly spackled with sweet sweet wasabe. Freshwater eels are diadromous, meaning they spent part of life cycle in the ocean and part in freshwater, like salmon. But there is evidence that they get some of their salty flavor from the deep-sea, evolutionarily speaking that is.

Inoue and colleagues studied the phylogeny of the Angulliformes, better known to you and me as ecstasy gently wrapped in nori, based on the entire mitochondrial genome using 56 representative taxa representing all 19 families. The higher level classification of the eels is way polyphyletic (and paraphyletic) and requires serious revision. The real kicker though is that Anguilla, the freshwater eel, is the most derived of the eels meaning it is newest to evolutionary scene, and is nested within a group of deep-sea eels. A screenshot of the relevant portion of the maximum likelihood tree is below.  Note at the top, the “saccopharyngiforms” should look familiar to DSN readers. We got the gulper eel, the dragonfish, and below that clade the group consisting of snipe eels. All of those eels with the purple dot in the screenshot below are mid-water species occurring between 200-3000 meters depths. Underneath it all are the freshwater eels.

It is still unclear how the shift occurred though. If the ancestral freshwater eel lived in shallow oceans or estuaries then it may have ocassionally foraged in freshwater streams, making the transition more gradual. Anguilla still spawns in the open ocean much like its closest relatives in the family Serrivomeridae. In fact, their larvae mix in the surface layer of the ocean. Furthermore, the japanese freshwater eel, Anguilla japonica, was recently found at 220-280 meters depth. Its fairly energetically demanding to dive that deep if your purpose is only to spawn.