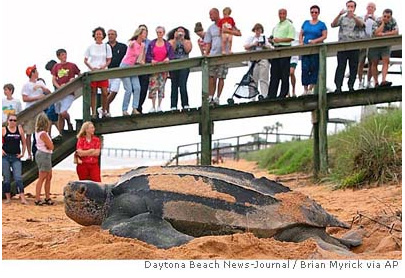 When you think of cold marine environments, you probably think of blubber-wrapped seals, whales, and walruses, big, furry bears, or a huddled mass of penguins. What do those animals have in common? They are endotherms, their body temperature maintenance depends on consistently high levels of heat generated (and retained) internally.

Animals you probably do not identify with cold conditions are reptiles. Generally speaking, reptiles (e.g. lizards, snakes, and turtles) are ectotherms, meaning that their body temperatures depend on ambient temperatures, such that reptiles in fluctuating thermal environments must behaviorally seek microclimates that will best suit their physiological needs. Thus, because they rely on heat from their surroundings, reptiles typically don’t handle cold environments very well.

In the 1960s, marine biologist Sherman Bleakney collected fishermen’s anecdotes, observations, and specimens of noteworthy large-bodied marine animals in frigid Nova Scotian waters. However, the fishermen weren’t telling stories about the grey seals or the minke whales. The tales were about turtles. Big turtles.

Bleakney and others had heard about the rotund, inky-blue turtles called leatherbacks occasionally reported in Nova Scotia, but considered them rare visitors that inadvertently appeared in these fog-coated cold waters. But once he put together all of the records, he realized that these critters were not lost; they were regulars.

Leatherbacks are extraordinary for many reasons, but perhaps their most impressive characteristic is their expansive distribution. They have the widest geographic and thermal range of any reptile species. Their tolerance of cold water allows them to exploit highly productive marine foodwebs at high latitudes and extreme depths that are unavailable to other sea turtle species. The fundamental question that Bleakney and others asked was: how can these turtles go where no other reptiles would dare?

Some pioneering work in the 1970s established that leatherbacks were able to maintain elevated and relatively consistent body temperatures in cold water (Frair et al., 1972). This was straightforward and not necessarily surprising given the observations in Nova Scotia, but the finding presented a significant challenge for the endotherm-ectotherm dichotomy: leatherbacks are turtles, but turtles are reptiles, and reptiles are not supposed to be able to generate and retain heat over long periods of time, especially in cold water. So how do leatherbacks it? Were they mammals in a turtle’s body?

With this question in mind, Jim Spotila and Frank Paladino hit the beaches of Costa Rica in the 1980s to solve the riddle of leatherback thermoregulation. While fending off hoards of bloodthirsty mosquitoes, sneaky scorpions, and earth-rumbling thunderstorms, they discovered that leatherback metabolic rates were much lower than those of mammals, but slightly higher than those of reptiles sized to leatherback size.

Using these metabolic rates in biophysical models, Paladino et al. (1990) figured out that leatherbacks could combine these relatively low, but consistent, metabolic rates with their huge body mass, a thick layer of peripheral fat for insulation, and adjustments in blood to stay warm in cold Canadian waters and to avoid overheating in toasty tropical Caribbean waters.

Because leatherbacks do not fit neatly into either the ectothermy or endothermy categories, their unique integration of heat generation and retention adaptations earned them a different term: “gigantotherms.”

A recent review of sea turtle metabolism and thermoregulation confirmed that leatherback metabolic rates are not significantly different from those expected for leatherback-sized reptiles, and that large body size is crucial to heat retention (Wallace and Jones, 2008). Leatherbacks can alter swimming behavior to increase heat generated internally through vigorous swimming (Bostrom and Jones, 2007), or by shuttling between different water temperatures to regulate heat loss, but their reptilian metabolic rates mean that being huge is necessary to avoid losing body heat. In fact, researchers have determined a body size threshold (~100 cm carapace length) below which leatherbacks are unable to penetrate water temperatures colder than 26°C, which means that to get in to the cold water habitats, big bodies are required (Eckert 2002).

Leatherbacks’ considerable girth is important for staying warm, but does it continue to their deep diving prowess? In general, for an air-breathing diver, buoyancy decreases as an animal gets bigger, such that really small sea turtles have to work harder to overcome positive buoyancy near the surface, but adult turtles can power down more efficiently. Additionally, large body size can mean higher oxygen stores in blood and muscle, facilitating longer and deeper trips beneath the ocean’s surface away from the turtle’s next breath.

However, these size-based differences in diving and thermoregulation appear to disappear after the 100 cm threshold, as Searcher (the smallest turtle in the Great Turtle Race) showed with a very respectable finish in the Cold Water Challenge. The Iron Turtle competition should also bear this out. There is no size advantage for extreme diving – stay tuned to www.GreatTurtleRace.org to find out more!

Large-bodied leatherback turtles are gigantotherms because they integrate physiology, anatomy, and behavior to be able to forage in waters cold enough to kill a human in a matter of minutes, something no other reptiles on the planet can do.

At least no living reptile…

Leatherbacks are not the Earth’s only gigantothermic reptiles; dinosaurs employed the same mechanisms to range from the tropics to temperate latitudes during their heyday.

So at least now you know that size most definitely matters to turtles, particularly if you are a leatherback doing an impression of polar bears or penguins…