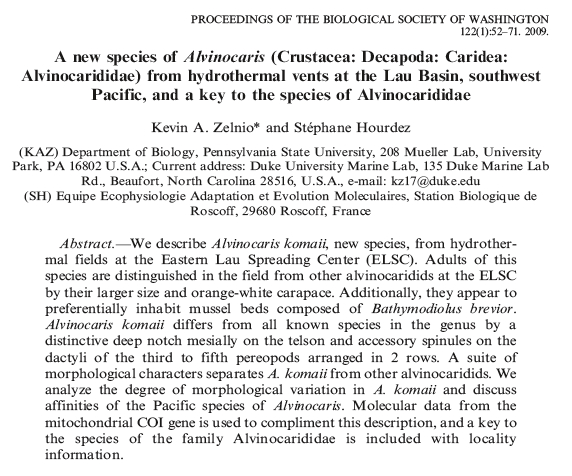 Kevin described a new species today. What have you done?

KZ is now among the scientifically published. Occurring this week in the Proceedings of the Biological Society of Washington is “A new species of Alvinocaris (Crustacea: Decapoda: Caridea: Alvinocarididae) from hydrothermal vents at the Lau Basin, southwest Pacific, and a key to the species of Alvinocarididae“, Kevin’s very first published paper!  I might add here that I am rather impressed that his first paper also happens to be description of a new species.  This new species is not just some uncharismatic, minute, amorphous organisms live in the muck of the seafloor…like the ones I study.  No ladies and gentlemen this is a real contender for charismatic megafauna.  Zelnio and Hourez describe an new species of Alvinocaris, an abundant an important shrimp globally at hydrothermal vents.  A. komaii is bigger and more probably more bad ass than all the other Alvinocarids.  Of course bad ass is hard to quantify, you just know it when you see it, and there are much better defining features, notches and spinules, but KZ can tell you all about that.  But Zelnio and Hourdez don’t stop there with a description of new species.  Oh no boys and girls, you also get a a pratcial guide to to all the species in the family with localities.  But now for a limited time, they are also offering a molecular phylogeny of the group.

Seriously though, your first published scientific article is a thing of pride and a very special time.  Raise your glasses…and drop a line here congratulating Kevin.