Dr. M was kind enough to mention and congratulate me on my first publication several months back. I just had two more papers published in the time since then! I always meant to give the back story on it but hadn’t the time while I madly finished writing my Masters degree. I’ve finished and got all my signatures on August 3rd! I’ll write about the other 2 papers shortly, but for now I’d like to take a little time to tell you all a little tale of a little shrimp from a little hydrothermal vent in a big ocean.

You see kids, once upon a time I got to go on research cruises. Those were glorious days when I sailed out from exotic ports, drank the local flavors, backpacked around Fiji, and jammed up with the acoustic on the top deck The thrill of discovering something new always enticed me and I especially paid close attention to the critters that were brought up. Years of observation and identification have indeed twisted my mind so much that I dream about species and think constantly about characters. I go about my daily routine as if it were being read from a dichotomous key.

I didn’t choose to find this new species of vent shrimp – it chose me. It my first cruise for material directly contributing to my masters thesis. I was taking quantitative samples of mussel and snail beds for studying the role of foundation species in community structure at vents. Alvinocaridid shrimp are conspicuous members of deep sea hydrothermal vents, found nearly worldwide. To date, there are 7 recognized genera. Alvinocaris lusca was the first to described by the late Drs. Austin Williams and Fenner Chace Jr. in 1982 and has the most species, with 11 recognized species as of time of publication (including mine). Alvinocaris means “Alvin’s shrimp”, Alvin being the famous submersible that was used when the first hydrothermal vents were studied (lusca means “blinded”, referring to it’s degenerate, fused eyes).

This was an excellent species to learn taxonomy on. The characters were clear and unambiguous, there were not too many species described in the genus, or the family for that matter, and my coauthor was a superb mentor who taught me many time-saving tricks and carefully coached me to be a thorough, honest, and integrative scientist. The pieces really fell together with this species.

The actual description of a species is very straight-forward and formulaic. The terminology has been in place for tens of years, all that is needed is to fill in the blanks for your species and note any other characteristics not present in previously studied relatives. Many taxonomists stop with the description and might add a paragraph of natural history notes. I wanted to do more. First, I felt it was important to understand the evolutionary context of this species with previously described species. Thankfully, Dr. Tim Shank provided a comprehensive phylogeny of the shrimp family so GenBank was already populated with mitochondrial COI sequences. We sequenced a few individuals of our species, but the result wasn’t very clear. It appeared to be more basal to the genus, but statistical support wasn’t strong for its branch. In fact, COI appeared unreliable for ascertaining deeper relationships. A major multigene phylogeny in underway by Dr. Shank that should clear up all the details in this important shrimp family.

Why is this group of shrimp so important anyways? It turns out that all Alvinocaridids only live at chemosynthetic ecosystems, in particular vents and methane seeps. The phylogeny of this family should track their dispersal across the interconnected mid-ocean ridge system (see map to left). Their endemicity to deep sea chemosynthetic environments makes them useful organisms to use as indicators of historical dispersal of vent larvae. In ecology, the unit of measure is often the ‘species’, which is why it is important to describe and catalogue the distributions of all of the Earth’s species. A more accurate prediction of historical processes can be determined as we add data to the tree of life.

My contribution will hopefully be useful to people working in vent biogeography and shrimp phylogenetics. To facilitate accurate identification of members of this shrimp family, I updated a dichotomous key of all 22 species that make up this happy crustaceous family.

The shrimp itself is really neat. A nice long, serrated rostrum adorns its head mimicking an 80s punk rocker loitering at CBGB’s. The distinctive character that sets it apart from other Alvinocaris is the distinct notch in the middle of the tail, garnished with a nice set of spikes to puts Needleman to shame. My favorite part of this paper was making the line drawings. I took several detailed pictures under a dissecting microscope, mosaicked them together and traced the outlines in Adobe Illustrator, like below.

This is corroborated by actually looking at it under the scope to make sure I got every little hair and spine! The photos are great, especially for someone like me that lacks any drawing ability whatsoever, but can be misleading because you may be out of focus for very fine details, like setae or spines. This is why I corroborate my line drawing with the actual specimen under the microscope. Its very important to get the details right in a species description, drawings such as these below may be critical for a worker to compare their sample with mine. The end result is a shrimp turned into art (in my humble opinion anyways!). 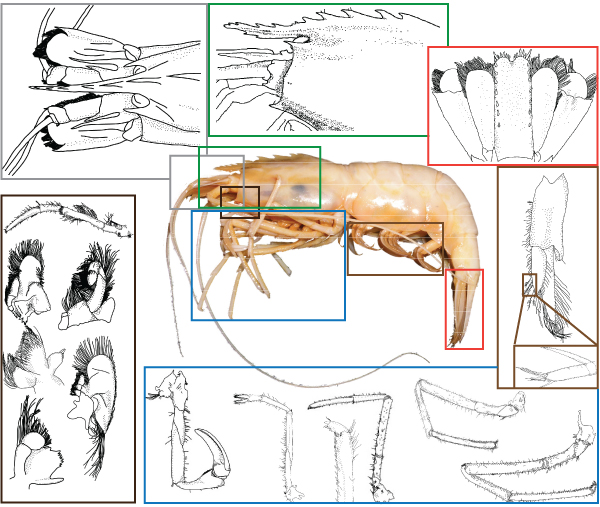 Alvinocaris komaii whole and line drawings of its body parts. Mouth parts (left, bottom) include from bottom Mandible, Maxillae 1 & 2, Maxillipeds 1-3. Pereopods (legs, bottom) 1-5 left to right, detail of the third pereopod given. An example of a Pleopod is given (right, middle), inset is the appendix masculina, or shrimp penis. The telson (right, top) the central part with the notch in the end, flanked by uropods.

Alvinocaris komaii is named after Dr. Tomoyuki Komai of the Natural History Museum and Institute, Chiba Japan. It is a great honor to name a species after him. His extensive contributions have set the standard in descriptions of species in the Alvinocarididae. Very thorough and accurate with detailed drawings and natural history observations. As he is nearing retirement, I was shocked to learn that he had not been yet honored by a specific epithet. It is appropriate then that a younger generation follow in his footsteps, but add on the techniques that we have “grown up” with,  such as phylogenetics.  There will always be a place for morphological systematics because species need a very specific definition if it is to be of use in evolutionary and ecological studies. The addition of a “barcode” genetic sequence, or multiple sequences, ensure that the individual described has a defined genetic sequence and set of unique morphological characteristics appended to it, ensuring less ambiguity for future workers.

Williams A, Chace F (1982) A new caridean shrimp of the family Bresiliidae from thermal vents of the Galapagos Rift. Journal of Crustacean Biology 2:136-142.  JSTOR