We might as well call it Turtle Week at DSN. The Boss suggested we put together a few highlights from DSN stories that rolled out over the years, presented here in chronological order. Keep your eyes peeled for fresh news and interviews from the Great Turtle Race in coming days. 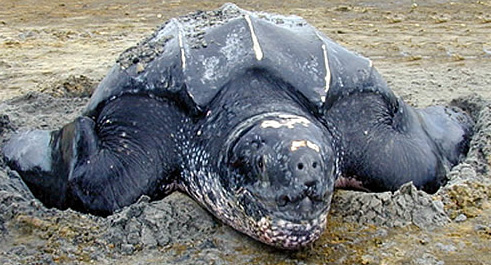 Easter is a difficult time for turtles in Mexico because of the Lenten tradition of eating turtles and their eggs. Sea turtle advocates are calling on the Pope to explain that sea turtles are not fish, while enlisting supermodel Dorismar to explain turtle eggs do not make you sexy.

Bryan Wallace answers the question “whatever happened to that big old turtle,” in reference to the most famous turtle picture ever at Deep Sea News. This story made the rounds. By the time Bryan wrote this article, the original post had accounted for 25% of DSN recent daily visitors, with 100 comments to date.

The cave where turtles die
http://www.deepseanews.com/2008/07/the-cave-where-turtles-die-video/

A classic noir film in the turtle genre. Voila mystique.

A reminder that not all turtle news is bad news. Texas turtles are on the rebound after years of neglect, thanks to natural, protected nesting beaches and shrimp trawl net modifications.

A recent fly-thru video of Adelita’s migration across the North Pacific viewable in Google Earth. Adelita was J Nichol’s first tagged turtle. She traveled two years from Baja California to Japan, then disappeared. J is a friend and colleague, you can read his blog here.