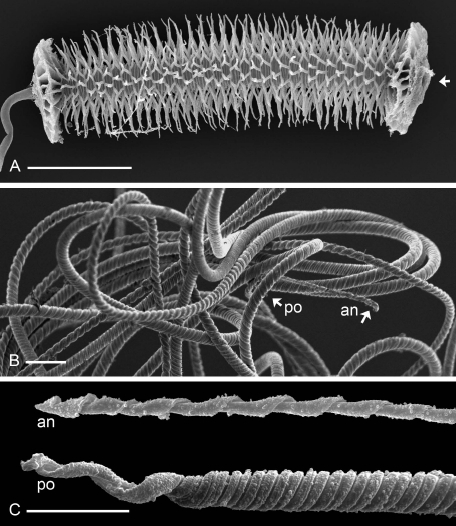 From Matzke-Karasz et al. 2009. A. Zenker Organ, a specialized organ modified from the vas deferen that serves asa pump for giant sperm. B&C The heavily coiled giant sperm with anteriour (an) and posterior (po) ends shown.

Barnacles may have big penises but ostracodes of the superfamily Cypridoidea have giant sperm. Ostracode range are mostly near a millimeter but sperm range from several hundred micrometers to several millimeters. Yes on average, ostracode sperm is longer than an ostracode. On study suggest that these sperm insert two giant paternal mitochondrial sequences into the zygote which of course contrasts to the dogma of strict maternal inheritance of mitochondrial DNA. 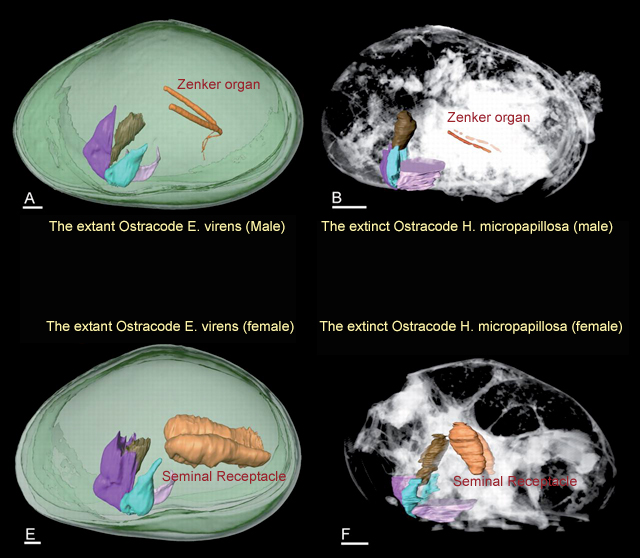 So the question is, when did giant sperm arise in ostracodes? A recent study suggests that giant ostrocode sperm was terrorizing female ostracodes as early as 100 million years ago. Using a technique called holotomography, researchers were able to reconstruct the internal anatomy of fossil ostracods from the Cretaceous. Males contained structures analogous to Zenker organs, specialized organs for pumping large sperm. Females had enlarged seminal receptacles, a sperm storage organ, only know from modern ostracode species with giant sperm. “Thus, giant sperm had developed in cypridoidean ostracodes by ~100 million years ago.” You can see movies of the digital reconstructions here.