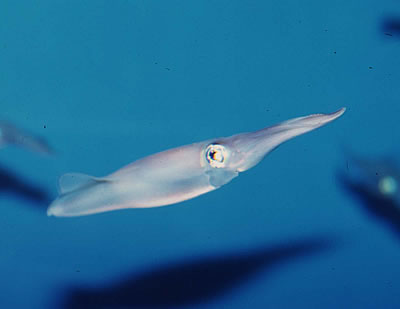 All sperm are not the same. Among fruit flies the longer the reproductive tract of the female the longer the sperm. In tiny crustaceans called ostracods, sperm length can range from several hundred micrometers to several millimeters. And here is some trivia for your next cocktail party, sperm in ostracods can even be longer than the ostracod itself. What is the reason for all this variation in the male seed other than terrorizing females?

First there is sperm rivalry. Feel free to borrow the phrase sperm rivalry for your next party as well. A sperm that is longer and larger will swim faster, fertilizing the egg first. The environment also plays a big role. Whether the sperm and egg pair up out in the open for the whole world to see or within the hot love nest of a female can determine sperm size. In frogs sperm size can vary depending on whether the sexual rendezvous occurs on land or in the water. In the Bleeker’s squid it is both rivalry and the environment that shapes the sperm.

Female Bleeker’s squids can recieve sperm either in a seminal receptacle (location marked by blue arrow above), a specialized sac for holding sperm near her mouth (yes you read that right) or an internal oviduct (red arrow), the tube by which the egg passes from an ovary, behind her head. If you’re a big male and fight off the all other big males, you’re crowned the consort male! As a consort male you slide along side the female, put on some Marvin Gaye, and place your packets of sperm directly into her oviduct. At this point you guard her. She may interpret this as snuggling. This is a win for both of you. You’re ensuring no other males can mate with her until she spawns.

But maybe you’re not a consort male and have your small squid ass handed to you on platter all day long. Never despair! You are the sneaker male! A sneaker male rushes to the female and her consort then mates with the female head to head. Yeah baby stare into my alluring squid eyes. F you big consort squid and F your Marvin Gaye. During this tryst, the sneaker male places his sperm packets near the seminal receptacle.

During the actual spawning event both the consort and sneaker male’s sperms can fertilize egg.

Due to the process of egg laying in L.bleekeri, insemination and fertilization can occur in two sites … a string of eggs is extruded from the oviduct (inside the mantle cavity) where it is exposed to consort sperm inside the oviduct (i.e. internal fertilization conditions), and the female pulls the egg string through her siphon and into position within her arm crown around mouth, where it is exposed to sneaker sperm (i.e. external fertilization conditions), before she deposits the egg string onto the sea bed. 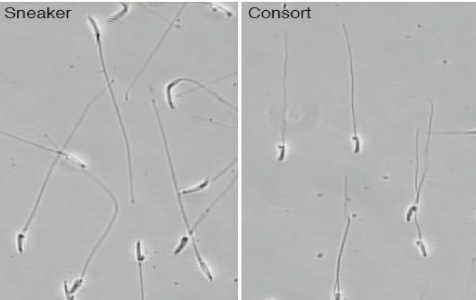 An obvious advantage goes to the consort because of the proximity of his sperm to the eggs. But sneaker males up the ante for the game by producing huge sperm over 30% larger than consort males (above photo). Why? You might guess this is because brawny sperm could outcompete their scrawny competitors. But no difference in sperm velocity is seen between sneaker and consort males. For you information, their sperm swims at about 1/3 a mile per hour. The larger sperm size of sneaker males is likely related to the environment of the external fertilization conditions. A larger sperm may be better able to swim in viscous environment or may need to be larger to hold more mitochondria (the power generator for cells) because it needs to cover more swimming distance to eventually reach the egg.

So the moral of the story is to…well you’ve got it by now.