Figure 2 from Choy et al. 2009. Log-transformed mean THg concentrations (μg/kg) at the mean log(mass) of 4.24 or approximately 17.4 kg plotted as a function of median depth of occurrence for 9 species of pelagic fishes.

Mercury is distributed across the earth whether it is in the atmosphere, biosphere, or geosphere.  In the marine realm, the methylated form of mercury (CH3Hg+) is the form of mercury most easily bioaccumulated. But let’s take a step back and ask how the oceans got mercury in the first place.  One source may be from the atmosphere.  Fifty percent of atmospheric concentrations originate from volcanic activity and recently, the other fifty percent from anthropogenic sources such as mining activities and manufacturing.  Some input may also occur from terrestrial sources such as rivers and groundwater carrying inorganic mercury into coastal regions. Recent work suggests that biomediated methylation of mercury occurs in the oceans by sulfate-reducing bacteria living in low oxygen regions. The study suggests that these bacteria sink to mid-depths, where they decompose and release methylmercury. This biomethylated mercury accounts for as much as 29% of all mercury in subsurface ocean waters of the Pacific.  Methylated mercury concentrations are highest below the thermocline and nearly undetectable in surface waters. Findings for another groups largely corroborate this model for the Mediterranean, i.e. not all methylated mercury comes directly from coastal or river sources .  But the relative contribution of all these sources, whether the methylated form that enters into the ocean or formed in situ, and many other specifics of the process are either unknown or only recently understood.

These results lend support for both the in situ biomethylation of mercury in the open oceans and that it is enhanced in oxygen poor depths.  Choy et. al’s data support recent conclusions that the main source of methylmercury in the open ocean is from the deep water column and not export from coastal regions or the euphotic zone.”

Of course, this also suggests that eating deep-sea fish may also put you at a much greater risk of mercury poisoning.  Just one of the many reasons not to eat our deep-sea brethren. 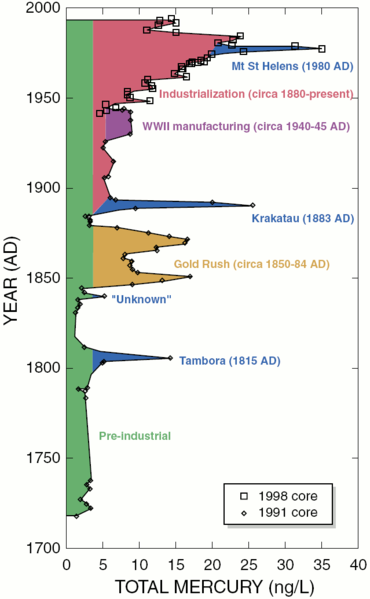 Source Wikipedia Commons: This chart shows the level of atmospheric mercury deposition detected in ice cores from the Upper Fremont Glacier in Wyoming. Heightened deposition rates correspond to volcanic and anthropogenic events over the past 270 years. Pre-industrial deposition rates can be conservatively extrapolated to present time (4 ng/L; in green) to illustrate the increase during the past 100 years (in red) and significant decreases in the past 15-20 years.