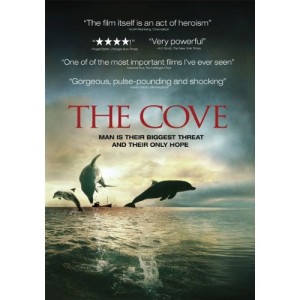 Disclaimer: This review may not appropriate for all audiences. Certainly not anyone that is sensitive to violence against dolphins. If you think you may be too uncomfortable with this type of content, please do not read any further.

A week ago I was approached by the PR department that filmed The Cove, an multi-award winning documentary, to see if I was interested in reviewing the movie for my audience. I’ve seen the movie reviewed on other sites and Deep Sea News has taken an interest in the issue of mercury poisoning from fish and dolphin meat, so I was naturally curious. Sunday night I made the leap and saw exactly why this film is so talked about and why it racks up film festival awards, recently taking home an Oscar for Best Feature Documentary.

Many documentaries, especially environmental documentaries, annoy me because the end up being about the person filming it or being filmed. The Cove starts off about the man Ric O’Barry. Ric was the trainer for Flipper, the popular ’60s TV dolphin. In the movie, Flipper is credited with generating the lust for dolphin worship that is today a multi-billion dollar industry based primarily upon marine mammal captivity. As Ric ironically put it, “the dolphins smile is nature greatest deception, it gives the illusion they are always happy”. As the beginning progressed it became apparent that Ric’s role was only one cog a greater wheel of commitment by a diverse group of talented individuals. While blatantly playing on emotion, The Cove was able to demonstrate the simple fact of a mass annual dolphin slaughter and the role that played throughout a local Japanese community.

The paradox is that the dolphins need to be harvested live for sea life amusement parks and dolphin-swimming “experiences” that have sprouted up all over the world in many tropical and temperate areas. Each live Taiji dolphin that is sold to a trainer brings in a lucrative US$150,ooo. In contrast, a dolphin is only worth US$6,000 as meat, still nothing to laugh at. The meat is sold throughout Japan, but most of it stays in the community where the government purchases it for mandatory free school lunches that all Japanese schoolchildren must eat. Yet another irony that was not lost on me is that in Taiji one can can buy and eat dolphin and whale meat in same venue where you can see them performing acrobatics in an amusement show.

You might say what is the problem with the Taiji fishermen harvesting dolphin for local consumption? If you have been following Deep Sea News for awhile then you know we are not dolphin-hugging eco-hippies. While the movie necessarily pulls at heart strings, there are two larger issues that they successfully bring up: the issue of inhumane methods of killing and , as they put it in the movie, “dolphins are swimming toxic dump sites”.

Being an organismal biologist I can consider myself pretty tough to the grime, blood, guts and smell of slicing and dicing my way though most of tree of life. I even had the occasion to wade knee deep in a deceased whale to dissect out the vertebrae (it was one week ripe by then). Its all part of the job. As a humane biologist, I try to be efficient and thoughtful in how I approach fixing and preserving my samples. Even when I was a kid fishing with my father and gramps, I was always taught to quickly snap the neck to make it a quick and easy death for the fish. By vegan standards I am a murderous wretch but as an outdoorsman or biologist I respect the fauna I decimate whether it is for food or scientific study.

After the story builds from a series of reconnaissance missions and a sort of societal background, they show the horrible footage that you have been anticipating all film. There is no words to describe the amount of blood and thriving dolphin bodies. No words could express my uncomfortableness at the nonchalant attitudes of the hunters and how they effortlessly stabbed the herded dolphins and let them bleed to death while swimming insanely looking for a way out. Seeing the snorkeling fishermen waltz out of the blood-drenched depths and light up a cigarette without even the slightest sense of remorse or respect was troubling.

While the emotional aspect of the story might be enough to rile up many viewers, the greater story is the neglect of the Japanese government to its own people. As a top predator in the ocean, dolphin meat is laden with mercury. This is born out of several studies. It is a fact. You can measure it. You can compare it to standards and compare it to other animals. You can take a strand of human hair and calculate the exact amount of mercury in his or her body. In Japan, the acceptable level of mercury in tissue is 0.4 ppm (according to the film). The crew of The Cove found dolphin meat in a market with 2000 ppm mercury.

Mercury is not an efficient killer. The very definition of mercury poisoning, Minamata Disease, was defined in Japan. It is not a slow, painless, easy death. First your hands and feet go numb, you lose your vision and hearing, and cannot speak. Before paralysis sets in and you die in a coma, there might be a couple weeks of insanity. It is a neurological disorder, not a disease. It is not contagious. Children are the most susceptible. Since they are so small their little livers cannot detoxify the 3 orders of magnitude mercury being spoonfed to them in their mandatory school lunches. The Cove does an excellent job highlighting the fact that eating dolphin is very bad. Sadly, these points were lost on the Japanese Ministry of Fisheries. When confronted by Ric O’Barry, the Minister sat smugly in his chair saying he does not think there is enough science done to support the claims. An argument used when you’ve used your last argument.

Some people might argue that a movie like The Cove is one-sided and appeals to the wealthy, elite Western ideals and culture. By weaving in the toxicity and science aspect alongside the emotional and animal intelligence aspect they ensure the argument is a sensible one: Don’t hunt or eat dolphin. They also thwart some of the one-sided arguments by interviewing locals in large cities away from the actions of the Taiji fishermen. The people they showed in the movie did not know dolphin hunting occurred or that people still ate dolphin meat. I have known about these issues for a few years now and familiarized myself with some of the data and sentiment. It is one thing to hear about it and read a news article about dolphin hunting and whaling, but an entirely different thing to see the Japanese officials lying to the camera about the effects of mercury and how concentrated the mercury is not only in dolphins and other large predatory fish, but in their own people!

The crazy thing about this whole situation is that is appears almost to boil down to pride. Do the Japanese hunt whale and dolphin as a rebellion against the West telling them what to do all the time? Like a frustrated teenager, Japan is fight back irrationally when challenged. Or is it something more? A unique kind of logic that we cannot readily grasp in our hemisphere – as spoken in the film, its “not about money, its about pest control. They are being told by the government dolphins are eating too much fish in the ocean”.

Please also see Bluegrass Blue Crab’s excellent post at Southern Fried Science for a much more scientific review that brings a whole new perspective from her training in toxicology and sociology.

Purchase The Cove on DVD at Amazon.