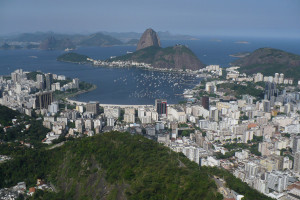 Thursday saw an early morning arrival of a bleary-eyed american to Rio de Janeiro. After making a somewhat easy trip through immigration and customs and picked up my bag (containing suspicious looking molecular biology contents that no one in the US or Brazil seemed to mind) Vitor, an old buddy from grad school days at Penn State, picked me up at the airport and whisked me away to Copacabana. Rio is an interesting city. The contrast between the “haves” and the “have nots” is blatantly stated. Completely run down nieghbourhoods are only separated by a police station from the nicer parts of town. In Rio, its not exactly clear where the tough parts of the city are. There is no distinction between the “bad” part of town and the “good” part. Run down neighbourhoods are deposited in little pockets around the sprawling city.

My hotel was in Copacabana, one of the more desirable and expensive areas to live. Though still not completely safe, I was unchallenged as I walked the main streets after dark. My brazilian friends kept teasing me that they would take me somewhere to get mugged so that I didn’t miss out on the “real Rio” experience! Needless to say, I am glad I was able to miss out on that experience…

After a nice strong brazilian double expresso, Vitor took me up into the mountains to see the famous Christ the Redeemer statue and to get some amazing views of this beautiful city of contrasts. Unfortunately, the Lord did not reveal himself to me (yet again) as he prefered to shrouded in clouds. But I can attest, that is one big Jesus! We wandered around a bit lower on the mountains and found some amazing views of they city. I could see the famous futbol stadium where the Brazilian team plays, and several famous area of town, like Ipanema which made me think of the great song about a girl there…

Vitor had to go back to work so I rested a little in the hotel room and walked around the streets taking in the sights, sounds and most importantly the smells. Every corner had a shop selling pastries and freshly baked goods. I decided to take in a very delicious mushroom pizza. I asked the waiter for something brazilian to drink. He did not disappoint an made me a strong Caipirinha. It is a sweet drink made from Cuchaca, a local rum, and crushed limes. It was very nice, I’ve had several more since then. Afterwords, I met up with Angelo, a brazilian deep sea colleague who had just moved to Rio a month ago from Sao Paolo for a new job as a benthic ecologist. Angelo did some cool work studying communities of animals that lived on organic matter that falls down to the deep sea, such as a wood and kelp, but also did some work on whale fall animals in Dr. Craig Smith’s lab in Hawai’i. We walked around till we found an appropriately affordable bar to sit down in. We drank giant-jesus-statue knows how much Chopp (brazilian for Budweiser in my opinion), ate some fried seasoned fishballs, and talked about science in Brazil, stable isotopes, and lots of other great discussions. By the time I got back to the hotel, Karen from the The Beagle Project was checking in and I forced a Caipirinha into her from the hotel bar before heading off to bed.

6 Replies to “Darwin and the Adventure Day 1”