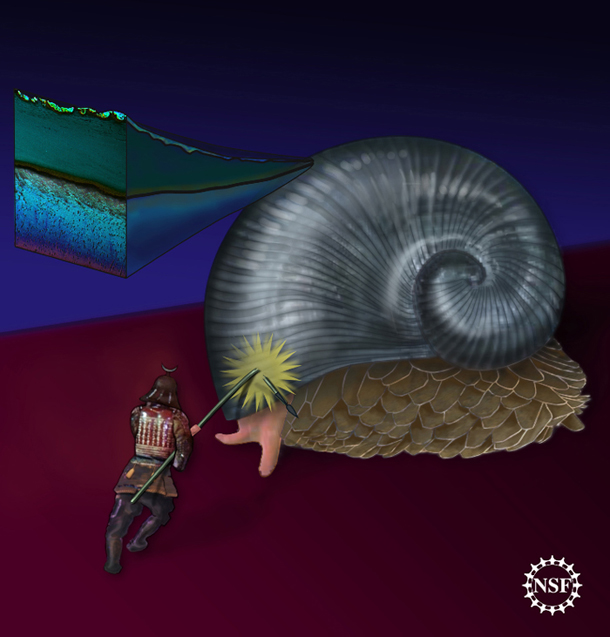 Behold the Samuel Jackson of snails, i.e. one bad mother

It is told in the Hagakure: The Book of the Samurai

At the time of the attack on the castle at Shimabara, Tazaki Geki was wearing very resplendent armor.  Lord Katsuhige was not pleased by this, and after that every time he saw something showy he would say, “That’s just like Geki’s armor.” In the light of this story, military armor and equipment that are showy can be seen as being weak and having no strength.  By them one can see through the wearer’s heart.

Among snails, i.e. gastropods, the shape and ornamentation of the shell can vary dramatically.  On one end of the spectrum, species of Murex possess long slender spines that serve as “resplendent armor” against predators who might swallow them whole. The shell can be more than just armor to prevent snails from turning into dinner. Spectacular spines and ribs are common among gastropods and while Lord Katsuhige maybe unappreciative of the showy, the shell is a barrier against the outside world and in turn reflects the constraints the environment imposes on it. While some snail shells are globular and smooth to reduce drag, preventing crashing waves from dislodging them from a rock, others are heavily ribbed and racheted to aid in burrowing.

The shell is secreted originally as a liquid by the mantle, a thin skin-like organ that lines the shell.  Epithelial cells in the mantle secrete proteins, called conchiolin, and  polysaccharides that form a special matrix that provide the perfect environment for crystals of aragonite, a type of calcium carbonate, to form.  The mantle is also responsible for secreting the ions necessary to build aragonite. 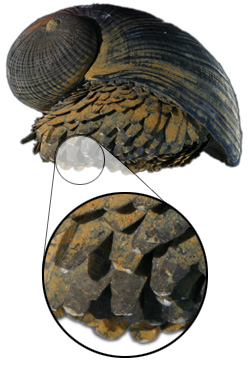 “Iron cladding” along the foot of C. squamiferum

In 2003, a rather unique gastropod was described from a hydrothermal vent in the Indian Ocean.  What caught scientists attention was not the shell, a rather plain marginally ribbed shell that would have pleased Katsuhige, but a series of armor plates covering the soft parts we often refer to as the foot.  Each of these scales, 1/3 an inch long, posses a core of pedal tissue lined with a mineralized layer of conchiolin embedded with iron sulfide granules, the stuff of fools’s gold.  This is the only known animal to use iron sulfide as skeletal material. This is one of the reasons why it was #4 in our top 27 deep sea species.

Seven years later, Yao and colleagues suggest we were taken by the “showy”  scales and should take a closer look at the shell.  Much like the scales, the snail Cyrsomallon squamiferum (cyrso-gold, mallon-rather than, squami-scales, ferum-iron, “Not quite gold, iron-scaled” snail, my personal preference is for either the iron-clad snail or the fool’s gold snail) incorporates iron sulfide into the outer layer of the shell.  The middle layer was found to be a quite thickened organic layer similar to the outer protein covering, the periostracum, of some other snails.  Like other snails the inner layer is composed of aragonite. This three layer structure is unique among snails and unknown in any natural made armor.  Yao and colleagues taking cross sections of the shells and using nano-scale testing methods (fancy!), were able to gather data that let them build a computerized model of the shell.  In virtual reality, the researchers then “poked the shell with a big stick”. The iron-clad snail’s shell is resistant to a penetrating attack by either a predator or miniature samurai.  Each of the tri-layers is responsible for “a distinct and multifunctional role in mechanical protection”.  The figure below from the paper highlights the roles for each layer.  Of course, the authors suggest that the findings may inspire developments in civilian and defense applications. 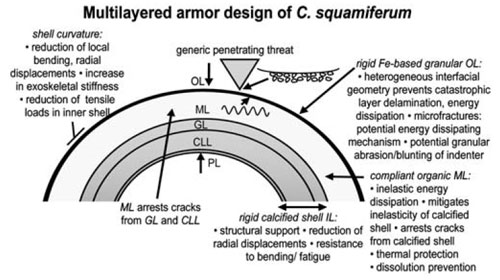 Instructions for building your very own super snail. From Yao et al. 2010

Also catch Ed Yong’s dated and slightly inferior post from three days ago. ;-) and KZ’s post on another hydrothermal vent snail that although not iron-clad has more hair than Robin Williams.