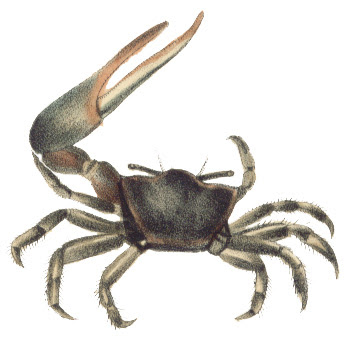 Everyone knows that all crabs moult. Its no secret. When you wear you skeleton on the outside, its difficult to find the room to grow. Every now and then crabs and other arthropods (as well as a few other phyla) shed their exoskeleton or cuticle, resorbing the Calcium held in it. They secrete a new exoskeleton that’s a little bigger, reusing the calcium from the old one, letting them grow a little more from the inside out.

The exoskeleton of crabs is made of a long-chain polymer called chitin (to the right). It’s a sturdy material and a decent defense against many would-be predators. But it might not be only for growth that crabs moult. There are studies demonstrating the crabs have excess heavy metals in their exoskeleton and it’s hypothesized that moulting may be a mechanism to rid the crab of these potentially toxic heavy metals. Metals could be bound and woven into the chitin matrix, then removed with the crab’s moult.

A recent study by Bergey & Weis, published in Marine Environmental Research, examined the distribution of Copper, Lead and Zinc during postmoult and intermoult times. These metals are common the Atlantic estuaries where Uca pugnax is found. All creatures need some amount of trace metals for various physiological functions, such as enzyme cofactors, so why are some heavy metals harmful to crabs? It turns out that heavy metals disrupt several other processes. For instance, mercury can cause sluggishness, lack of responsiveness, premature egg dropping, and alter larval swimming behavior. Cadmium may alter larval development and metabolic rate. In crabs though, high loads of heavy metals can disrupt moulting, limb regeneration, coloration, impair reproduction and alter glucose levels (references in Bergey and Weis). Yikes, lets get rid of this stuff!

One way is to excrete it out with the rest of the waste products, such as ammonia, across epithelia or gill (see Weihrauch et al. 2004). But then this would be processed through several organ systems and tissues which could potentially be harmed by the metals along the way. Another way is to hide it away somewhere where it can be relative inert and slough off a large portion all at once. Sort of like bulk trash pickup day when the undergrads leave for the summer.

Bergey & Weis studied two populations of fiddler crabs from New Jersey, land of excess of toxicity. One population was inside a large, protected salt marsh (the clean population). The other population was collected outside of a sewage outfall (the polluted population), described as a site

“surrounded by industrial sites, a sewage treatment plant, and a major highway. Oil spills… and possible leachate from landfills have also been a source of organic contaminants”

Quite brilliant actually, the crab already has the genetic machinery to moult. It seems to me an fascinating evolutionary story to visualize. Crabs that were able to make physiological adaptations to concentrate damaging heavy metals in their cuticles or exoskeletons had more viable offspring than those who sequestered the metals and let it damage their tissues and reproductive system. Of course zinc and copper are enzymatically important metals and are in much higher demand, which may be why the authors disn’t see much elimination of these two elements. Lead has no known vital function in fiddler crabs.

One thing I kept thinking about when reading this was whether these crabs ate their moult. When a crustacean moults, it is unarmored and vulnerable. In fact, many crabs don’t even bother feeding or coming out from a good hiding spot for a month while they wait for their new exoskeleton to harden (helped along by the recycled Calcium). The benefit is lost if crabs eat their moult. This is a common practice in insects as the moulted exoskeleton may provide a first post-moult meal before retreating to safety to harden the carapace. Some hermit crabs, including the coconut crab, are known to eat their moults. It would be interesting to see a comparative study of several different types of crab from polluted vs. clean sites that are known to eat or not eat their moults. Also, perhaps doing a similar study on crabs that are known to ingest moults and have a treatment allowing them eat and treatment removing moults (not allowing them to eat) to see if metals are being reingested from the moult. 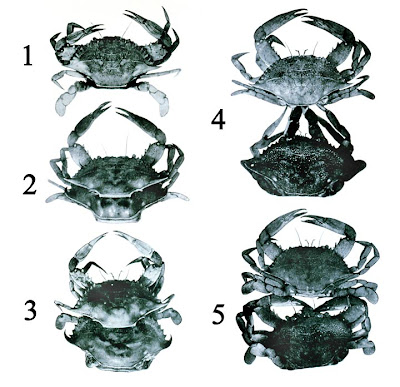 Ecdysis, or moulting, of Callinectes sapidus, figure from Wikipedia Commons.