An occasional series where I briefly report 3 new studies and tell you why they are cool!

How could not think of the colossal squid as a voracious hunter of the deep?? Contrary to popular opinion Rosa and Seibel argue that

You know, you can throw whatever fancy schmancy energetics models you want at it, call it a wuss and sit back in the comfort of your armchair ivory tower talkin’ all you want. But lets be honest do you really want to be in the water WITH RAZOR SHARP TENTACLE HOOKS AND 4 cm RAZOR SHARP BEAKS!!1?1!1!? A slow creature does not a wuss make. Mara Grunbaum agrees.

Why is this study cool? Its a freaking Colossal Squid!

The Velvet Belly Lantern Shark (Etmopterus spinax) is an exception to rule of bioluminescence in fish. Instead of harnessing bioluminescent bacteria or using a system of photophores and shutters, lantern sharks use photogenic cells on their underbelly (see ‘d’ on the image to the left) under hormonal control. Light emission is triggered by prolactin and melatonin, but it is postulated that the hormones act as a mechanical trigger, like an iris, instead of a chemical one because of a close affinity between the lantern shark’s photocytes and other elasmobranch’s melanophores, a pigmented cell that controls color changes.

Claes and Mallefet applied the hormones Prolactin and Melatonin to the skin of lantern sharks. They found that both hormones stimulated the luminescence (see c-i and c-ii to the left), but melatonin had a longer-lasting, more intense effect and resulted in a greater transparency index.

Why is this study cool? This is the first instance of bioluminescence under hormonal control and may have been an evolutionary carryover from shallow-water crypsis. 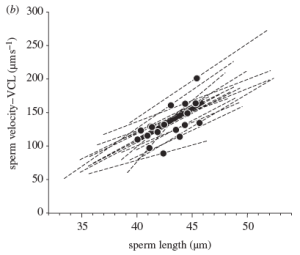 Sperm. Males produced gazillions of these flagellated little wonders. They race to the egg and the first one in gets the honor passing its copy of genetic information on to a potential offspring.

Sea urchins have been used as a model organism to study reproduction for a while now (about the only thing an echinoderm is good for ;p). As Fitzpatrick and colleagues state:

“Selection imposed through sperm competition is commonly thought to promote the evolution of longer sperm, since sperm length is assumed to be positively associated with sperm swimming velocity. Yet, the basis for this assumption remains controversial, and there is surprisingly little intraspecific evidence demonstrating such a link between sperm form and function.”

Why is this study cool? As it turns out variation in sperm length was greater within a single ejaculate of a single individual than among males of the urchin Heliocidaris erythrogramma. Evolution for the fastest swimming sperm may select for longer sperm.