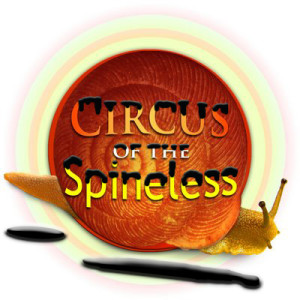 The Circus of the Spineless is now past 50 editions. This is one of the longest survived blog carnivals out there thanks to an awesome community of invertebrate enthusiasts! Before we start this edition though, I would encourage readers to observe a moment of silence for the all the spineless wonders out there that are affected by the oil spill in the Gulf of Mexico.

There is no doubt that the oil spill has affected the charismatic vertebrates of the ocean, such as dolphins and Kemp’s Ridley sea turtles, as well an entire way of life for humans – those vertebrates who use tools to interact awkwardly on the seas. But the melancholic psalm of those less seen always seem to go unsung. The Boston Globe’s Big Picture photo essays have done an amazing job capturing the disaster and the human, wildlife and ecosystem dimensions. In it, the photographers did manage to sing a small verse in honor of our spineless brethren: an oily-winged dragonfly, a hermit crab blackened and sticky, a crab and a jellyfish struggling in the ooze.

This month’s contribution are as diverse and colorful as a rainbow in a… slick of oil.

David from the Atavism highlights one the top ten species of the year, the deep-sea carnivorous sponges!

My own contribution is on the evolution of sponge spicules, those strange silaceous and carbonae-o-liscious biomaterials that hold up the consortia of cells we love and know the Poriferan.

Dianne at the Hill-Stead Museum’s Nature Blog posts a wonderful article about children, their love affair with earthworms, and Charles Darwin.

Zen at NeuroDojo (HAI!) wonders, in light of some claims by PETA, if octopuses really do feel pain the same way mammals do.

Dave write at his Natural History Blog about the beautiful Pacific Sideband Snails. While they are covered in black, I assure you it is not oil.

Blackbird from BugBlog tells all about spider social behavior. What can be more fun than a ball of spiderlings!?

Over at Les Fruits de Mer there is a whole crustaceous world out there waiting to be explored at your local pier!

Andrew at Southern Fried Science created the Rimicanoe (with help from yours truly), a biomimetic canoe designed like a a deep-sea hydrothermal vent eyeless shrimp. I explained some of the anatomical characteristics of the vessel here on Deep Sea News.

Ted from Beetles in the Bush has had up to his hairy scape with complicated ant identification keys and has created a much easier to follow example in his new revision to the formicidae of North America.

Mike of the 10000 Birds blog puts down his Bird Guide to Ecuador for a moment and uncovers muchas mariposas in reserva Mangaloma.

Amber from Birder’s Lounge has set down her telephoto lens and picked up a macro lens discovering the (even more) awesome world of Macro Vision!

Fred of Fragment from Floyd brakes for butterflies, especially sufficient sums of swallowtails.

Arati wonders about the splotchy ladybug found in their backyard.

Roberta uncovers a conundrum about ants and their reaction to pine resin. Some love it and some hate it! Read on to find out if one ant’s poison is another ant’s medicine.

Dragonflywoman posts an epic waterbug-eating-fish post complete with video! Not one to miss.

Over at Kind of Curious, we have fuzzy brown moths in what I think resemble pre-midnight-food-eating gremlins. He needs a little help on the ID though, so go show off your mad moth taxonomy skills.

JSK at Anybody Seen My Focus? has two butterfly posts for us! The Eastern Comma and the Question Mark – I hear they evolved by punctuated equilibrium (drumroll, cue canned laughter).

That’s it for this wonderful edition! Next month will be hosted at Kind of Curious. Send submissions to KindOfCurious2000 at gmail.