We at DSN are very proud to introduce Dr. Holly Bik as the newest full time member of the DSN team. Holly recently contributed the wonderful post to DSN Invisible But Not Forgotten about the impact of the oil spill on nematodes. We are very excited to be increasing our ranks and to class the place up a bit with Holly’s presence.  Although it probably will not be long before Kevin and Miriam corrupt her. 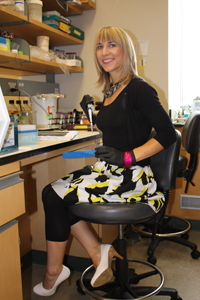 Without further ado…in her own words…

Dr. Holly Bik is a Postdoctoral Researcher at the Hubbard Center for Genome Studies at the University of New Hampshire.  Despite working in a genetics lab, she is marine biologist and molecular ecologist at heart—although occasionally she must convey enthusiasm about C .elegans in order to appease colleagues.    Her current research is using next-generation sequencing technologies (454, Illumina) to study the community structure and phylogeography of meiofaunal eukaryotes in marine sediments, with a specific focus on deep-sea habitats.  Holly is a strong advocate of integrative biology, aiming to merge expertise and synthesize historically disparate fields such taxonomy, molecular biology, and computer science.  Her doctoral research focused on nematode phylogenetics and evolution in the order Enoplida, an early-splitting group of worms proposed to represent the ‘ancestral nematode’

Prior to joining the world of blogging, Holly participated in a number of outreach programs, including ‘Nature Live’ meet-a-scientist events at the Natural History Museum, London and ‘Researchers in Residence’, a National UK program that places early-career scientists into local schools.  She also owns at least 50 pairs of shoes (and counting).