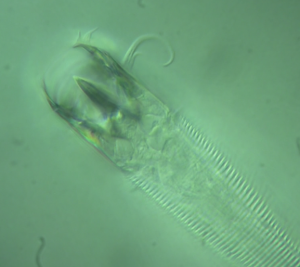 I’m sure you’ve noticed by now how much the media loves tug-on-the-heartstrings images of oiled birds, dead fish and mile-wide slicks.  But have you heard about the millions of casualties in every square foot of mud?  The news reports overwhelmingly fail to mention how this oil disaster is affecting a keystone group in marine ecosystems—nematode worms.  Ok, so they’re not quite as cute and cuddly (unless you have a certain fondness for minute specs on a microscope slide), but this large and diverse phylum pretty much runs the show in marine sediments.  Nematodes account for 85-95% of the organisms inhabiting deep-sea ooze (Gage & Tyler, 1992) and are hugely abundant, with 100,000 (abyssal plains) to 84 million (intertidal mud) worms living in every square meter (Lambshead, 2004).

There’re also quite cool to look at, with lots of interesting morphology—don’t you dare let anyone tell you that they “all look the same”:

Why should we worry about things we can’t see? 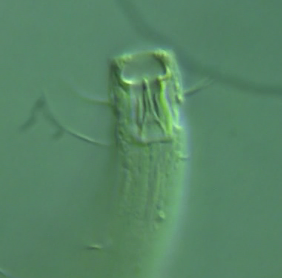 The precise impacts of the Gulf Spill on meiofaunal communities are unclear, but the few facts don’t look promising.  Nematodes (shockingly!) don’t like oil; tar particles cause significant mortality and community abundances show an immediate, sharp decline in response to hydrocarbon stress (Danovaro et al. 1995).  Chronically polluted sites have distinct community structures, and long-term exposure appears to reduce both the trophic diversity (feeding types) and number of genera present (Wang et al 2009).  Meiofaunal communities after the Amoco Cadiz (a “measly” 1.6 million barrels, compared to probably 3 million barrels and counting in the Gulf) were still depauperate 2½ years later, with the strongest lasting effects seen in estuarine mud (Boucher 1985).  There is no data on how deep-sea benthic communities might be affected, but all those dispersants are great for bringing oil down through the water column.  The deep-sea doen’t have the same high-energy hydrodynamics as intertidal habitats, and decomposition processes occur much slower with increasing depth—meaning oil will continue to stagnate in this ecosystem for much longer.

What I find most sickening is that we don’t even know what we’re losing.  At least we can name the species of dead fish, count the losses, and use our extensive biological knowledge to study impacts and recovery.  For smaller organisms, no such luck—we don’t know anything about their biology, life cycles or reproduction.  Out of an estimated 1 million to 100 million nematode species a mere 5% of total estimated diversity has been described, representing the largest taxonomic deficit for any group of animals (even bigger than for insects, Hugot et al. 2001).  Nematodes don’t have any obvious means of dispersal and many species are regionally restricted (De Mesel et al., 2006).  Any given deep-sea region may harbor a trove of endemic species and unique genetic diversity—it’s a horrifying thought, but the Gulf spill may be silently erasing thousands of years of nematode evolution.

So next time you see a picture of an oiled vertebrate, spare a thought for the worms.  Nematodes might be uglier, tinier, and in desperate need of a PR specialist, but the marine ecosystem can’t function without them.

Hugot JP, Baujard P, Morand S (2001) Biodiversity in helminths and nematodes as a field of study: an overview. Nematology 3:199-208

9 Replies to “Invisible But Not Forgotten”