A professor once told me that if you removed everything from earth and just left the nematodes you would still recognize the outlines of everything.  I have absolutely no idea if this is even remotely true.  I do know that, hyperbole aside, nematodes represent one of the most abundant forms of life on earth.  The phyla represent well over 28,000 described species of freshwater, marine, terrestrial, and parasitic round worms.  On the seafloor they account for 85-95% of the organisms.

If we assume that 10,000 is the cap for global nematode diversity, how many species do we have to still describe?  About 9400.  In a recent study, a group of nematode biologists conducted a comprehensive review of the literature and discovered that 638 valid species of deep-sea nematodes belonging to 175 genera and 44 families are described.

However, many, many more are waiting description whether you believe the 10,000 or 1,000,000 estimate.  Consider this all we know about all deep-sea nematodes is based on a meager 473 samples that cover a bottom area of 60-70 meters square, about the area covered by a small house.

What is alarming is not the meager amount of deep-sea sampled, although a concerted effort is needed for exploration, but rather that the number of papers describing new species is actually half what it was decade ago and a third of decade before that. 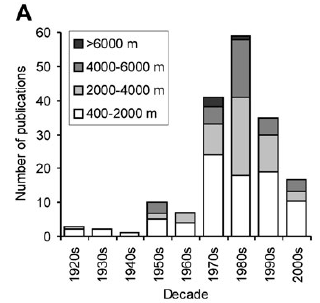 With technological advancements and continued exploration of the deep, why is the description of new species not increasing?

Because fewer and fewer scientists are interested in describing species.

The biological sciences have devalued taxonomy as field and as such few positions are available for doing this kind of work.  We have entered a positive feedback loop, where the end result is that we are actually retarding science.  Species are going extinct before we can describe them and ultimately we are culpable.

We are ass deep in a biodiversity crisis and we are getting it in both ends.