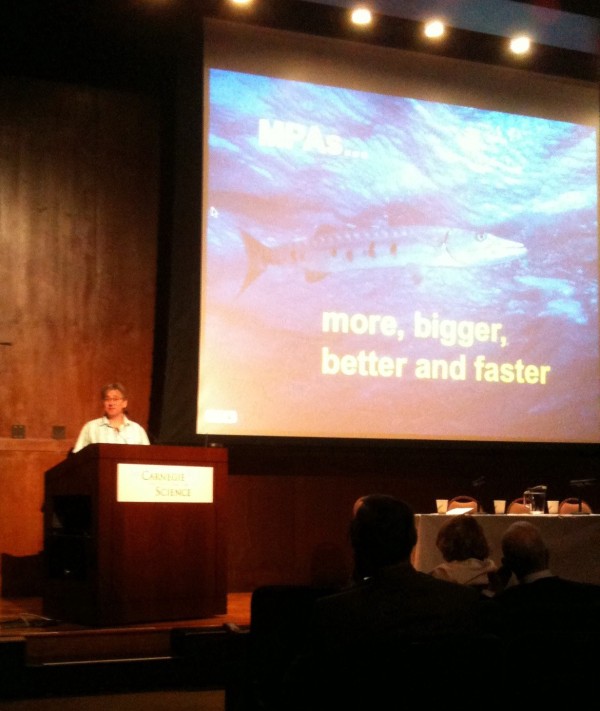 Professor Callum Roberts of the University of York, England, with his MPA mantra in the background.

Get your minds out of the gutter, pervs!  We are talking about marine protected areas (MPAs) here!

I’m fresh back from a quick trip to DC where I attended the 2010 Kathryn Fuller Science for Nature Symposium.  This year’s topic was right up my alley… New Perspectives on MPA Performance: Linking Knowledge to Action.  Organized by WWF and hosted at the beautiful Carnegie Institution for Science, the symposium drew conservation practitioners from around the world to discuss what we know and (perhaps more importantly) what we need to know about MPAs as a conservation and resource management tool.

I was happy to see many of my colleagues from DC as well as Indonesia, the Philippines, the Caribbean, and from as far as Eastern Africa in attendance.  And the entire proceedings were webcast around the world for those unable to attend.  In fact, I was delighted to see that the organizers paid more than just lip service to online participation by proactively drawing webcast participant questions into each q&a segment.

So what did we learn?  Well, if we were looking for validation of MPAs as effective tools, we came to the right place.  From Prof. Callum Roberts keynote intro and call for more MPAs, “More, Bigger, Better, Faster!”, to Sylvia Earle’s keynote closing where she debuted never-before seen hypothetical maps of the oceans at 15%, 30%, and 50% protection, this was an exciting meeting.

The most frequently cited study, Biological effects within no-take marine reserves:
a global synthesis, a meta-analysis of 149 peer-reviewed scientific publications published between 1977 and 2006 of 124 different marine reserves located in 29 countries, demonstrated that the abundance, diversity, biomass, and size of fishes, invertebrates, and seaweeds increase dramatically (sometimes increasing 10 or 20 times) inside marine reserves.

The papers’ lead author, Dr. Sarah Lester from the University of California, Sana Barbara, presented a drill-down of the findings:

The figure to the left from Lester’s study, appeared in no fewer than four other presentations throughout the day.  Talk about the rock and roll star treatment.  And justifiably so!  Lester’s work creates a compelling argument for the rapid escalation of MPA creation around the globe–or to paraphrase Prof. Roberts, we need more MPAs, we need them bigger, better designed, and we need to speed-up the process.

Keep in mind that a meta-analysis is not an actual scientific study, but rather a systematic review and statistical examination of a collection of related scientific studies.  As such, I tend to have an innate skepticism of meta-analysis results. We’ve all encountered troublesome meta-analyses over the years; analyses where bad studies may be included or where the data summarized may not be homogeneous.

Lester certainly cops to some of the limitations of her analysis, “We note a general lack of peer-reviewed reserve publications from certain regions of the world. Reserves exist in these locations, but it is difficult to assess whether implementation and enforcement are effective or whether these reserves can only be considered ‘paper reserves.’ “

On a separate front, Lester’s analysis appears to have a sample bias towards nearshore habitats and may not adequately address the performance of deep sea or pelagic MPAs, “The vast majority of reserves in our data set protect nearshore rocky or coral reef habitat, indicating a lack of marine reserve studies (and potentially marine reserves) in certain habitat types (e.g. soft sediment). This is particularly important for the interpretation of our comparison of tropical versus temperate reserve effects—while we have strong evidence that tropical and temperate reserves are similarly effective for reef ecosystems, we do not know whether this result holds for less structured habitat types. “

Nonetheless, Lester’s study is an important contribution that should provide a strong argument for the power and efficacy of MPAs to assist in managing marine ecosystems.