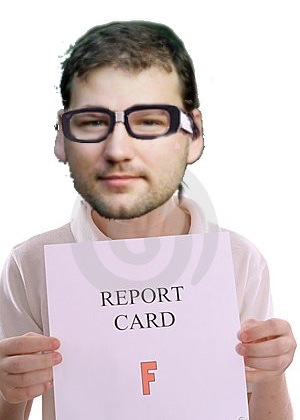 Here’s a hypothetical you parents out there should appreciate:

[In the comments section, the teacher tosses you some modest relief by mentioning your child has “terrific penmanship.“]

So, what’s your reaction?

Do you wallow in shock and disappointment?  Do you cast blame on anyone other than your child or yourself–failing grades are a failure of the teacher, or the school, or bad influences from your child’s peers? Do you look for behavioral, emotional, or learning challenges within your child?  Do you pooh-pooh grades as an imperfect metric of academic competency? Do you take stock of the internal and external contributions to little Kevin’s performance and formulate a plan to proactively address them with your child and teacher?

I pose this hypothetical as it seems somehow fitting in the wake of the release of the 2010 Report Card for the Mesoamerican Reef: An Evaluation of Ecosystem Health, a publication produced by my colleagues at the Healthy Reefs for Healthy People Initiative (HRI). For the second time, the Mesoamerican Reef–second largest barrier reef system on the planet–has received mostly failing grades.  And like the hypothetical scenario in my intro, our response to this report card will largely determine the ultimate outcome.

The 2010 report card is the second diagnostic report produced by HRI, the first having been released in 2008.  That 2008 report card was the first comprehensive regional snapshot of coral reef ecosystem health and the impacts of resource management efforts across the extent of the Mesoamerican Barrier Reef, a continuous barrier reef complex that extends over 1,000 kilometers from Mexico’s Yucatan Peninsula south along the entire coast of Belize to the Bay Islands of Honduras.

In order to translate an abstract notion such as “ecosystem health” across the extent of the Mesoamerican Reef into a measurable, integrated set of criteria that can provide an accurate snapshot of any segment of the ecosystem at any moment in time, the HRI team developed a reef monitoring protocol that assembles data into an Integrated Reef Health Index.  This index considers factors such as coral cover (percentage of reef surface covered in living coral), macro-algae cover, presence of algae-grazing fish, and presence of commercially valuable fish.  Taken as a whole, these criteria paint a remarkably comprehensive picture of ecosystem function, value to coastal communities through the benefits received from healthy ecosystems, and positive responses resulting from resource management efforts.  As the HRI team describes the Integrated Reef Health Index in the report card, “It is our “bottom line” of reef health, akin to the Dow Jones Index in the stock market—not an exact measure of any particular stock, but a very useful indicator of general market trends.”

That original Report Card awarded failing grades to the Reef.  More than half of the 326 sampled reef sites were in ‘poor’ or ‘critical’ condition.  Of the remaining reef sites, 42% reported in ‘fair’ condition, with a mere 6% of the Reef  listed in ‘good’ condition.

It’s worth pointing out that the 2010 Report Card only sampled 130 reefs across 4 criteria (coral cover, algal cover, herbivorous fish, and commercial fish).  The 2008 Report card monitored 326 reefs using seven criteria, including coral recruitment (presence of new coral colonies following sexual reproduction), macro-algal height, and presence of Long-spined sea urchins.  These criteria were cut from the 2010 monitoring protocol as they were not consistently collected at all sites in the 2008 monitoring efforts.

Is the continued drop in ecosystem health depicted in the 2010 Report Card possibly attributable to greater resolution in the surveys conducted in the two years since the last report card, or perhaps an artifact of reduction in criteria used to assemble the 2010 Simplified Integrated Reef Health Index?  I asked my colleague and friend Dr Melanie McField, the Belize-based Director of the Healthy Reefs Initiative , and she was quick to respond, “No.”

“If we limit the analysis to the 50 core sites – exact same places in 2006 and 2009 – we see overwhelming decline (5 times more sites declined than improved).  So there is decline. Note the actual data values in the table (colored boxes below).  You can see how fish biomass in Honduras and Mexico has especially declined.  This was due to average [fish] sizes being smaller, not a big change in numbers of fish.  Some of this could be observer bias issues.  This year (2009 data)  had the same observer for all 3 countries and is solid.  We think some samples from 2006 may have over-estimated [fish] size a bit in Honduras.  Overall, the declines are there.  But, not for coral.   Notice it’s about the same. Small improvement.”

So irrespective of which criteria are used to assemble the Integrated Reef Health Index, the results show more reef deterioration and call for stronger action on the part of reef resource managers regionally.

I asked Melanie whether she thinks that the 2010 Report Card will be the wake-up call  policy-shapers, coastal businesses, and local communities along the Mesoamerican Reef need in order to institute stronger management action.  She responded that this wake-up call is being heard, but it takes time to get the message out fully.  In fact, Melanie is en route to Honduras as I’m writing this post in order to formally launch a Honduras-based Healthy Reefs monitoring and outreach team.

Getting this message out is critical.  The list of threats to reef health continues to grow in scope and intensity. The 2010 Report Card indicates that the four main reef threats identified in 2008 (over-fishing, coastal development, inland land clearing and agriculture, and climate change) continue with growing intensity:

Less than 1% of the fish surveyed in the MAR were over 20 cm (16 inches) long and sharks are now largely absent. The invasive lionfish is now virtually everywhere in the MAR, although efforts to control this exotic species are underway throughout the region.  The coastal development index for 2010 found the amount of modified areas increased from 22% to 34% of the coastal MAR. Climate Change is already impacting the reef and there is little chance of a global treaty that will protect coral reefs. There is a growing risk from increasing interest in offshore oil development.

And yet, even in the face of formidable threats and a gloomy report card, Melanie and others along the Mesoamerican Reef have reason for hope.  Over 60 marine protected areas (MPAs), the best defense we have to protect coral reef ecosystems, are now spread out throughout the region.  Community buy-in and environmental stewardship of coastal resources continues to grow, as witnessed by the business-led Grupo Intersectorial on the Island of Cozumel in Mexico who recognize that healthy reefs mean healthy business.  Or the leadership seen from the Ambergris Caye Citizens for Sustainable Development in San Pedro, Belize who are protecting and reclaiming important mangrove habitats.  Or from the community-created,  managed, and growing Roatan Marine Park Association in the Gulf of Honduras.

These are people and communities undeterred by failing grades.  They aren’t throwing-in the towel, pointing fingers to fob-off responsibility, or dismissing or trivializing the scientific data in the Report Card.  Instead, they are rolling up their sleeves and investing some sweat equity into their “child.”  We should all be so lucky to have such parents.

4 Replies to “Epic FAIL, Wake-Up Call, Turning Point, or All of the Above?”