Time: 9 PM, after a long day in the lab.
Place: Lucha Libre Taco Shop
Internal Monologue:
Bad Miriam: “If I do not have a Surf ‘n’ Turf burrito I will surely perish!”
Good Miriam: “No! Shrimp is bad! You know shrimp is bad! You are a goddamn marine biologist!”
Bad Miriam: “But it is sooooo delicious. Plus it tastes so good with the Super Secret Chipotle Sauce.”
Good Miriam: “Pollution! Bycatch! Habitat destruction! BAD! Bad naughty Miriam!”
Bad Miriam: “Shut the hell up while I eat this best of all possible burritos.”
NOM NOM NOM
The End.

As seen in this short glimpse into my psyche, I understand how hard it can be to eat sustainable seafood. I am fully informed as to the envioronmental cost, and yet I regularly lose my battle against that delicious burrito. It’s just really fun to rebel against a smug environmental scold, whether that scold is your annoying vegan cousin or, as in my case, just your own conscience.

The appeal of thumbing one’s nose at ever-present environmental guilt is why this “Outlawed Seafood” dinner from Boston restaurant Legal Sea Foods is both brilliant and insidious. Via Grubstreet & GG:

There might be a panic over seafood sustainability, but Legal Sea Foods CEO Roger Berkowitz isn’t taking the bait. Instead, he’s hosting a dinner on January 24 with the New England Culinary Guild to address “outdated” scientific findings that turn the dining public against certain species of fish. Behold, a special feast featuring items that people often think are outlawed or blacklisted.

To translate: if you eat this seafood, you are a rebel, an outlaw, going boldly against conventional wisdom. You, like Berkowitz, are not someone who engages in environmental “panic.” Leave that for those annoying the-sky-is-falling (or in this case the-fish-are-disapppearing) environmentalists.

So what is on this rebellious outlaw menu? According to Grub Street:

Well, DAMN. That sounds great. Ever since I fell off the kosher wagon I would eat a shoe wrapped in prosciutto, never mind delicious fresh fish. And please sign me up for anything involving duck cracklings.

Except there’s one problem. Every single one of these items – black tiger shrimp, Atlantic cod, and Atlantic hake, are listed as AVOID on the Monterey Bay Seafood Watch Guide. Black tiger shrimp is listed primarily for the incredible habitat destruction that farming it wreaks on mangrove forests and artisanal fisheries, and U.S. Atlantic cod and white hake* are listed due to severely depleted populations.

What does Legal Sea Food CEO Roger Berkowitz know that the researchers at Monterey Bay don’t? I called Legal Sea Food to find out. (I also contacted New England Culinary Guild, but they said I needed to attend the dinner to ask these questions, which I will totally do if someone wants to fly me out to Boston.)

I spoke to Rich Vellante, Executive Chef of Legal Sea Foods, who designed the menu around these seafood items. Mr. Vellante said that seafood sustainability is a complex and confusing issue. “In my opinion there’s no right or wrong. This is about people trying to educate each other…we want to make decisions make decision based on sourcing and not broad brush everything.”

According to Vellante, the cod and hake are locally sourced from the Gloucester and Chatham MA and Portland ME fisheries, and are caught by day boats using hook and line, not trawls. Vellante also emphasized that in the case of the cod, they were featuring the cheek meat, a cut often overlooked by American consumers, so they were using a greater portion of the fish.

In regards to the shrimp, Vellante said that Legal Sea Food did send people to Vietnam to inspect the shrimp farming operations and that there were “certain stipulations” that had to be followed, but he was uncertain about the nature of those stipulations and referred me to the Legal Sea Food marketing department. I called twice but was unable to reach the person he referred me to. I will post an update if she gets back to me.

So what does the latest, non-outdated science say about Legal Sea Food’s claims? (You may also be interested in food writer Jacqueline Church’s post on this.)

Black Tiger Shrimp. According to Seafood Watch, these shrimp should be avoided due to habitat destruction and pollution. Conveniently, a study of the environmental consequences of shrimp aquaculture in Vietnam was published just this June. The province discussed in the paper, Can Gio, has undergone mangrove restoration after having been deforested in the 1960s-1970s, and a section is now a UNESCO International Biosphere Reserve. The area devoted to shrimp farms has leveled off over the past 6 years, which means that new mangroves are not currently being destroyed for shrimp farms.

However, the study found that significant water pollution results from shrimp farming in Vietnam, and that many farms released wastewater and contaminated sediment that violated Vietnamese water quality standards. Not all farms did this, but on average, shrimp farms effluent had such high nutrient concentrations that it was similar to agricultural fertilizers. This level of pollution is extremely damaging to surrounding marine environments.

Therefore, while ongoing mangrove destruction may not be a current issue in Vietnam, severe pollution of the remaining and restored mangroves by shrimp farms is an ongoing problem.

Atlantic Cod: When I began researching this, I was surprised to learn that as of this year 2010, Gulf of Maine cod is no longer classified as “overfished” by the National Marine Fisheries Service (NMFS). This is because spawning biomass (basically the number of fish times their weight) is at half of target levels. This graph provided by NMFS looks pretty cheery, since it only looks at cod populations since 1982, but if cod stocks are compared to historical levels, current cod populations are truly pitiful.

This figure is from a paper by Rosenberg et al. 2005 (PDF), which used  historical research methods and population modeling to estimate the biomass of cod on Canada’s Scotian Shelf in 1852. The blue dot is estimated cod biomass on the Scotian shelf in 1852, and the red line is cod population today. 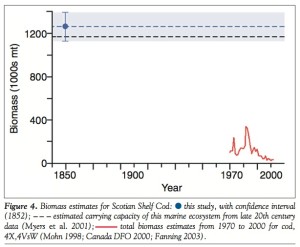 Looking at that, it’s pretty hard to argue that cod populations are just fine. Nonetheless, I commend Legal Sea Food for buying from local, hook-and-line fishers. Trawling is undeniably damaging to benthic ecosystems.

Hake. As of 2006, hake was in a pretty sad state. This graph of biomass is from the NOAA stock assessment, showing that hake populations are at less than half of what they were in the 1980s.

As of 2004, NOAA found that hake was overfished, and that overfishing was still occurring. I was unable to find a more recent assessment.

The only case of “outdated scientific findings” I could find was that Gulf of Maine cod is no longer classified as “overfished.” I personally would not feel guilty about eating locally caught Gulf of Maine cod cheeks (yum!), but would continue to attempt to avoid black tiger prawn and hake.

And here’s the big picture, as presented in Myers and Worm 2003. This is biomass data from the beginning of large-scale industrialized fishing in the 1960s. (New England/Eastern Canada fisheries are excluded as they were already being exploited).

There are just less fish than there used to be. This means that we need pressure from consumers for effective management – people have to have the correct information about where their fish comes from, and to understand why they should care. Thumbing one’s nose at those no-fun fisheries scientists and environmentalists  is not going to change the fact that fisheries are in serious trouble.

In our conversation, Vellante summarized the purpose of the Legal Sea Food “Outlawed Fish” dinner by saying “I think there are a lot of questions and answers to be had. I don’t think there is one sweeping answer to everything. We want to create some dialogue around that.” Unfortunately, the data show that most fisheries worldwide do have one thing in common – a downward slide.

*Silver and red hake are listed as a “Good Alternatives,” but I think they are referring to white hake, since it is by far the most popular. I will be happy to make a correction if I am wrong.

39 Replies to “DON’T PANIC: Sustainable seafood and the American outlaw”