←Previous Lesson: Lessons from the Census of Marine Life

While the Census of Marine Life may be the most recent call to survey the ocean, deep-sea exploration has a rich, paradigm-shifting history. It has all the makings of a Hollywood blockbuster: colorful characters, high seas action, the drama of antagonistic actions between “men of honor”, you name it! Probably has a bit of romance in there too, but that tends to get left out of the scientific literature. Examining the history of deep-sea exploration is an excellent case study in how technological advances continue to yield new insights and increase our ability to ask better questions. This section of Deep Sea 101 will be composed of 4 parts.

Nearly 2400 years ago Socrates (via Plato) posited of the deep sea:

“… everything is corroded by the brine, and there is no vegetation worth mentioning, and scarcely any degree of perfect formation, but only caverns and sand and measureless mud, and tracts of slime wherever there is earth as well, and nothing is in the worthy to be judged beautiful by our standards.”

Such a damning indictment from such a classical thinker indeed! Curiously, the Greeks and other civilizations during this time were in no position to make such bold statements having an inability to visit and sample past a mere tens of a meters.

It was not until Aristotle we could really call anyone a marine biologist. He dedicated much of his life to describing the life on the Aegean coasts, describing 180 marine species nearly 1700 years before Linneaus. Aristotle was the first person to study form, function, ecology and behavior and developed a classification system based on multiple traits. He is perhaps most famous for describing the mouth parts of sea urchins, which is named in his honor (called Aristotle’s Lantern, at right).

But his enthusiasm for the ocean did not catch on in the ancient period and an attitude of complacency persisted all the way towards the Victorian Era when deep-sea exploration really took off, chiefly out of economic and imperial interests. Echoing the contented ignorance of the time, or perhaps a fear of the unknown, noted historian Pliny the Elder wrote in 40 AD:

“By Hercules, in the sea and in the ocean, vast as it is, there exists nothing that is unknown to us, and a truly marvelous fact, it is with those things that that has concealed in the deep that we are best acquainted!”

It took until the 17th century, during the tail end of the Renaissance, for these unfounded assertions to be even questioned, and by none other than Robert Hooke who stated:

“Animals and Vegetables cannot be rationally supposed to live and grow under so great a Pressure, so great a Cold, and at so great a Distance from the Air, as many Parts at the Bottom of very deep Seas are liable and subject to…

What Hooke has done was twofold. He first provided a set of testable hypotheses for absence of life in the deep sea disguised as common sense. Then, he made a statement hinting that perhaps we ought to actually test this because if past experience shows, common sense might not always be correct.

For the next 100-200 years the deep sea was considered lifeless based on 4 criteria: temperature, light, pressure and stagnancy of the environment (i.e. it was all uniform). The first three of these criteria were well-reasoned, though no one knew what the true depths of the deep sea were. But it was well-known that light was refracted by water and the visible spectrum gets filtered out, the deeper you go the more pressure an organism must bear – this is easily calculated estimating forces, and without the energy from the sun’s rays warming the deep waters it could be reasoned that it must be cold down there. In fact, some early scientists thought the bottom of the sea must be ice.

The last criteria of stagnancy is an interesting one that I am not entirely sure how it came about since they had no direct knowledge of deep-sea life until the mid-1800s. It may have been derived from calculation of the current speeds. Surface currents are wind-driven and any given body of water tends to be stratified, or composed of different layers. The top layer of the water moves at a given speed but experiences drag from rubbing against the layer of water below it. This causes the lower layer to move with the upper layer but at a slower speed because there is energy loss from friction against the seafloor (see figure at right). Because of this, water currents near the seafloor are typically much slower than surface currents. Therefore one can posit that at some depth water speed eventually just stops. This has important implications because animals down there would need fresh, constant input of dissolved nutrients (nitrogen, oxygen, etc.). Stop the flow, there’s no grow!

During the golden age of deep-sea exploration in the 1800s the Azoic Hypothesis of the deep-sea was largely championed by Edward Forbes and was based on his observations in the Aegean Sea, between Greece and modern-day Turkey (map below). I’ll refer to the Azoic Hypothesis as tied specifically to Forbes, but recognize that it had much earlier roots. Forbes was merely the first to study it scientifically. As I’ll go on to explain though, the Azoic Hypothesis was largely the result of common sense thinking, an unfortunate study area, inadequate sampling gear and ignoring previous results.

Though not known at the time, the Aegean Sea was a poor choice for a study site. First of all, it is not very deep and we now know it is not a very productive area away from coastal areas. The map above (at right) shows the concentration of chlorophyll – the pigment used by phytoplankton to capture solar energy to use in photosynthesis – in the Aegean Sea based on satellite measurements. Green to red signify higher concentrations of phytoplankton, and hence higher amounts of surface primary production. Blue is low productivity and you’ll notice that in the center of the Aegean Sea where the deep water is it’s mostly blue, or unproductive. Oligotrophic waters (meaning with few nutrients) are defined as containing less that 80 grams of carbon per square meter. The central Aegean Sea has about 30 grams of carbon per square meter. With very few plankton at the surface, there is very little food that falls down to support the denizens of the deep.

Had Forbes actually been in a productive area he still might not have found much life in the deep because he was using a dredge that was modified from ones used by oystermen. It was inadequately designed to sample the muddy deep seafloor. The mouth of the dredge was narrow and the bag was small. Note the design of the canvas bag (below, at right), there are vents only in middle of the sides. The dredge would immediately fill up with mud and thereafter become a wrecking ball let loose upon the seafloor until it was brought up. Curiously though, and deceptively, Forbes made an illustration of sea creatures all-too-happy to enter into his dredge for his book Natural History of the European Seas (his initials are under the dredge). But the difference between the dredge he used versus this idealized dredge that he illustrated is actually quite important. The illustrated dredge would have been ideal to use since it has a wide mouth and plenty of vents to discharge mud. 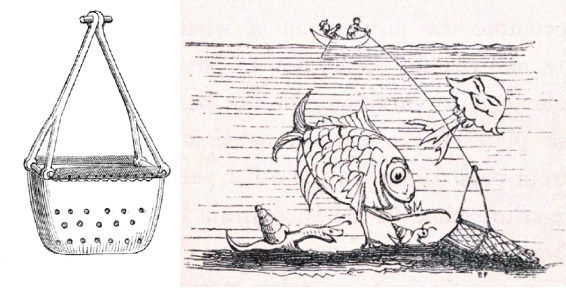 Throughout his sampling, he failed to document life in the deep, but did document very thoroughly patterns of animal abundance with depth. In general, the deeper his dredge dove the fewer organisms he found. He wrote in 1859, the same year as Darwin published On the Origin of Species:

“As we descend deeper and deeper in this region, its inhabitants become more and more modified, and fewer and fewer, indicating our approach towards an abyss where life is either extinguished, or exhibits but a few sparks to mark its lingering presence.”

By means of extrapolation he asserted that life ceased to exist beyond 550 meters. Which probably seemed pretty reasonable to Forbes’ contemporaries. Forbes had went out to sea, carried out an extensive sampling program and had based his conclusions on data. In hindsight we can say that Edward Forbes was ill-prepared to adequately sample the deep sea and had a poor choice of study area, but was his extrapolation just the result of bad luck, or is there more to the story?

Find out in the next installment of Deep Sea 101 as we continue to examine the early evidence for life in the depths during Forbes’ time and enter whom I refer to as the father of modern oceanography, Sir Wyville Thomson!