*Ed. Note: Al’s post was selected by the staff at PLoS One as the April Blog Pick of the Month! Awesome Job Al! – KAZ

(Oh boy, have I been looking forward to writing this post! This one is 2 years in the making)

Like a lot of biologists, I get to see some really cool stuff, from the kaleidoscope of a tiny diatom on a polarised microscope, to the mass spawning of corals on the Great Barrier Reef, but today I get to tell you about hands-down the coolest biological phenomenon I’ve ever seen.  Is it the rainbow of jeweled fishes of the coral triangle?  The cacophony of an Antarctic penguin colony?  The staggering diversity of the rain forest, perhaps?  Nope. It’s called the afuera aggregation and it’s the largest gathering of whale sharks anywhere in the world.  By a lot.  And today I can tell you about it because today a scientific description of this fantastic event is released.  Our paper isn’t rocket surgery, just a simple description of a previously undescribed but spectacular biological happening.  AND, it’s open access, so please follow this link and read about the science for yourself. 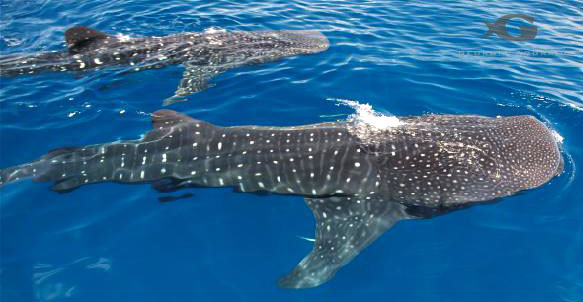 To help set the scene I need to take you on a trip to the flat, karst beauty of the Yucatan Peninsula of Mexico in the summertime, in the state of Quintana Roo.  Real tropical summer too; not the namby pamby Zone 6 or 7 stuff so many of us experience back in our temperate homes, but the oppressive blanket of sweltering tropical stillness that smothers you in equal parts humidity and blinding UV. You know the sort, where going outside is like being slugged in the face with a pillowcase full of batteries, the breeze has gone somewhere else to escape the heat, and every day comes with a side of thunderstorm at 5PM.  It’s during these sorts of dog days that the whale sharks appear.

They usually show up north of Isla Holbox, off the northern tip of the Yucatan where it juts to the northeast, as if Meso-America is reaching out to Cuba just 90 miles away in the  Caribbean.  This is a special place.  Earlier in the Spring, ocean currents brought water north from Belize, past the resort towns of Tulum, Playa del Carmen, Cozumel and Cancun, until they ran out of coast and curled northwest around the tip of Cabo Catoche to form eddies that spun up onto the shallow Yucatan Shelf.  Those eddies brought with them figurative gold in the form of nutrients from the depths: upwelling.  Those nutrients funded blooms of algae and other phytoplankton in a process far more widespread at higher latitudes than it is in the tropics.  The phytoplankton were then grazed by zooplankton like copepods and sergestoid shrimps and it is these tiny crustaceans that the whale sharks come to eat.  And eat they do, from June to September: dozens of animals cruising lazily amid the rich green waters of Isla Holbox, grazing their fill, much like the sunburned vacationers at Cancun’s all-inclusive resorts.  They’re joined by a host of other species that also enjoy the bounty, too: tuna, sailfish, turtles, cownose rays, dolphins, manta rays and devil rays.  It’s a real hive of biological activity, a fact which was, surprisingly, only recognised perhaps 15 years or so ago.  Apparently, local fishermen knew the whale sharks were there for years – they even followed them as bellwethers of good tuna or cobia fishing – but it had never come to the attention of scientists that a special biological event was taking place so close to the coast.

'Scuse me, comin' through

Amazing as the Holbox whale shark gathering is, it is NOT the afuera. No, the afuera gathering is something altogether different and even more incredible and to see it you must go a little farther offshore (“afuera” is Spanish for “outside”, in this case “offshore”) .  Once or twice in recent years, whale sharks have gathered farther to the southeast, in the deeper, clear blue water east of Isla Mujeres and Isla Contoy.  In these special years, the afuera gathering forms, and an unparalleled biological congress takes place.

I first heard about the afuera firsthand in 2009 and will never forget it.  My colleague Rafael de la Parra from Project Domino (a consortium of groups interested in whale shark research and conservation) called the aquarium and said “Hola, we saw 10 whale sharks today”.  He had spotted them from a plane as part of some aerial survey work we were collaborating on regarding whale shark sightings in that area.   A few days later it was something like a cheery “We saw 50 whale sharks today”.  A few more days after that an ecstatic “We saw 150 whale sharks today!”. Later his tone started to became more reverent “We saw over 200 whale sharks today”.  Eventually the word came (by email if I remember) that they had seen 421 whale sharks on a single survey flight!  We were all stunned.  Over 400 animals, each between 25 and 35 feet long, and all in a patch of clear blue ocean the size of a few football fields (see Figure 4 in the paper).  In comparison to previous afuera gatherings from as far back as 2006 and in comparison to the few-to-dozens of animals that are seen at other famous whale shark aggregation sites like Belize, Ningaloo and Utila, this was clearly something out-of-the-box.  What could draw so many animals to such a small patch of otherwise featureless blue ocean?  Had this ever happened before and, if so, how was it not noticed?  The questions came as thick and fast as the whale sharks themselves. 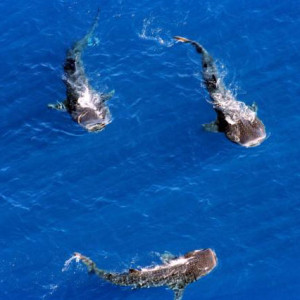 Oscar Reyes took this photo at the Afuera

I missed seeing the afuera myself that first year, but luckily it formed again last year and I was able to see it and to work with colleagues from Project Domino, Georgia Aquarium, the Smithsonian and Mote Marine Lab to characterise this incredible event and to describe it in the paper that has now been published in PLoS One. The afuera gathering really starts not with whale sharks but with tuna – little tunny (Euthynnus alleteratus) to be precise – spawning during the night in a huge as-yet-unseen shoal.  Even though we have not seen them, we know the tuna are there because we have collected their eggs in plankton tows and our colleagues at the Smithsonian sequenced their DNA using the modern technique affectionately called “barcoding“.  In fact, tunny eggs is all we collected and they were so abundant as to clog the plankton net in as little as 30 seconds.  Such an abundance of energy-rich grub is something no self-respecting whale shark could pass up, and so they gather to feed. And feed. And FEED.  The tunny spawning event must be a substantial group because it supports hundreds of whale sharks for several months of uninterrupted, unadulterated nom-nom.  We thus not only discovered an incredible whale shark gathering but, indirectly, an important scombrid spawning event that was previously unknown to science, further highlighting the importance of the Yucatan region as an important nexus of biological activity, and one worthy of significant conservation efforts. 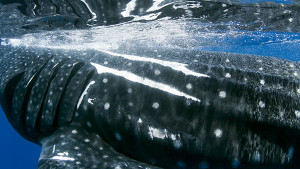 A near miss with a boat just scraped off some skin; imagine a cruise or cargo ship's impact

Even though it was only discovered a few years ago, the afuera aggregation is already subject to intense tourist pressure.  “Whale shark watching” ecotours were previously operating out of Holbox and Chiquila and it didn’t take long for those operations to propagate to Isla Mujeres and Cancun, in much closer range of the afuera site.  These businesses are small, dynamic, somewhat cooperative (captains constantly report sightings over the radio and everyone rapidly converges) and highly responsive to the animal’s behaviour.  They’re also one of the biggest potential risks to the whale sharks because the high powered boats used to reach quickly the offshore sites can certainly injure a whale shark.  Indeed, with so many boats (we counted over 40 one day) and so many whale sharks feeding right at the surface, it’s a near statistical certainty that hulls and propellers will contact sharks at some point unless careful precautions are taken.  Not to mention the cruise ships and pineapple container ships that ply the waters in the area; just one of those could do terrible damage if it plowed into the aggregation.  Now that we know the animals are there, therefore, it’s essential that responsible management of the resource ensue; approaches to consider include mandatory prop guards, demarcation buoys and species protection efforts, but public education and general awareness will also be critical.  CONANP, the Mexican government’s protected resources agency, will continue to play a critical role with regards to statutory controls, as they did when they established the whale shark biosphere reserve for the Holbox aggregation in 2009.  Ultimately though, rules and regulations can only do so much in the face of human motivations that are not the same as those of the animals in question.  Humans will always win in any conflict with an animal species, so stakeholders hold the fate of this spectacular phenomenon largely in their hands,  and the ecotour operators in particular have a chance to set a fine example of careful stewardship of what is truly one of nature’s rare gifts.

The whale shark ecotour fleet returns to Isla Mujeres: that's a lot of pressure for such a rare event

The afuera aggregation, and whale shark gatherings everywhere, are among the most incredible marine biological events there are.  In a world where seeing one of these behemoths in a lifetime of SCUBA diving is lucky, seeing dozens or hundreds in the same place at the same time is something worth cherishing forever.  And all of this takes place close to one of the most developed and yet still enjoyable resort areas in the Caribbean.  It’s been a privilege to witness it, study it, publish the results, and describe our experiences here.  I hope that one day you too get to experience the whale sharks of Quintana Roo, and that they engender in you as much awe and respect for the wonders of the ocean as they have for me. 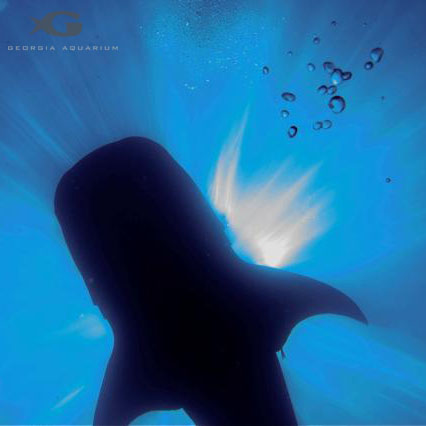 Isn't this worth protecting?

20 Replies to “Inside the Outside”